Washington DC is such a historical and tourist-driven city that you would think every hidden gem has been unearthed and spit-shined to take a selfie with, and every quirky fact has been examined. However, there are still some facts that are not known to the majority who visit or even live in DC. Some of these are in the heart of the monuments, museums and tour guide trivia, and others are right in front of the massive crowds’ eyes and just go unnoticed. Here are 15 things you might not have known about America’s capital.

What’s better than a building filled with paintings? A building turned into a painting. Artist Alex “Hense” Brewer took up the task to turn the SW neighborhood into an arts district by turning the old white canvas of the Friendship Baptist Church into a technicolor mural and community arts center. 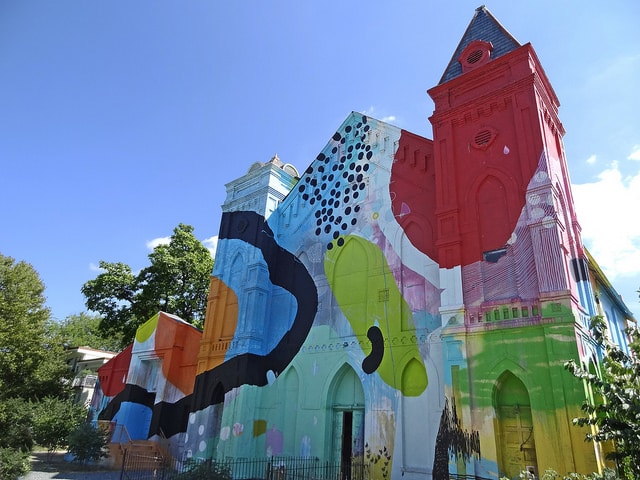 The Washington Monument is two colors

Off-white and pearl? Bone and ivory? Well, regardless of the colors’ names, the contrast is unmistakable once you are up close, and especially on a rainy day. After about a third of the way up this monumental obelisk, the stone changes color. It is supposedly because the project’s funding ran short early on, so they had to change the type of stone they used to a less expensive alternative. Or it could be part of a freemasonry conspiracy theory since the Washington Monument is the tallest freestanding masonry structure (yes, another infraction).

Could you imagine if that’s what we called the White House? A morose grey house holding the leader of United States definitely wouldn’t have the glamorous appeal as the lustrous white painted beauty we snap photos of today. I guess it was a good thing the British lit it on fire so we had to paint over the grey sandstone that once was!

Seat for the government

The District of Columbia wasn’t even meant to be an actual city, so the 23rd amendment had to be ratified in 1961 so the citizens of D.C could vote in the presidential elections. It was designed to be a place only for the government and not for the population to live, and now half a million people reside here. Take that, government plans!

Way before there were animal rights organizations and activists, past presidents brought in some pretty unusual pets, many of them gifts from other important people. Some included a pair of tiger cubs given to President Buren by the Sultan of Oman, Andrew Jackson had a parrot who was taught to swear, Thomas Jefferson had two bear cubs; Willliam Harrison, a goat. Perhaps the most notable are the alligators that lived in the White House with not one, but two presidents, Herbert Hoover and John Quincy Adams.

Darth Vader in a church

At the Washington National Cathedral, a gorgeous church with a winding staircase and wondrous edifices, there is another type of grotesque side by side with the gargoyles. You can see an image of Darth Vader clearly outside, as well as inside a stained glass window. The force must have been strong with the architect building this church.

It’s hard to imagine so far back to a time where our alphabet wasn’t finished, and letters were interchangeable due to lack of imagination – or maybe just laziness. J and I were these letters, so the founders of the city didn’t add it to the alphabetic road system. Even Thomas Jefferson signed his named T.I. (not to be confused with the rapper with the same initials).

Or it could be that there are a lot of good wineries around. Regardless of the reason, D.C consumes more wine per resident than any other of the 50 states! For such a small region, that’s a big accomplishment.

President Woodrow Wilson had ended his term during the Prohibition, and he had a hefty wine collection that he valued but was illegal to move. He persuaded Congress to create a special law just for him that allowed the transportation of alcohol by one person from 1600 Pennsylvania Avenue to his home. Talk about the perks of being the boss!

The theater was originally a coatroom. It must have gotten a lot of guests during the winter months! It was later changed to a movie theater, and Jimmy Carter watched 480 movies in there, the most of any president.

Creepy forest in the city

If you go to Palisades Park, and walk toward what looks like a forgotten yard, take a right and you’ll come to the clown from IT who will be your tour guide. Not really, but that’s the only thing this creepy Glass Forest is missing! Take the trail that leads into the woods on your right, and you’ll start to come upon antique bicycle parts, shiny mirrors, and gnarly tree limbs. It’s truly a mix of urban and nature, which is usually not a good thing, but in this case, it has an odd appeal that many find charming.

Walk 18 steps down from the Lincoln Memorial and there it is, a step dedicated to Martin Luther King Jr’s “I Have a Dream” speech, which people often surprisingly miss.