15 Film Posters That Capture The Essence of Washington, DC 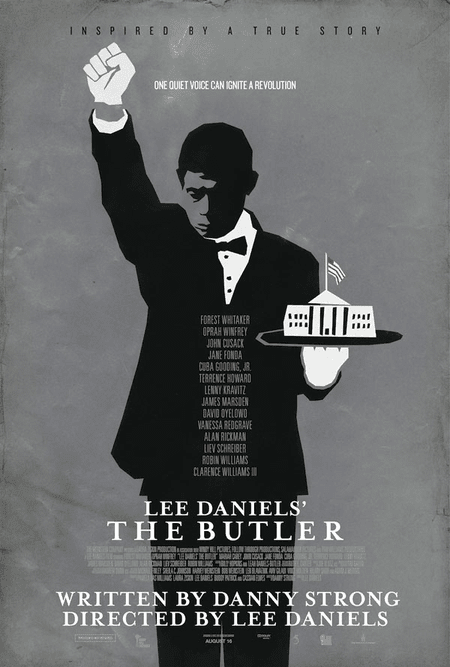 Where corruption is rampant, justice is being fought for. A city of peaceful protests is also where threats are aimed and wars are declared. Where progress happens, so too can you see turmoil. At least, that’s what the majority of movies based in Washington, DC say. Maybe you can’t have one without the other when portraying America’s capital. In a historical city where law presides, business people thrive, politicians conspire, and the starred flag waves high, we see that there is room for fear, and for hope. 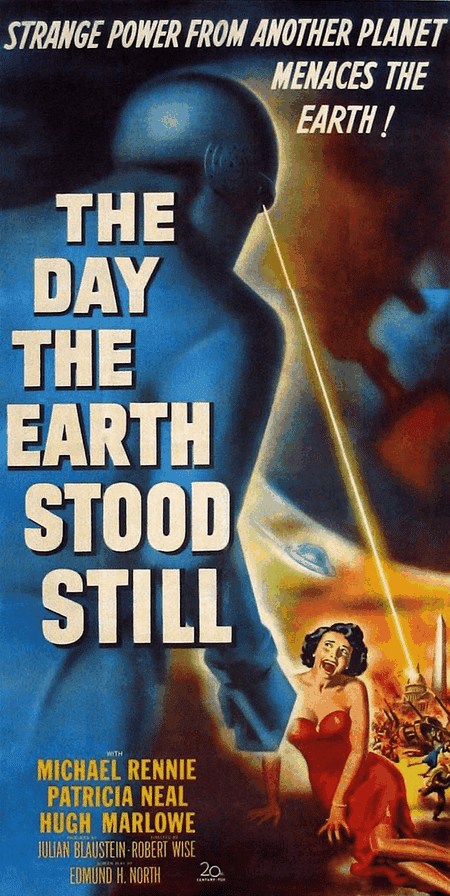 Every leader of a country comes to DC to negotiate with America’s president, so why wouldn’t leaders of a different planet? In the poster for The Day the Earth Stood Still (1951), behind the screaming woman, you can see the robot zap the capital with his laser, while citizens can only scream and run and the military can’t do a thing about it. It might not be a very real fear for the residents of DC, but for those who like their sci-fi, it’s a worrisome thought. 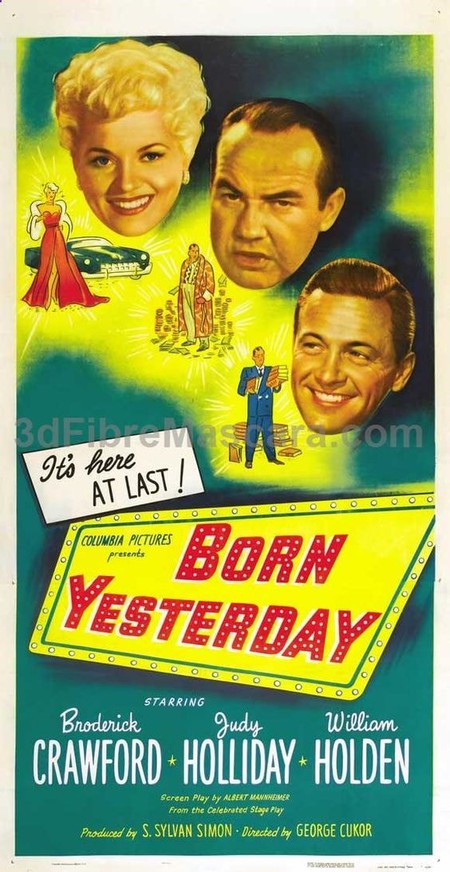 The realistic heads of the actors don’t give us too much insight into the characters of Born Yesterday (1950) as do the cartoons portraying a ritzy bimbo who gets educated and falls in love with the bookworm journalist. She leaves an uncouth, corrupt man with money, who’s in DC to “buy” a few Congressmen. The flashy title and simplistic cartoons underneath the heads make it feel like DC is a place of dreamlike possibilities. 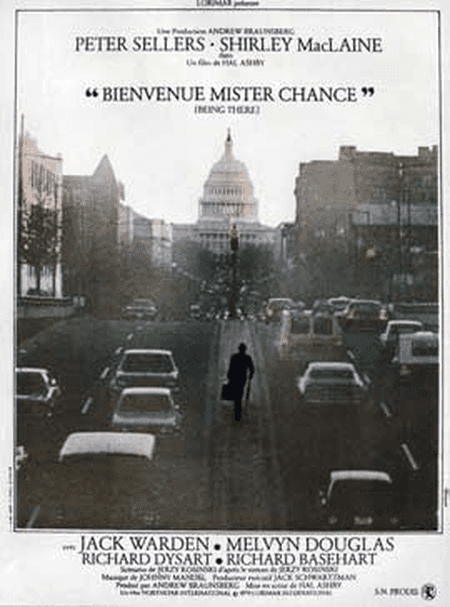 Being There | Movie Poster Shop

Chance, the protagonist in the film Being There (1979), is seen walking in the middle of Capitol Street, having lost the only home he has ever known, which happens to be in Washington DC, a place which proves to be quite affluent and friendly. The shadowed man walking fearlessly and aimlessly in between the bustling traffic seems assured that he will find a new home on his journey, and indeed, everything turns out more than all right for the man with no limitations. 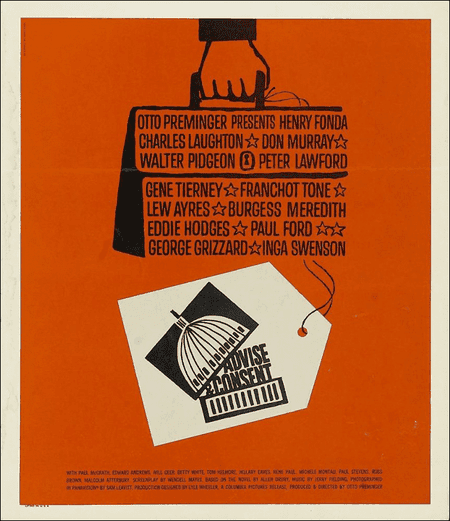 Originally a Pulitzer Prize-winning novel, Advise & Consent was released as a movie in 1962. The briefcase, comprised of the actors’ names, hints to the business setting popular in DC. The tag attached to it holds a picture of the dome of the Capitol building popped opened with the title inside. Advise and consent refers to Article Two of the constitution that states a President can only be appointed with the Advice and Consent of the Senate. 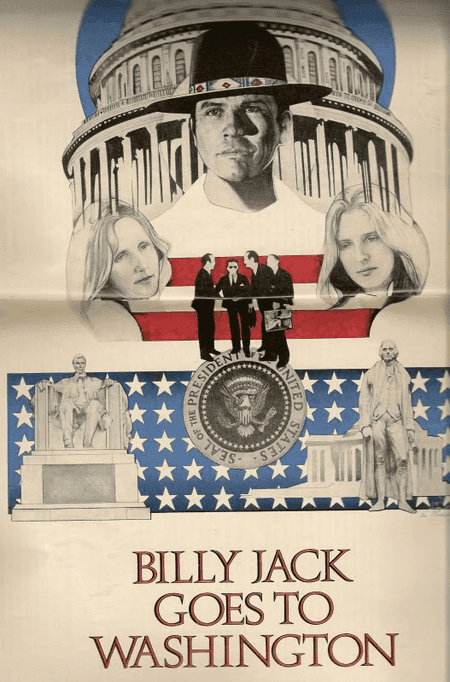 Billy Jack Goes To Washington (1977), a remake of the 1939 movie Mr. Smith Goes to Washington, was not as successful as the prior Billy Jack films. The poster, however, uses the top 10 things that come to mind when you think of Washington DC. The Capitol building, the Jefferson and Washington memorial, red and white stripes, white stars in a blue background, the USA seal, serious women, and businessmen. 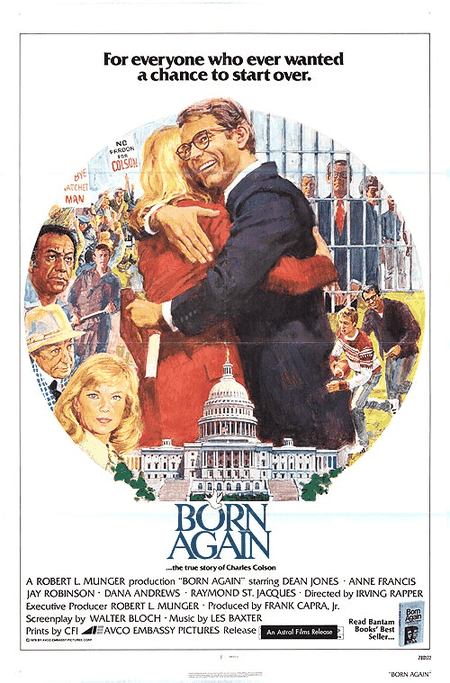 Nothing says DC like a man who makes history in politics, then in scandal, then finds Christ and becomes a writer and founder of fellowships. This brightly drawn poster for Born Again (1978) shows Charles Colson’s rise and fall, and rise again, in DC. Above the title is the Capitol building, a place he surely frequented while he served as Special Counsel for President Richard Nixon. Another depiction shows him in jail for the Watergate Scandal, and the main image is him hugging a woman with a Bible in his hand, showing he’s “born again” and making a killing off of finding Christ. 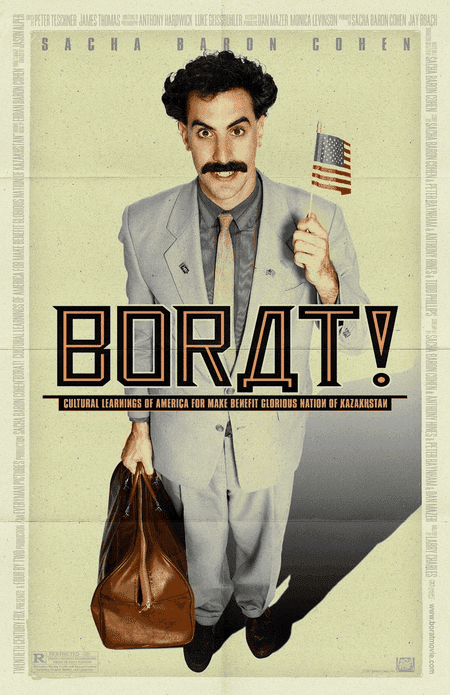 The eager foreigner on the poster for Borat (2006) reminds every DC resident of the constant stream of tourists the city gets each year, and with all there is to see and do, we can’t blame them. It also portrays the immigrants who come here to start a new life. With his suit pressed, luggage heavy, and little toy flag held high, Borat is enthusiastic to see all there is to offer in the home of the free, and innocent to any unfavorable things he may find in America. 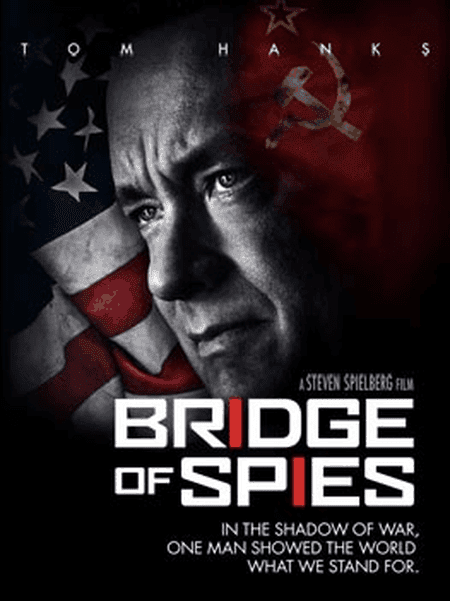 The entire poster for Bridge of Spies (2015), including the protagonist’s face, is worrisome, fearful, and dark. Understandably, since it takes place during the Cold War. Where the leader of the US and CIA headquarters resides, it is a place where alliances and deals are made with other countries. The American and Soviet flags show the tension between the two nations, and highlight the interactions with other countries that are made in the Capitol on a daily basis. Plus, Tom Hanks’s face is about as American as apple pie. 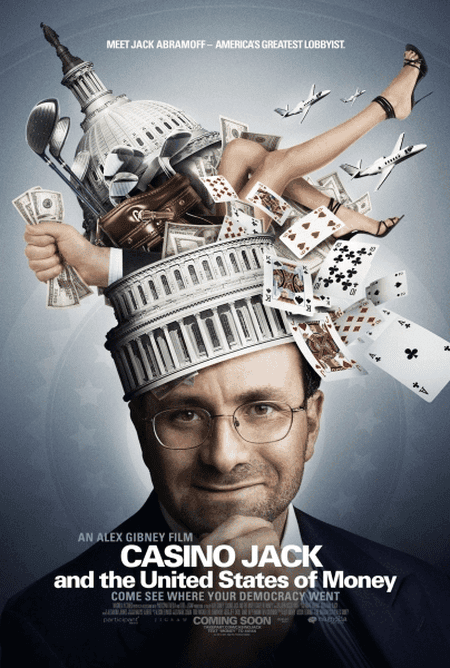 Casino Jack and the United States of Money | © Jo Blo

Corruption and scandal are always close by in Washington DC, where almost all US politicians live. Casino Jack and the United States of Money (2010) is a clever film about the con artist and lobbyist, shown on the front of the poster, Jack Abramoff. When people think of political corruption, they usually imagine the images on the poster, and what was clearly behind his false sense of justice for the people; political favors bought with women, money, golf trips, and private jets. With the exposure of politicians like Abramoff, trusting the representatives of justice in America is difficult, to say the least. 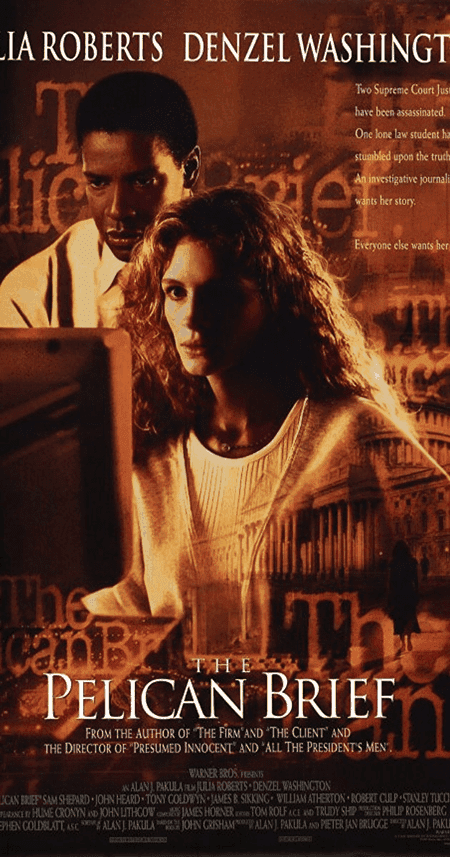 In The Pelican Brief (1993), Julia Roberts plays a law student who writes a legal brief theorizing who assassinated two Supreme Court justices and why. Her letter gets into the hands of the FBI, and people start coming after her, proving her theory right. As we can see by the faded cCapitol building, typewriter typography, pensive law student, and curious journalist, as well as the short synopsis (top right), this is a movie filled with scandal, law, the FBI, and investigative journalism. Never are those things more intertwined than in DC. 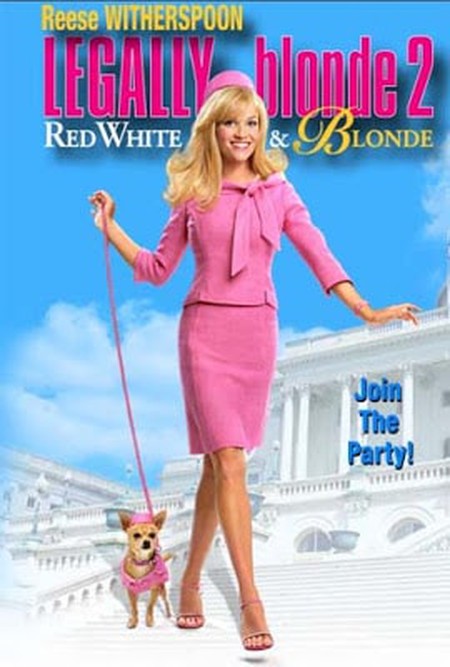 Speaking of law, you can’t forget this film. If the pink and modern women’s business suit Elle Woods sports in this poster for Legally Blonde 2 (2003) doesn’t scream DC, we don’t know what does! Throughout the film, the optimistic Elle is often met with barriers that are typical in DC politics, especially when you’re fighting for a bill to pass, in this case, the freedom of her dog’s mom who is being used for cosmetics testing. 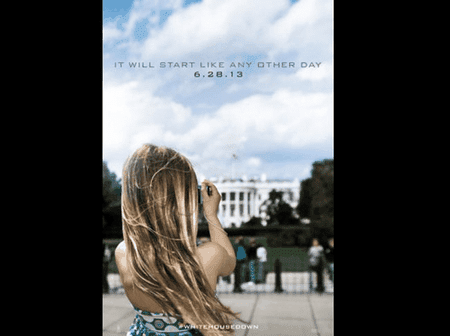 A sharp image of a little girl taking a picture of an unfocused White House is a great representation of Washington DC, thanks to the White House Down (2013) film poster. This is what it means to be a tourist as much as it means to be a resident of the city. DC is a place that you can’t help but take the time to recognize its historical significance and progress. It rings true of not only the place but the time we live in, needing to take pictures of everything we deem important and even the things we don’t. 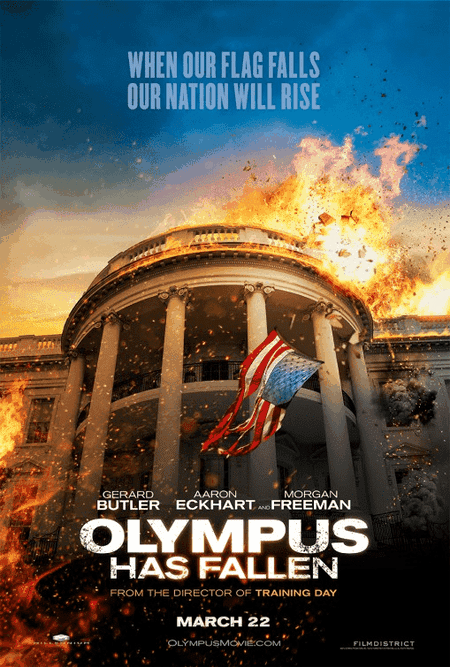 Olympus Has Fallen (2013) gave us a poster depicting a fear for all American citizens because the Capitol represents a home to all who live in the United States. A bombing of the White House is something every resident has probably either talked about or had a nightmare about. Living in the capital is something that can make you feel proud of being American, but also make it feel like you are a walking target. 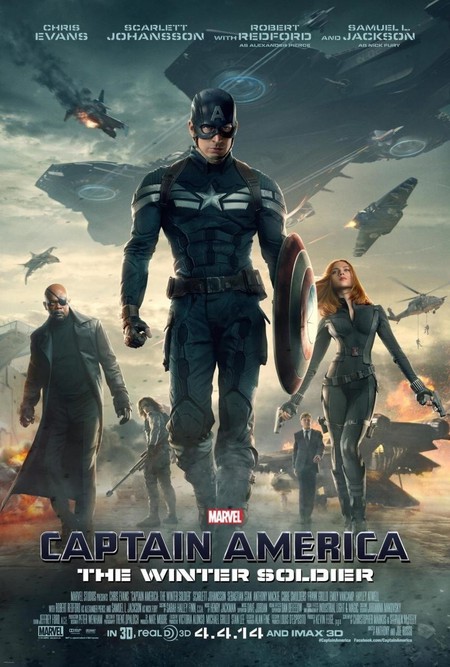 Captain America, with his impenetrable American Flag shield and his American military experimented superbody has been a symbol for America as a superpower since he was first created by Marvel Comics in 1941. This symbolism still lives on in Caption America: The Winter Soldier (2014), where the trio of superheroes shown must find an assassin and uncover a conspiracy in S.H.I.E.L.D., a fictional counter-terrorism group in DC. Although the Captain’s shield is emblazoned with the country’s flag, the heavy artillery, military defense does even more to portray America’s capital.

DC is a place of history, and one cannot deny the African Americans’ large role in that history. Lee Daniels’ The Butler (2013) film poster’s gray backdrop brings focus to the man who is seen as a black and white suit, the uniform of a butler. He serves in the White House, but he also serves his people by standing up for the freedom of his race, shown by his gloved fist in the air and the words “One quiet voice can ignite a revolution”. The only colors are on the American flag, a symbol of the country he serves in his own humble way.