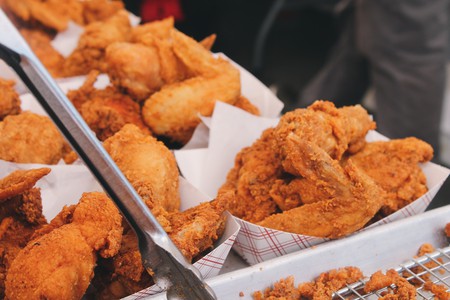 Gordonsville, Virginia, celebrates annually the role that fried chicken has had in the town's history | © Brian Chan / Unsplash

Back in the late 1800s, the small town of Gordonsville, Virginia, became known as the “Fried Chicken Capital of the World.” It celebrates this claim to fame by hosting an annual fried chicken festival, usually on the third Saturday of May.

The History of Fried Chicken in Gordonsville

Gordonsville’s fame as the world’s fried chicken capital can be traced back to the 1840s when the town became a stop on the railroad. Gordonsville benefited from the business and visitors that the Virginia Central Railroad and Alexandria Railroad brought into town. It saw thousands of Union and Confederate soldiers pass through its streets. One of the town’s buildings served as a Civil War hospital, and it later became a hospital for newly freed slaves during the Reconstruction period.

Following the Civil War, the railroad continued to shape Gordonsville’s identity. The town remained as a rail stop even when ownership transferred to the Chesapeake & Ohio Railroad. And the townsfolk of Gordonsville—specifically, the women from Gordonsville’s African-American community—saw an opportunity and seized it. That’s when the chicken crossed the [rail]road.

To make money, the women sold fried chicken to rail passengers. When passenger trains stopped at the town, the women, who later became known as “chicken vendors,” would balance plates of fried chicken on their heads and serve the passengers by passing the fried chicken to them through open railcar windows. This continued as late as around 1914. Even when passenger trains started using dining cars and no longer had food come in through the open windows, the town of Gordonsville would have chicken ready for the dining cars to pick up.

What to Expect at the Chicken Festival

While passenger trains no longer stop at Gordonsville, the town sought to commemorate its infamy as “the chicken leg center of the universe” by hosting an annual festival. The highlight of the festival is a fried chicken cook-off, with the top three winners getting small cash prizes, along with bragging rights.

But this small-town festival in central Virginia is not just about food. In 2017, Gordonsville added a 5K race to the festivities so that visitors could burn some calories preemptively. The festival, held on the fairgrounds of the Gordonsville Fire Department, also features a wine garden, a pie contest, craft and artisan vendors, face painting and bounce houses for the kiddos, and live entertainment.

If you need to take a break from eating chicken, then check out the Civil War museum in town. The Civil War Museum at the Exchange Hotel is the town building that served the wounded of the Civil War before it became a hospital for newly freed slaves.

Gordonsville is also about 18 miles (28.9 kilometers) northeast of Charlottesville, and the Barboursville and Horton Vineyards are nearby.