The Top Things To Do And See In River District, Richmond 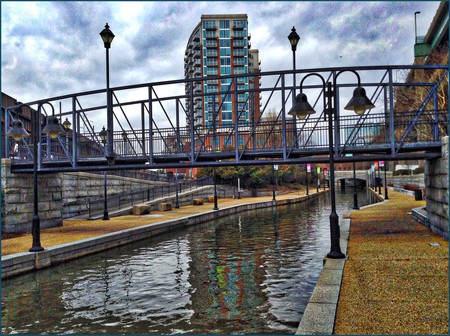 Situated on the shores of the James River, the River District of Richmond, Virginia is one of the city’s most beautiful neighborhoods. Striking historic architecture provides the backdrop for a surprisingly young and vibrant urban culture that revolves around outdoor recreation and an infectious desire to create. Here’s a list of the top things to do and see in Richmond’s River District.

To really get a lay of the land, head over to the American Civil War Center at Historic Tredegar to start your Canal Walk along the Haxall and Kanawha canals of the James River. This one-and-a-half mile self-guided walk will take you through 400 years of Richmond history by way of medallions, exhibits, and monuments set up periodically along the way. Not only will the experience be educational, but the views from the waterfront make the trek worth it. While the views from the banks of the River District’s canals are uniquely wonderful, nothing quite compares to seeing the city from the James River itself. Between April and November, visitors can enjoy an informative 40-minute tour, or private charter, of the James River and Kanawha canal, part of a larger canal system built in 1789 upon George Washington’s request, all from the comfort of a 35-seat covered boat owned by Riverfront Historic Canal Cruises. Tours conveniently leave every hour from the Turning Basin on Virginia Street. Connected to the Canal Walk, Brown’s Island Park, a manmade island located on the border of the River District, is the perfect place to spend a warm afternoon. Pack a picnic and take in the views. Visible from the park’s shores are Belle Isle, the Manchester Bridge, the Richmond and Petersburg Railroad Bridge ruins and the Rivanna Subdivision Trestle. Art displays and musical performances are also customary sights. Originally designed by Thomas Jefferson and home to Virginia’s General Assembly since 1788, the Virginia State Capitol is one of the U.S.’s oldest governmental buildings. The Capitol is open everyday to the public and free tours are offered of the building and the surrounding Capitol Square. Tour highlights include a marble statue of George Washington by Jean-Antoine Houdon, as well as a view of the Executive Mansion – the oldest governor’s residence in the country that’s still in use. There’s also the opportunity to view a legislative session from one of the public audience rooms! Museum
Facebook
Email
Twitter
Pinterest
Copy link
Share
Since 1922, Richmond’s Edgar Allen Poe Museum has drawn book lovers from all over the country to learn more about the enigmatic American writer. Housed in the Old Stone House, the museum is located just blocks from Poe’s first home and job at the Southern Literary Messengerin the early 19th century. The museum’s collections feature manuscripts, letters, memorabilia and personal belongings of the famous writer, as well as a look into the state of Richmond during the time period in which Poe lived.
Give us feedback