The Most Haunted Sites to Visit in Norfolk, VA 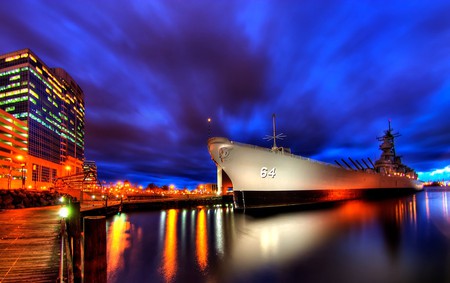 Norfolk has experienced countless battles, fires, hurricanes and diseases over the last several centuries. Time has gone on, but restless souls still roam this Virginia city, and intriguing tales of hauntings are more popular than ever. Wait until the sun goes down before exploring these spooky spots!

Over the last several centuries, downtown Norfolk has seen many fires. The city has burned to the ground at least twice and very few colonial-era buildings survived. Built in 1739, St. Paul’s Episcopal Church is one of the structures that withstood the multiple fires, wars and natural disasters. A cannonball, fired centuries ago by Lord Dunmore after his defeat at the Battle of Great Bridge, is still lodged in the church’s exterior brick wall. Allegedly that isn’t the only remnant of a bygone era; spirits are said to visit the church regularly, the most popular being Dr. Nicholas Albertson Okeson. Okeson, who tragically died of Malaria in 1882, is said to appear in the church’s graveyard around twilight, walking peacefully by the tombstones, making sure all is well.

Opened in 1913 as the crown jewel of the Wells Brothers’ Beaux Arts theaters, the historic Wells has some ghostly history. A crew member named “Ned” fell to his death after becoming tangled in stage rigging, and his spirit allegedly still roams the theatre’s backstage area, often blamed for missing props or doors being locked. Crew and cast will often be heard shouting “Stop it, Ned!”

The show must go on! Tonight's performance of PRIDE & PREJUDICE is continuing as planned, so please be cautious while driving. The sidewalks are clear downtown, so get ready for a night out with Elizabeth and Mr. Darcy! #WellsTheatre #DowntownNorfolk #NorfolkVA #PrideAndPrejudice

The Battleship Wisconsin is the largest ever operated by the U.S. Navy. Now a museum berthed downtown Norfolk on the Elizabeth River, it serves as a reminder of the city’s proud naval history (Norfolk is also home to the world’s largest navy base.) During the Korean War, a ship mate was working on the broken air conditioning system. Someone accidentally turned on the unit and sadly ended the young man’s life. Reports of the deceased’s spirit were documented in a testimony from a quartermaster 2nd class serving on board during Operation Desert Storm:

“I’m walking past the Harpoon launchers [port side] and you get that feeling that you’re being watched? So, I turn around thinking it’s the aft lookout, coming to me for something, so I stop and turn around and look and there’s this bright white wispy shadow there behind me. Now, it’s the midwatch and there was no moon that night. It was pitch black. You couldn’t see your hand in front of your face it was so black. And there is now this billowy white shadowy sort of thing floating behind me.”

Built in 1873, Freemason Abbey Restaurant was used as a church for 75 years until, in 1948, it became a meeting hall for the Independent Order of Odd Fellows. In the early 1980s the church was converted into a restaurant and since then there have been numerous accounts of paranormal activity. The kitchen is particularly alive with spooky visitors who brazenly open and close cabinets, push items off of shelves and lock doors. Dark figures have been observed roaming the restaurant after the dinner crowd disperses, and some report hearing the faint sound of a woman weeping.

Dinner in this 1873 church was a memorable experience. #virginia #norfolk #freemasonabbey #thanksgiving2017🦃🍂🍁 #dinner

The Ghost of Willoughby Spit

A grey mist in the shape of a man manifests on the beaches of Willoughby Spit in Norfolk just before a tropical storm or hurricane. It is said he comes in peace to forewarn residents of impending danger. Stories of the mysterious dark figure were reported just before Hurricane Isabel in 2003.