The Best Hotels to Book in Richmond, Virginia 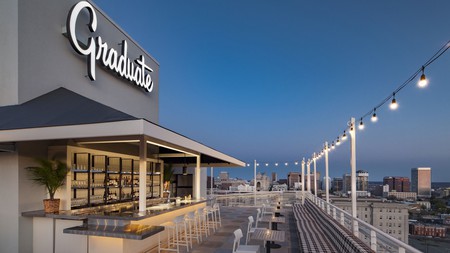 Richmond, Virginia, is a vacation destination with plenty of historic sites and attractions to discover. Explore the city’s heritage at the American Civil War Museum and the Virginia State Capitol, followed by a movie at the classic Byrd Theatre. Afterward, get a good night’s sleep at one of these top hotels in Richmond – bookable on Culture Trip.

Virginia Crossings Hotel and Conference Center, for golfing and gardens 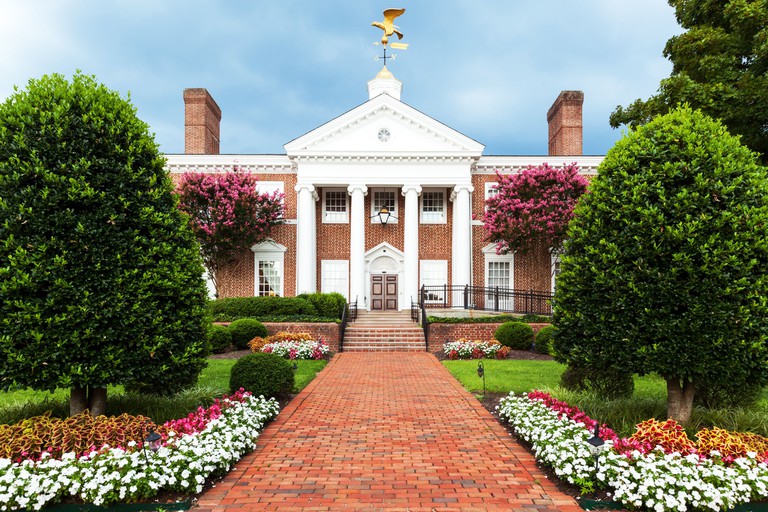 English gardens and old-world architecture fill this 20-acre (8ha) resort, distracting you from any worry that tries to wiggle its way into your vacation. Virginia Crossings Hotel is an exceptional retreat where your stress will melt away – unless you’re trying to chip your way around the water hazards at the Crossings Golf Club next door. You will receive discounted greens fees, though, which should give you some respite if you sink one in the pond. 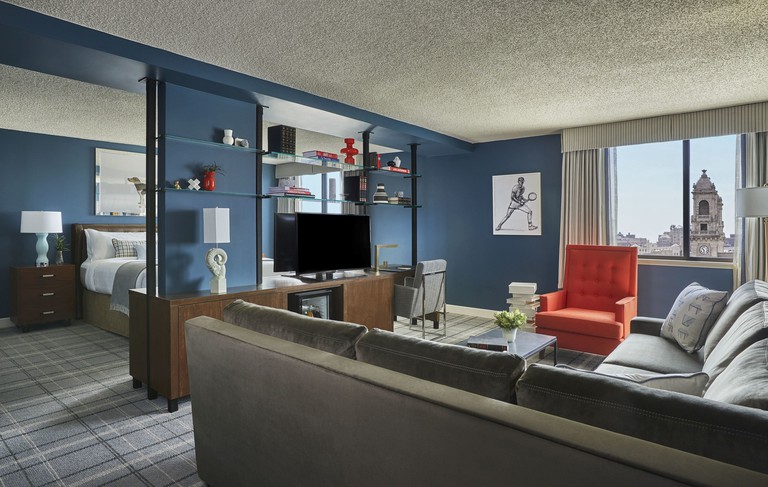 It doesn’t matter what marks were on your report card – you’re headed to the front of the class when you stay at the Graduate. This hotel in Richmond is an A+ accommodation for Virginia Commonwealth University Rams fans. The Byrd House is a rooftop pool with a bar and 360-degree city views, where you can sip, socialize and swim – basically everything you used to do when cutting class. Whenever you feel like surrounding yourself with fellow scholars, a walk to the VCU campus is as easy as it gets. 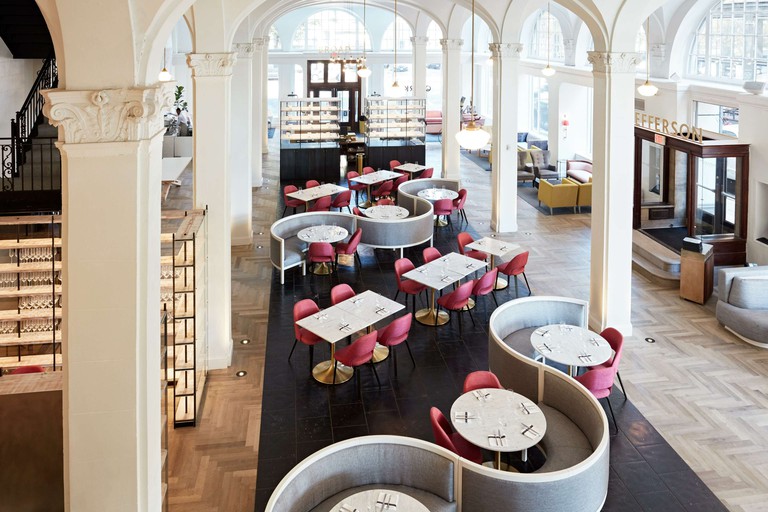 Art lovers will find a vibrant home at Quirk Hotel – it’s one of the best hotels in Richmond for those with a penchant for creativity. While the exhibition gallery is open to the public, eight rooms feature exclusive murals painted by artists in residence. If you’re feeling particularly inspired, reserve a loft suite. It’s a cozy canvas with expansive windows and fresh coffee for letting your creativity flow. Trouble finding your muse? Check out the Q Rooftop Bar first.

The Jefferson Hotel, for being in good company 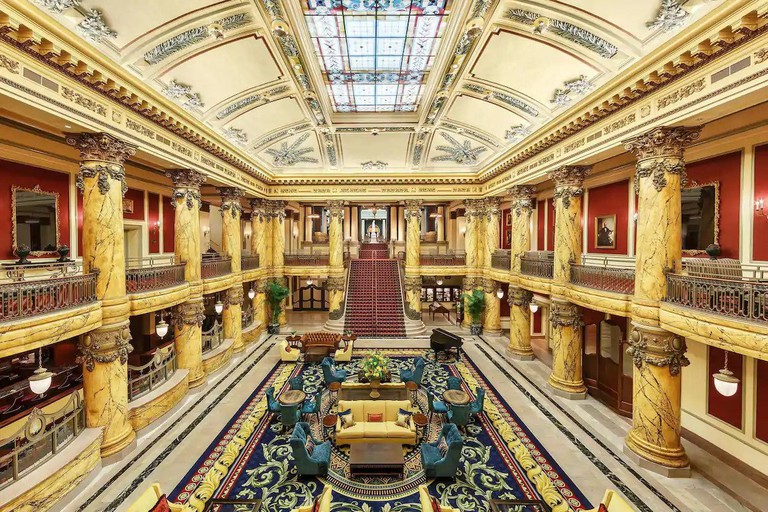 Courtesy of The Jefferson Hotel / Expedia
A charter member of the Historic Hotels of America, the Jefferson Hotel, dating to 1895, is a landmark in Richmond. The building’s facade features several architectural styles, including Spanish Revival, Italianate, Palladian and Classical Revival. The grand staircase is perhaps the most stunning feature, although there is a life-size marble statue of Thomas Jefferson sculpted by Richmond native Edward V Valentine in the lobby. Famous former guests have included 12 US presidents, Charlie Chaplin, Frank Sinatra and Cindy Crawford.

The Westin Richmond, for boosting your heart rate 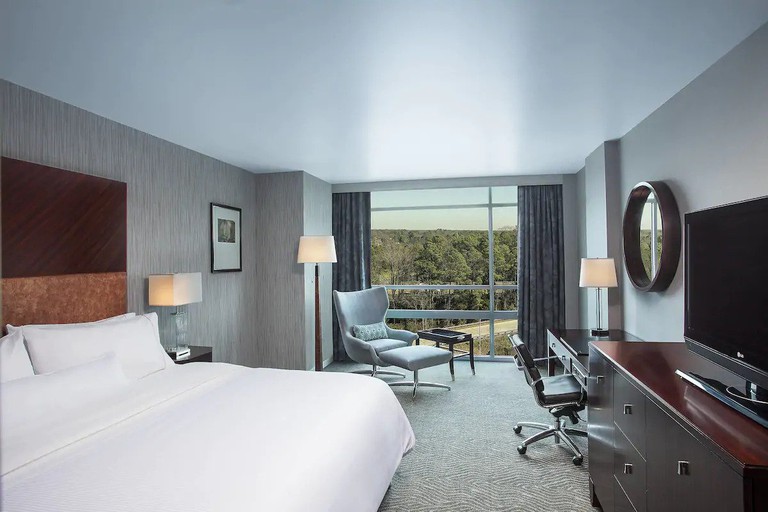 Courtesy of The Westin Richmond / Expedia
The Westin Richmond is your best bet for a modern, comfortable hotel just outside the city center. Workout fanatics will be happy to find a spacious workout center equipped with plenty of machines and weights. Meanwhile, the trail next to the hotel is perfect for runners or those taking an afternoon stroll. And for those with pets, the Westin is dog-friendly, so you can bring your furry friend along for the trip. 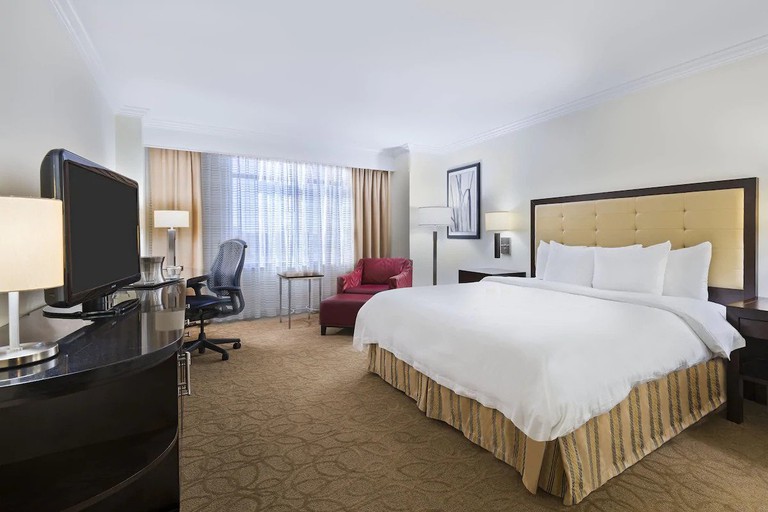 Courtesy of Hilton Richmond Hotel and Spa/Short Pump / Expedia
The Hilton Richmond Hotel and Spa provides many amenities, making it one of the most convenient places to stay in Richmond. Take advantage of the Aura Spa and Salon, offering everything from massages and facials to hair cuts. Shula’s Steakhouse in the lobby is a tribute to former National Football League (NFL) coach Don Shula. Here you can enjoy one of the prime-cut steaks or take in a game at the bar. If you need a morning pick-me-up, the on-site Aroma Cafe has coffee and fresh snacks for breakfast. 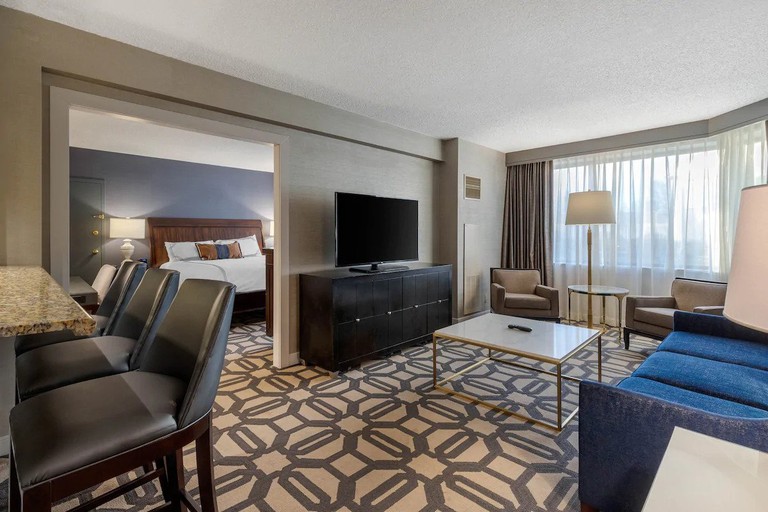 Courtesy of Omni Richmond Hotel / Expedia
The Omni Richmond Hotel is in the Shockoe Slip district, where historical architecture and cobblestone streets reflect the past. The hotel overlooks the scenic James River and is just blocks away from the Virginia State Capitol building. Many of the top restaurants, bars and clubs in Richmond are within walking distance, too. You’d be hard-pressed to find a better location to experience all that the city has to offer. 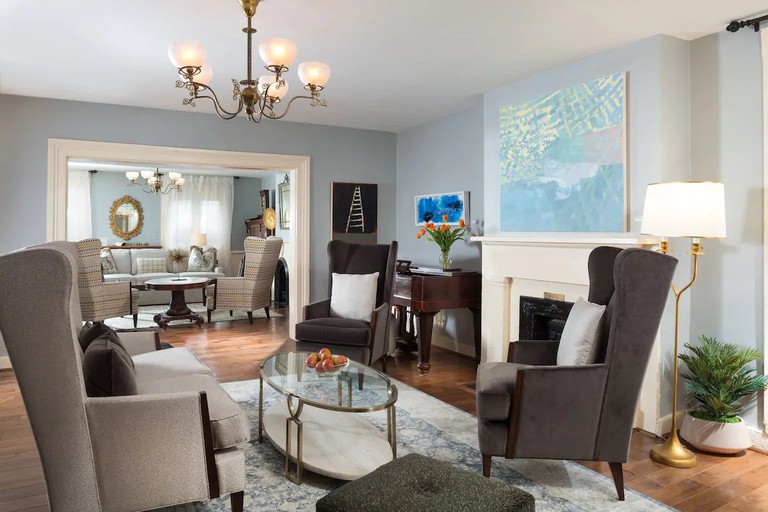 Courtesy of Linden Row Inn / Expedia
Looking for a quaint place to stay during your trip to Richmond? Then look no further than the Linden Row Inn, a 70-room hotel that promises to offer the true Richmond experience. It comprises seven connected row houses built in the mid-1800s – all have been expertly renovated over the years. Guest rooms and suites are furnished with 19th-century antiques, while the main attraction is the romantic garden courtyard, where Edgar Allan Poe spent time playing as a child.

The Commonwealth, for spacious suites 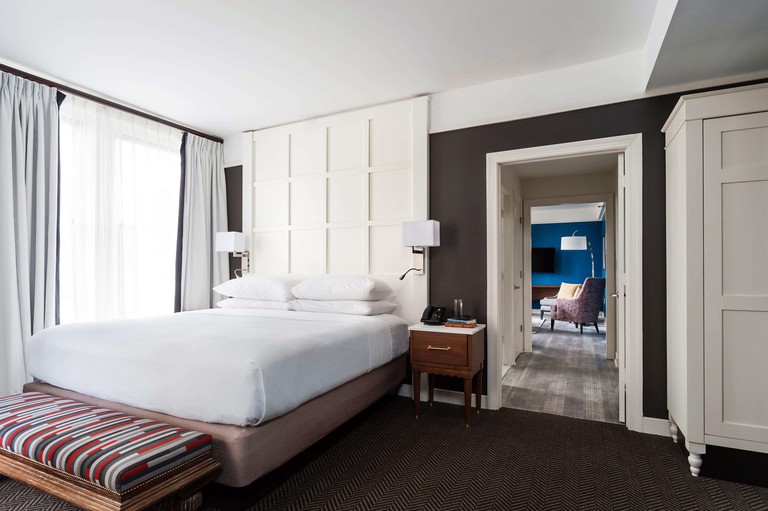 Courtesy of The Commonwealth / Expedia
Across from the Virginia State Capitol and Governor’s Mansion is the Commonwealth. This building has quite a history, dating back to 1846 when it served as a bootlegging saloon named after its founder, Louis Rueger. During the Civil War, the hotel burnt to the ground; it was rebuilt in 1912. The property was bought and renovated in 1982 while retaining its historical appeal. Each suite is spacious and includes a bedroom, a living room and a bathroom.

The Berkeley Hotel, for a refined retreat 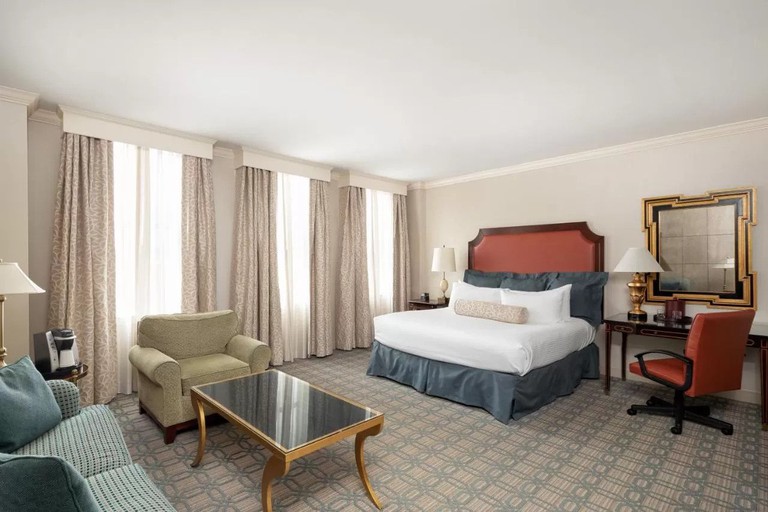 Courtesy of The Berkeley Hotel / Expedia
The Berkeley Hotel has been providing its guests with an upscale, boutique experience in downtown Richmond since 1988. The Dining Room restaurant is one highlight – check it out if you’re in the mood for some Southern eats and comfort food such as fried green tomatoes, lump crab cakes, and pumpkin cheesecake. What’s more, the hotel is carefully designed and modeled with a European style in mind.