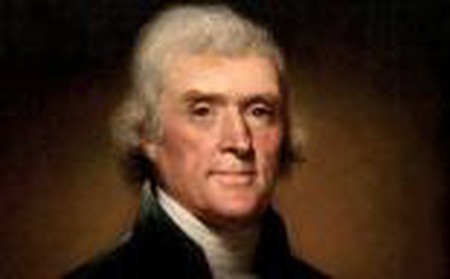 Monticello, or ‘Little Mountain’, is a beautiful European-style mansion and museum in Charlottesville, Virginia, which used to belong to Thomas Jefferson. Inspired the tenets of European art and architecture, it was designed by Jefferson himself – a fine architect – in the style of French and Italian buildings of the 18th century. But Monticello is also home to a much more dramatic and abominable story – that of the 600 slaves who lived there. 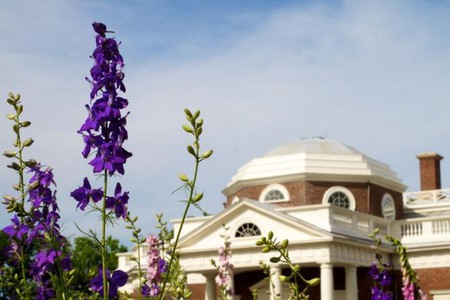 Many of the founding fathers were polymaths, men with extensive knowledge on different subjects, and Thomas Jefferson was no exception. He was a well-versed scholar, a brilliant inventor, businessman and writer but also a very talented architect. Although his major legacy remains the Declaration of Independence, Thomas Jefferson has influenced modern American society in many ways. It is still possible to admire his talent as an architect by visiting some of the buildings he designed, among which the most iconic is Monticello. This beautiful site is part of America’s historical and architectural heritage, its image appearing on postage stamps, coins and bills, most noticeably on the nickels minted since 1938.

Monticello is the home where Thomas Jefferson lived for most of his life but it took him nearly 40 years of designing and re-designing to achieve his ideal of architectural perfection. While serving as a Minister of the United States in France, Jefferson was able to travel around Europe and see with his own eyes the masterpieces of classical and neo-classical architecture which he had only known from textbooks. The Pantheon and the Temple of Vesta in Rome, Andrea Palladio’s Villa Rotunda in Vicenza, the Parthenon in Athens and the Hotel Salm in Paris were only some of the buildings that piqued his interest and that inspired Monticello’s architectural style. It was while living in Paris that he became familiar with the ‘modern’ trends of architecture and decided to remodel his own home. Monticello had been built in 1768 but the numerous works of remodelling which continued throughout most of his presidency delayed its completion until 1809. 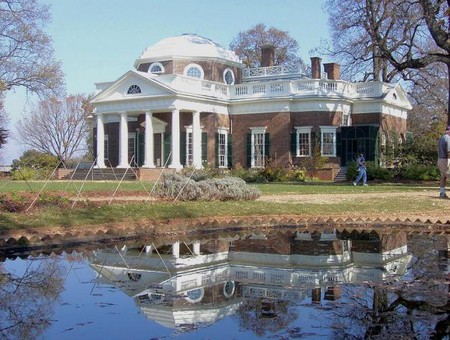 Monticello is a visually striking building on the summit of a 260-metre-high peak located just outside Charlottesville in the state of Virginia. The structure has 43 rooms, 33 of which are part of the house itself while the rest are divided among the pavilion and the South Terrace. The rooms still feature some of the original furniture and have been restored to their Jefferson-era state by the homonymous foundation. For example, the dining room’s walls have been brought back to their original ‘chrome yellow’ after various transformations throughout the years. Another noticeable feature of this estate is its stunningly beautiful grounds and gardens, which include a flower garden and adjacent botanic laboratory, a vegetable garden where Jefferson grew more that 300 varieties of vegetables, and fruit gardens which provided the estate with over 170 varieties of peaches, grapes and apples.

After Jefferson’s death in 1826 the house was inherited by his daughter Martha Jefferson Randolph, who subsequently sold it to Uriah Levi. Levi was a US naval officer who had a profound respect for Jefferson and who spent a considerable amount of money to preserve the estate. Monticello was then inherited by Levi’s nephew and then donated to the Jefferson Foundation, which restored the building to its original state and opened it to the public as a museum. 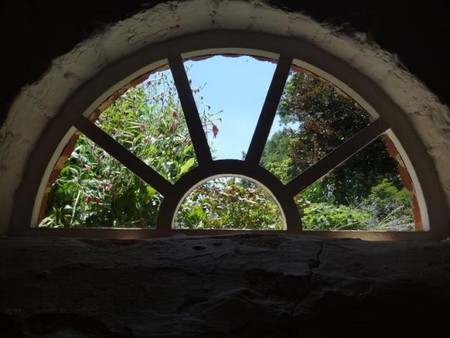 It is interesting to analyse the dichotomy that permeated Jefferson’s world because as much as he came to loathe and despise slavery, his wealth and social status were entirely dependent on it. When Thomas Jefferson was born, in 1743, the economic power of the Southern states was almost entirely built on free labour provided by slaves. As the son of a plantation owner, Jefferson witnessed first-hand the amount of work that slaves carried out on a daily basis. In the fields, the slaves that worked for the Jefferson family would take care of every single aspect of the production of tobacco, while those who worked in the house would cook, clean and take care of the Jefferson children. His education and his lifestyle were only made possible by the profits of this slave-based agricultural activity.

Throughout his life, Thomas Jefferson owned over 600 slaves and was never able to extricate himself from a problem that he himself refers to as a ‘deplorable entanglement’. Several families worked on the estate, among which the most known were the Hemings, the Gillette and the Granger. Slaves worked from sunrise to sunset, six days a week, and took care of every single aspect of daily life, even helping to build Monticello. 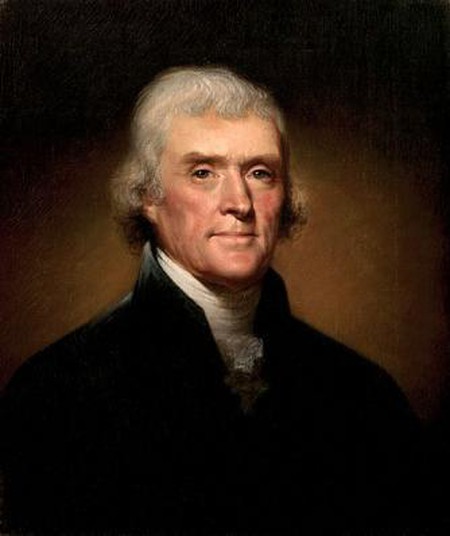 Like many of the founding fathers, Jefferson had been deeply influenced by the principles of Enlightenment. This intellectual movement, born in Europe in the early 18th century, was based on the inalienability of natural human rights such as liberty and equality. Drawing strength from these principles the founding father announced the creation of the new American nation, a nation free from British tyranny. On the 4th of July 1776, the Declaration of Independence was unanimously approved by the thirteen united States of America and it clearly stated that ‘all men are created equal, that they are endowed by their Creator with certain unalienable Rights, that among these are Life, Liberty and the pursuit of Happiness.’ Unfortunately, these empowering and inspiring words did not apply to nearly one-fifth of the American population because slaves, men, women and children, did not have the right to pursue liberty and happiness.

Today it seems incredibly contradictory that men who had such intellectual brilliance and foresight, the very same men who wrote the Declaration of Independence basing it on principles of freedom and happiness were slave owners. Twelve of the first eighteen American presidents owned slaves and did so for their entire lives. Jefferson was probably one of the most outspoken and called slavery an ‘abominable crime’. Many other patriots also believed that only through the emancipation of slaves would the ideal that all men are created equal be fulfilled, but the newborn nation was still too fragile and too dependent on slavery to allow these thoughts to turn into actions. Jefferson spent most of his life dealing with this moral dilemma and drafted various documents that proposed solutions to this problem but did not live to see the abolition of slavery.