The most populous city in Virginia, Virginia Beach is renowned for its scenic coastline and long sandy beaches. While the neighbouring sea and its flavours inspire the menus of many of the city’s restaurants, there are also influences of Italy, Thailand and the Middle East. Virginia Beach’s restaurants featured in a previous Culture Trip article, and with ever-changing tastes, we’ve updated our Virginia Beach’s top 10 eats. 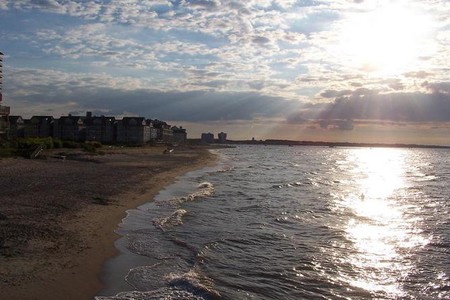 Restaurant, Seafood, $$$
Facebook
Email
Twitter
Pinterest
Copy link
Share
Map View
One of the most popular seafood restaurants in Virginia Beach is Blue Seafood and Spirits. Head chef and owner Charles Thain is no stranger to maritime cuisine and is renowned for his expertise in the field. His aim is to create a memorable dining experience, and he certainly delivers. Diners are treated to a complimentary amuse bouche delivered to them by Thain himself, adding the personal touch to the evening. Highlights from the menu include the restaurant’s signature broiled lump crab cakes, single-fried Nassawaddox creek oysters and tempura-fried shrimp. Desserts on offer include their award-winning chocolate bread pudding with crème anglaise and key lime pie. There is also an impressive selection of wines which punctuate the culinary experience at Blue. This place is truly a gem.
Open In Google Maps
#420, 2181 Upton Drive, Virginia Beach, Virginia, 23454, USA
+17576895395
Visit Website
Give us feedback

With a fantastic view of the beaches of Virginia, Doc Taylor’s has had a few reincarnations. Originally a pink motel, which then became the residence and practice of Doctor Taylor, the building’s current occupation is a homely restaurant serving traditional American cooking. The walls of the premises are decorated with memorabilia recalling the history of Virginia Beach and Doctor Taylor himself. The success of Doc Taylor’s resulted in the opening of a sister venue Tautogs, which is one of the best seafood restaurants on the Virginia Beach seafront. Head chef Ray has created breakfast and lunch menus to suit any taste and palate, with salads such as Dr. Ramon Redford’s spinach salad, made from portabellas, red onion, hard-boiled egg, bacon and gorgonzola with a poppy seed vinaigrette, burgers, and sandwiches such as the catfish po-boy, which comprises crispy fried catfish on a sub roll with lettuce, tomato & granny smith apple tartar sauce, all finished off with a famous Doc Taylor mimosa or bloody mary. There is plenty to feast on in this Virginia venue.

Bar, Restaurant, American, Pub Grub, $$$
Facebook
Email
Twitter
Pinterest
Copy link
Share
Map View
Opening its doors in 2011, FireBrew Bar and Grill is the creation of Dean and Sue Gonsior. The basis of FireBrew’s menu is their open flame Fire Deck oven, which diners can observe while it cooks their meals. The restaurant also prides itself on not having any microwaves or fryers, resulting in more flavourful food. Dips, hummus, chilli, salads, pizzas and quesadillas are just some of the food delights diners can look forward to when they step through the door. However, food is not the only thing on the menu, as FireBrew boasts an impressive speciality drinks menu, with cocktails, beer and wine to suit any mood. Furthermore, FireBrew visitors can also avail themselves of the exclusive self-service wine station, where guests are allowed to sample several wines at their own leisure. What more could a person want!
Open In Google Maps
117, 1253 Nimmo Parkway, Virginia Beach, Virginia, 23456, USA
+17576892800
Visit Website
Give us feedback

Serving the authentic taste of Puerto Rico and Cuba is the Mojito Café. A small but charming restaurant, the Mojito Café is big on flavour, with all their dishes infused with the best of Latin America. The menu features highlights such as their popular and award-winning fish tacos, their delectable ropa vieja, and their delicious pollo en chimichurri. Cocktails also make the Mojito Café what it is, not only in name, but also through the wide variety available, which are made entirely from scratch and are never pre-mixed. With limited seating, it is best to arrive early at Mojito Café to guarantee a seat and an unforgettable dining experience.

Opened in 1974 by the Crisostomides family, Pocahontas Pancake and Waffle Shop became a household name in Virginia Beach. It was taken over in 1986 by the Zervoudakis family, who made significant changes to the premises, but kept the trademark name. Murals were painted on the walls by a local artist Jim Johnson, and a Native American tee pee was built inside. In 2002, the waffle shop was featured on the Food Network’s ‘Best Of’ series, which awarded Pocahontas with the title of ‘Best Pancake House in Virginia Beach’. It is no surprise, therefore, that Pocahontas has become the go-to place for fluffy pancakes and waffles, stacked high with syrup and with a side of crispy bacon. With healthy fruit plates, traditional American breakfasts, fries, coffee and pecan waffles all on the menu, Pocahontas is the home of good American home-cooked food.

Restaurant, American, Seafood, $$$
Facebook
Email
Twitter
Pinterest
Copy link
Share
Map View
The story goes that in 1935, famous restaurateur Robert Steinhilber decided to leave his city life and move to the country, where he purchased the site of Lynnhaven Golf and Country Club on the Lynnhaven River. However, Steinhilber couldn’t stay out of the restaurant business for long, and he began constructing what is now the dining room, and in 1939, Steinhilber’s opened its doors and has since become one of Virginia Beach’s oldest and most established restaurants. Continuing in his footsteps is his daughter Jeanne and grandson Brady, who are committed to bringing good quality food in a homely atmosphere. The menu also continues Steinhilber’s legacy, with its signature fantail-fried shrimp and New York strip steak. The beautiful magnolia tree in the front lawn, which was nursed back to health by Steinhilber in the 1930s, stands as a testament to the restaurant’s dedication to serving the people of Virginia Beach.
Open In Google Maps
653 Thalia Road, North Central, Virginia Beach, Virginia, 23452, USA
+17573401156
Visit Website
Give us feedback

With panoramic views of the northern end of Virginia Beach and its boardwalk is renowned restaurant Terrapin. Creating sumptuous dishes from seasonal, sustainable farm-fresh ingredients, it is no surprise that head chef Rodney Einhorn has won awards for his contemporary American cuisine. The recently renovated restaurant offers intimate dining with a touch of elegance, with a zebra-themed wood bar and serene lanterns floating overhead, while diners can witness their meals being prepared in the open plan kitchen. There is also a choice of outdoor seating on the terrace for a more ambient setting. Expanding his culinary portfolio, Chef Einhorn opened Terrapin in 2006 and has since won numerous local, state and regional awards, including the prestigious AAA Four Diamond Award, which the restaurant has won consecutively since 2008. With a seemingly endless list of accolades, Terrapin is one restaurant not to miss in Virginia Beach.

The Virginia sister to its Baltimore venue, Thai Arroy is a relatively new edition to Virginia Beach’s oceanfront. Bringing the best of Thailand’s cuisine to the shores of the South Atlantic region, Thai Arroy has plenty to offer diners with their varied menus. All dishes are made in the authentic Thai tradition, from soups, dumplings, rolls, rice dishes, curry and many more delights. There are also vegetarian, vegan and gluten-free menus available. These are all accompanied by homemade cocktails such as O-Lieng and Chayen, and desserts like rice pudding, fried banana and mango ice cream. For a more exotic evening, Thai Arroy is the place to try.

The Route 58 Delicatessen is the brainchild of well-known radio DJ Jeff Goldberg. Working for 106.9 The Fox for 11 years, Goldberg changed his career path and opened the 58 Deli in 2004. Located on Loehmann’s Plaza, 58 Deli soon became famous in Virginia Beach for their range of sandwiches and burgers, particularly filled with hot corned beef and pastrami, with a side of half-sour pickles on rye bread. Mile high sandwiches are not all they offer, with 58 Deli’s knishes, Sabrett hot dogs and knockwurst, char-grilled burgers and meat platters are worth a try. The restaurant also serves a large range of desserts from the world famous Carnegie Deli in New York, with their cheesecake famous across the state of Virginia. Diners leaving 58 Deli will not have an empty stomach.

Restaurant, Seafood, Chinese, $$$
Facebook
Email
Twitter
Pinterest
Copy link
Share
Map View
A firm favourite on the Virginia Beach seafront since 2003, Zoës opened under new management in 2009. Its new rendition is better than ever. There are many steakhouses and seafood restaurants to choose from in the area, but an evening at Zoës is unique. Favourites from their menu include five spice-dusted shrimp tempura, which arrives in a Chinese take-away box, bacon-wrapped lobster, blue crab mac and cheese, and of course, their steaks, which are certified 100% Angus beef. There is also a chef’s tasting menu, which is complemented by the intriguing selection of wines on offer at the restaurant. Since its reincarnation, Zoës has won a number of awards, including the 2009 Hampton Roads Platinum Plates Award, and numerous Wine Spectator Awards of Excellence.
Open In Google Maps
713 19th Street, ViBe Creative District, Virginia Beach, Virginia, 23451, USA
+17574373636
Visit Website
Give us feedback
Give us feedback