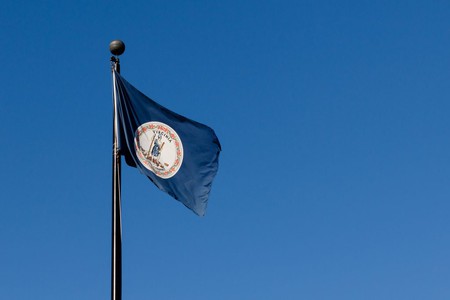 The state flags in the US have deep symbolism and history attached to them. Here is what you need to know about the flag of the Commonwealth of Virginia.

When it was adopted

The flag was adopted in 1861 when Virginia seceded from the Union. The state’s seal was placed on the flag as the emblem of the state at the start of America’s Civil War.

The state flag of Virginia is set in a deep blue with a circle of white in the center. Inside the white circle is the coat of arms either painted or embroidered. This circle and seal is on both sides of the flag. 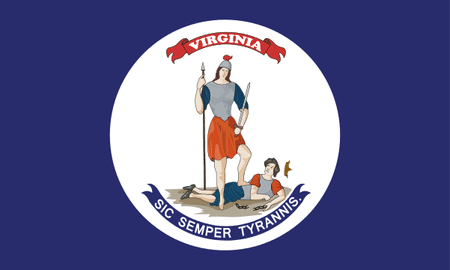 Virginia state flag that was used during the 1860s | Public Domain

The symbolism of the colors

The blue in the flag symbolizes vigilance, truth and loyalty, perseverance and justice. The white is a symbol of peace and honesty.

The state seal depicts the state’s motto. The Roman goddess Virtue/Virtus is depicted holding a sword and a spear, and the tyrant she defeated is lying on the ground holding a chain and a whip. The tyrant’s fallen crown is shown to the right. Virtue symbolizes Virginia and the tyrant symbolizes Britain. The crown symbolizes the end of Britain’s sovereignty. In the space below, the Latin motto of Virginia ‘Sic Semper Tyrannis’ meaning “Thus Always to Tyrants”) is written. Red Virginia creepers and green leaves surround the scene. 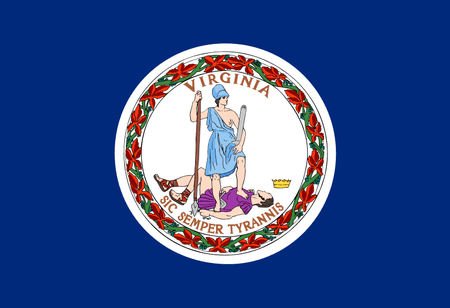 While the Flag of the Commonwealth was adopted in 1861, some minor changes were made in the first half of the 20th-century. In 1930 the white fringe was added, and in 1931 the “ornamental border” of the seal was more precisely defined as a wreath of red and green Virginia creeper. On March 16, 1949, exact colors were assigned to the various design elements.

The central seal on the flag was designed by four designers – George Mason, George Wythe, Richard Henry Lee, and Robert Carter Nicholas. George Wythe was one of the signers of the original Declaration of Independence.

The dimensions of the flag are specific. The ratio of the fly (height) to the hoist (width) is 7:11 meaning it is seven units tall for every 11 units wide. 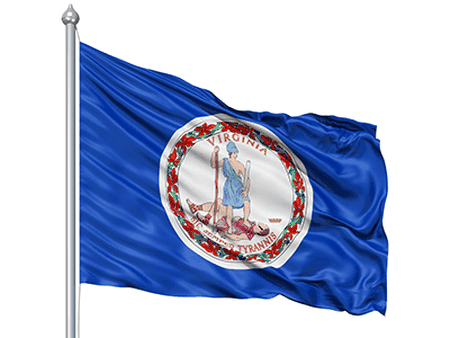 The Pledge of Allegiance to the flag states the following: “I salute the flag of Virginia, with reverence and patriotic devotion to the ‘Mother of States and statesmen,’ which it represents—the ‘Old Dominion,’ where liberty and independence were born.”

The flag may be flown every day as long as weather permits. It can be flown from sunrise to sunset, but if flown at night should be properly illuminated.

If the flag is displayed outdoors, flag code requires that it be flown from a flagpole. The flagpole should be at least two and a half times as long as the flag itself.

Salute the flag by standing at attention, facing the flag with the right hand over the heart.