The Unusual Journey of a Boat Made Famous by Roy Lichtenstein 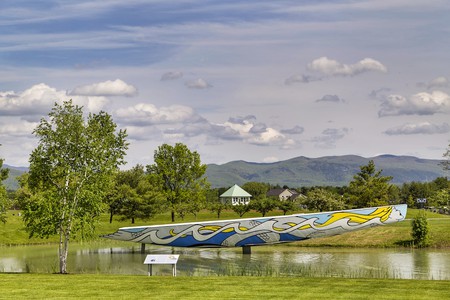 At the helm of a sailing syndicate preparing for the 1995 America’s Cup, Kevin Mahaney commissioned one of Roy Lichtenstein’s last, largest, and most unusual works of art. Ahead of the esteemed yacht race’s 35th edition in June, Mahaney revisits his alma mater to unveil a new exhibition, Young America: Roy Lichtenstein and the America’s Cup, at the Middlebury College Museum of Art.

Legendary American Pop artist Roy Lichtenstein bequeathed an impactful legacy of primary-colored paintings and sculptures akin to newspaper comic strips, which garnered attention on an international scale. His aesthetic became so iconic that in 1994, a group of hopeful sailors, led by former Olympic silver medalist Kevin Mahaney, approached Lichtenstein to embellish the boat they would race in the trials for the forthcoming America’s Cup—a prestigious yachting competition of English origins that dates back to 1851. 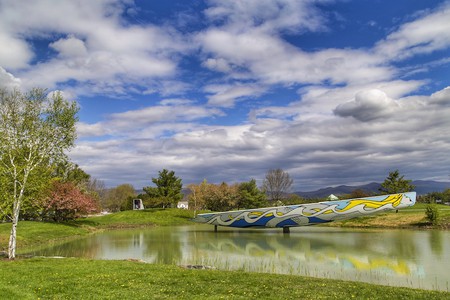 Drawing inspiration from traditional vessel figureheads, which historically bore depictions of deities and mythical creatures for good luck on the high seas, Lichtenstein rendered a sleek mermaid across the boat’s hull, complemented by a spinnaker painted with bold rays of sunlight. Rhode Island School of Design students subsequently executed the artist’s plans for the boat called Young America, which indeed premiered at the sporting event’s trials in 1995, though it ultimately wouldn’t qualify for the race itself. 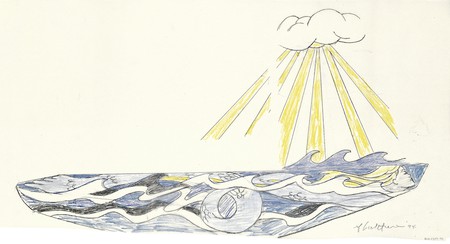 Over two decades years later, Mahaney presents Young America within its maritime context alongside a comprehensive exhibition at the Middlebury College Museum of Art. Young America: Lichtenstein and the America’s Cup features the 70-foot hull as designed by the Pop artist (on loan from Storm King Art Center in New York), original sketches for the project, and miniature models of the boat and sail. The exhibition also showcases a curated selection of collateral paintings, photographs and prints adhering to the nautical theme, as well as a documentary film by the award-winning Theodore Bogosian following the events of this historic commission. 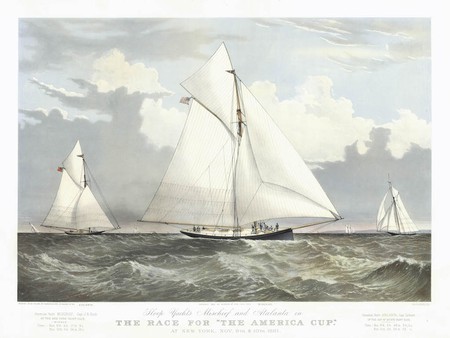 Currier & Ives, ‘Sloop Yachts MISCHIEF and ATLANTA In The Race For “The America Cup.”‘ | © Middlebury College Museum of Art

“Me and the boat, we have a long history together,” Mahaney said at the intimate press unveiling of Young America: Lichtenstein and the America’s Cup on May 23 in Vermont. Their reunion was poignant, as Mahaney couldn’t experience Young America‘s full splendor until organizing this exhibition. “I never got a chance to look at the boat,” he recalled. “I’d walk up to it and it was against the dock, and then I’d get on it. I never had a chance to appreciate the boat as much as I have over the last couple of years, so walking out and seeing it with the reflection [in the pond]—it’s stunning.”

As it stands, Young America serves as a work of public art on the Middlebury campus, stationed just above a scenic pond outside of the college’s museum for students to appreciate. The sketches and models are exhibited inside the museum, which is consequently part of the Mahaney Center for the Arts. 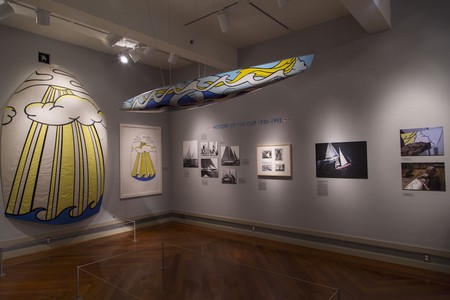 A burning unanimous question was how Mahaney pulled off what would have been a multi-million-dollar commission. But as it turned out, Lichtenstein donated his creation as an act of good will given Middlebury’s impressive education outreach program. “Roy taking on this commission was courageous,” Mahaney said. “It wasn’t going to be hidden somewhere—it was on TV around the world every day.” But as a boating professional, the ex-Olympian also expressed humble awe at Lichtenstein’s deep understanding of the water, and the precision with which he anticipated the boat’s movements on the waves. 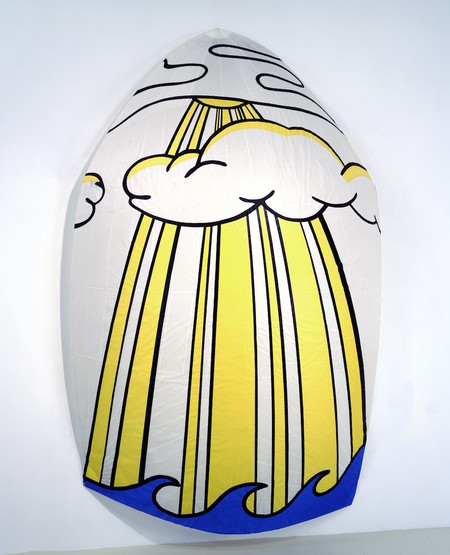 Young America: Roy Lichtenstein and the America’s Cup is one of the rare exhibitions to unite all elements of an artist’s project from start to finish—that is minus the hull’s original sail, which has gone missing since it was raised for the America’s Cup opening ceremony. Mahaney is offering a $25,000 reward for the sail should it ever be found. But unlike the boat’s previously isolated presentation, Middlebury places Young America in context to reveal the entirety of its unlikely yet fascinating story.