Explore the surreal great outdoors of Utah, and witness millions of years of natural beauty in the making amidst rugged red rock formations, ethereal arches, water-carved sinews and precipitous wind-whittled cliffs, spires and hoodoos. With unique histories (from pioneers to Hollywood films) and geological formations, this state is the perfect getaway for nature lovers, outdoor enthusiasts and geological aficionados. 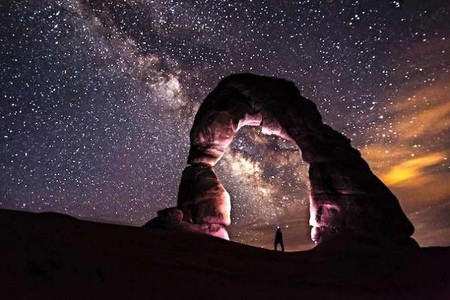 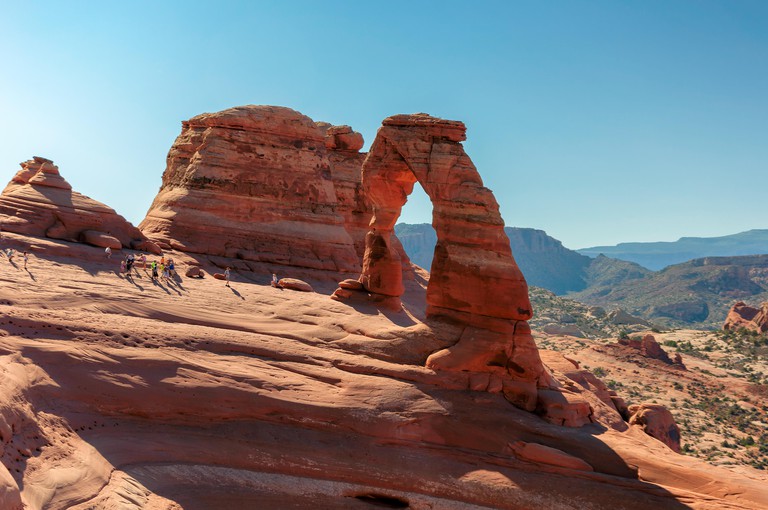 © lucky-photographer / Alamy Stock Photo
In addition to including the largest proliferation of arches in the world (over 2,000 of them), Arches National Park is home to one of Utah’s most iconic landmarks: the ‘Delicate Arch‘. With dozens of scenic overlooks and trail-heads, a 40-mile scenic drive awaits, climbing up into a beautiful plateau with glimpses of far-off snowcap mountains.

Feel free to cater your trip to skill level or time frame: from hiking the longer routes such as ‘Double O Arch’ or ‘Tower Arch’, to going for an easier route such as the ‘Park Avenue Trail’ or anything in the ‘Window Section’. After hiking the maze of snaking trails through the scenic park or reserving a guided tour of the ‘Fiery Furnace’, stay in one of the parks nearby campgrounds (such as ‘Devil’s Garden Campground’) or visit the nearby town of Moab, rich with mountain biking trails if you’re looking for more adventure. Whether hiking, biking, backpacking, camping, canyonering, rock-climbing or photographing, come to bask in the unbelievable beauty created by nothing more than time and the movements of this great Earth.
Open In Google Maps
Utah, USA
+14357192299
Visit Website
Give us feedback

Also known as ‘Hoodoo Country‘, Bryce Canyon National Park contains a series of rose-colored cliffs, red-rock hoodoos and spectacular natural amphitheaters. Offering a 38-mile scenic drive loop, a variety of hiking trails and horse or mule trips, Bryce’s otherworldly formations and mystical hoodoos are something you won’t forget. In addition to ranger programs (which include geological history, full moon hikes, snowshoeing, kids interest, and more) there are also astronomy programs and plenty of backcountry to explore if you can tear yourself away from the wonderfully vibrant colors of the mystical vistas and incredibly hued rock formations.

Deemed ‘The Land of the Sleeping Rainbow‘ by the indigenous Navajo, Capitol Reef National Park showcases an incredible blend of surreal landscapes embroidered with red Entrada and white Navajo sandstone adorning the surreal warped portion of Earth’s crust. Rainbow-hued sandstone ‘reefs’ and canyons, as well as rock art petroglyphs that illustrate the history of the land, proliferate along with rainbow. The land claims the past of the Fremont Culture (early indigenous people) as well as large fruit orchards to pioneer settlements, all showcased in the old Fruita Schoolhouse and Historic Gifford Homestead dwellings available for those with an interest in 19th-century Utah pioneer life. Stroll through the historic orchards, hike the surreal yet natural Hickman Bridge (or the more challenging Cohab Canyon), or enjoy the programs (astronomy, fishing, bicycling, educational games and more) in this effervescent natural wonderland.

Translated to ‘The Promise Land’, Zion – whether you’re religious or not – means some of the most amazing hikes of your life and indescribable water-carved landscapes, whittled by the Virgin River. Laden with the typical rock towers, sandstone canyons and precipitous cliffs, Zion attracts around 3.5 million visitors a year, in large part due to its infamous sport allure. Canyoneers can expect route finding, repelling, swimming and hiking for every different level. A couple of hours out of Salt Lake City (check out good pizza and brewpubs here), Zion has three campgrounds, and offers a range of activities from birding to horse-back riding. A shuttle also operates in the park, which takes passengers into the town of Springdale at the park entrance on ‘the town loop’.

Hikes include ‘The Emerald Pools’, an easy family friendly three-mile hike, all the way to more difficult trails like ‘The Narrows’ or ‘The Subway’, which actually requires a permit. The quintessential five-mile ‘Angle’s Landing’ hike is said to posses some of the most amazing views in the world, and necessitates the crossing of a precariously narrow land bridge whose chains keep hikers from a dizzying shear-face drop off on either side. 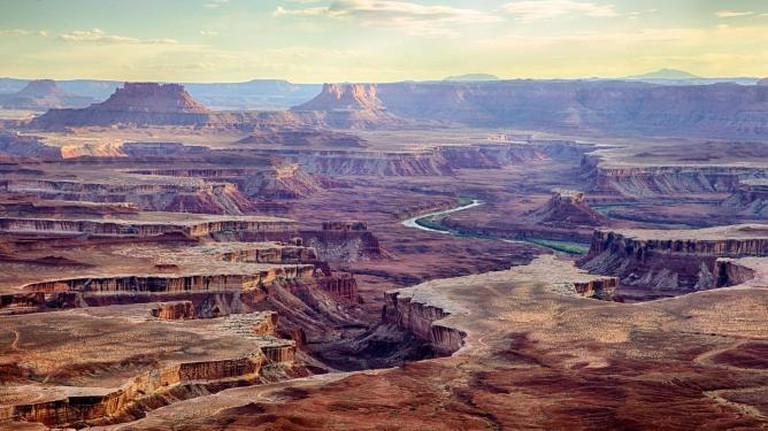 Green River Overlook, Canyonlands National Park, Utah | © Chao Yen/Flickr
Located in the south-east corner of Utah, Monument Valley Navajo Tribal Park sits in the heart of the Navajo Nation and stands as an icon of the American West. Often featured in Hollywood’s plethora of John Ford’s Westerns (including Stagecoach and the Searchers), the rugged and dramatic red landscape has become synonymous with the Old West. Monument Valley brims with culture, boasting the Goudling Film and Cultural History Museum in Goulding’s Lodge, The Dinosaur Museum in Blanding, Newspaper Rock National Historic Site, and the Bluff Fort Historic Site (displaying the legacy of trail-blazing settlers). Guided jeep tours also offer an alternative to hikes, in order to get up close and personal with Monument Valleys’ rugged and dramatic red giants. Wake up early to catch the sinuous shadows of the Natural Bridges National Monument (Utah’s first national monument), which houses three flowing-water-sculpted bridges, including ‘Sipapu’, the second-largest natural bridge in the world.
Open In Google Maps
Oljato–Monument Valley, San Juan County, Utah, USA
Give us feedback 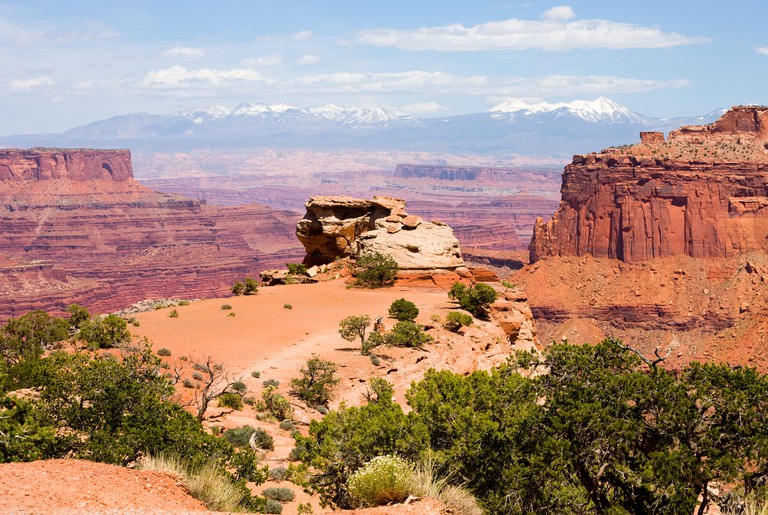 © Andrew Zarivny / Alamy Stock Photo
Deep canyons mirror the undulating waves of Utha’s Green and Colorado rivers, as the dips and curves separate to reveal towering mesas, pinnacles, spires and cliffs over a span of seemingly endless chalky, scarlet rock. This awe-inspiring park contains three distinct districts, making it the largest national park in Utah. Canyonlands encloses alluring natural solitude and millions of years of natural formations in its profuse red rock spires and sandstone fines of the Needles District, the jumble of stone and rock in its Maze district, and its views of curvaceous river banks from the Island in the Sky region.

The ‘Dead Horse Mesa Scenic Byway’to the ‘Dead Horse Point State Park’come acclaimed as must-sees, as they promise towering 2,000 foot views from above the winding Colorado River. Backpackers can hike the steep and strenuous White Rim, after spending the night in ‘White Rim’s’ campsite or the backcountry. For an easier route, traverse Grand View Point’s two mile loop to see lofty panoramas of the rivers. Or those more view-from-the-car inclined, can drive the 20 miles of paved roads, interlaced with striking views.
Open In Google Maps
Utah, USA
+14357192313
Visit Website
Give us feedback
Give us feedback