The Best Themed Hotels to Book in Utah 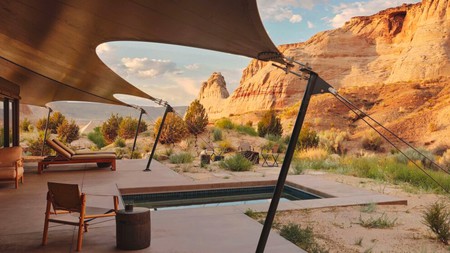 Amangiri's setting is hard to beat when it comes to atmosphere | Courtesy of Amangiri / hotels.com

Themed hotels are having a moment. Thanks in part to social media, kitschy, fun and even high-end hotels modeled around a particular era or theme have started to make a resurgence. Whether you’re wanting to feel like you’re cozying up at an alpine Swiss resort, following in the footsteps of Hollywood stars or living in the wild west, these theme hotels in Utah make a visit to this adventure-packed state even more fun – and they’re all bookable with Culture Trip. 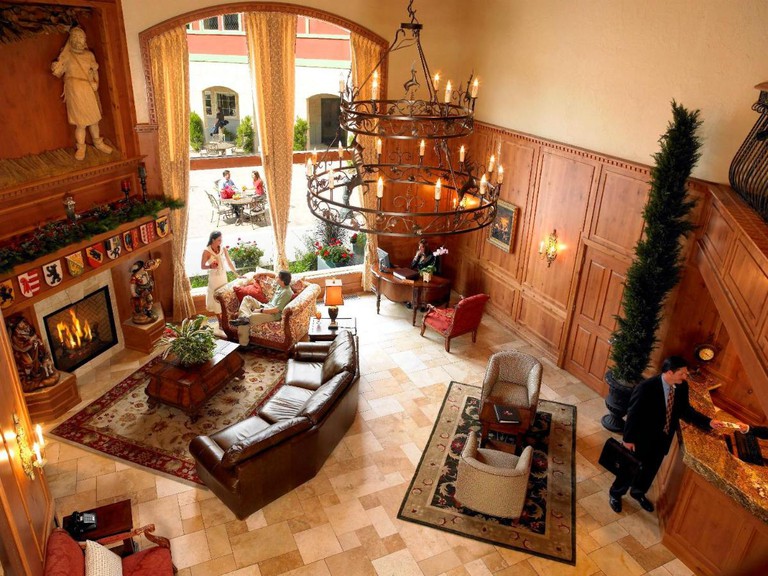 Courtesy of Zermatt Utah Resort and Spa Trademark Collection by Wyndham / Booking.com
Located between the ski towns of Park City and Sundance, you’ll feel like you’re nestled in the Swiss Alps rather than Utah at the Zermatt. The luxurious, four-star resort is housed in a stunning building inspired by Swiss architecture and offers cozy resort rooms, suites and villas for larger groups. Book a treatment at the world-class spa and be sure to make dinner reservations at Z’s Steak & Chop Haus, a European-inspired steakhouse. 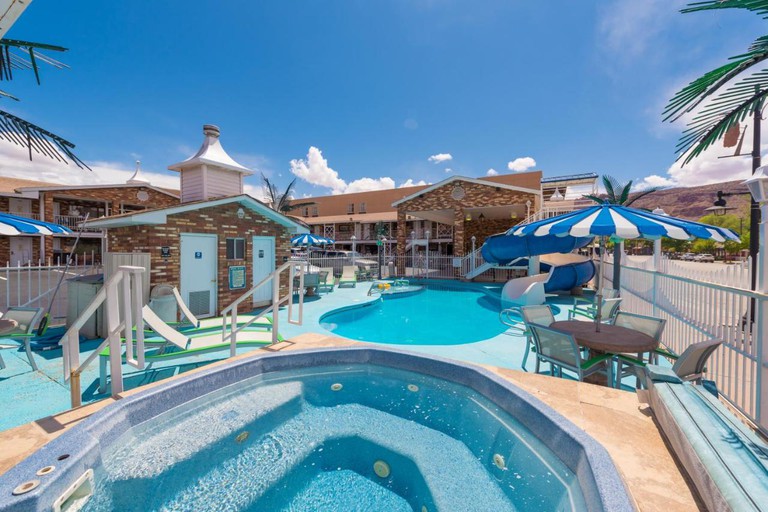 Courtesy of Expedition Lodge / Booking.com
Evoke adventure at the retro Expedition Lodge. The 36-room motel in Moab inspires guests to embark on their own expeditions, using the restored motel as a home base. Retro touches like vinyl records on the wall and mint green ‘60s-style fridges can be found throughout the motel. The rooms range from one queen bed to larger rooms with three queen beds or two sets of queen bunk beds. The rooms also include plenty of space to stash your bikes or adventure gear. 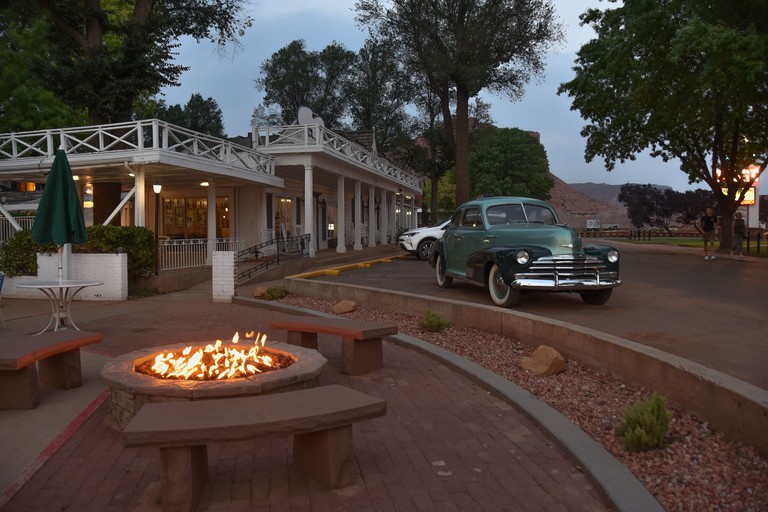 Courtesy of Parry Lodge / Expedia
Kanab, Utah’s moniker of Little Hollywood dates back to 1922 when Chauncey Parry promoted the scenic southern Utah location as an ideal backdrop for films. He would always include the Parry Lodge, which he said was able to provide accommodations to movie stars as well as catering, transportation, animals and local residents for extras. Now, you can book a room where celebs like John Wayne and Frank Sinatra have stayed. Be sure to also see a free show at the lodge’s nearly 100-year-old Old Barn Theater. 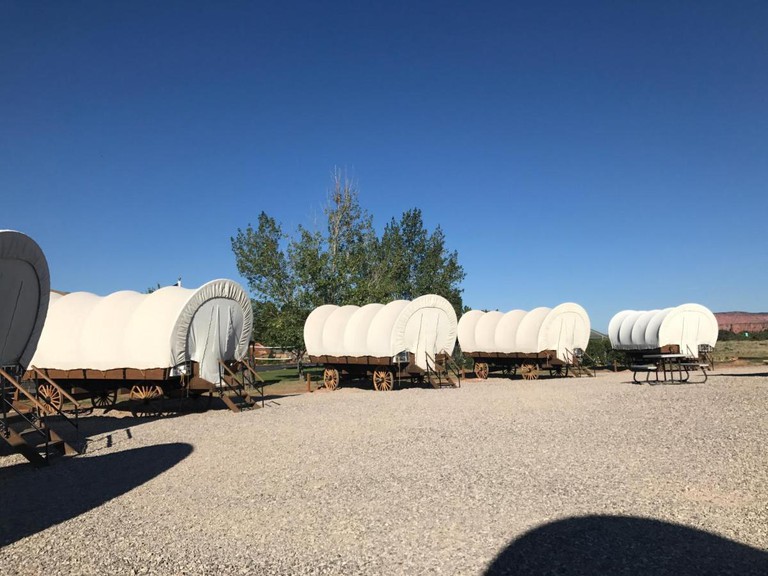 Courtesy of Broken Spur Inn and Steakhouse / Booking.com
Saddle up and book a room at the Western-themed Broken Spur Inn & Steakhouse. Standard rooms at the Torrey, Utah hotel include Western decor like quilts, wooden headboards and horseshoe lamps. But the main draw is the hotel’s Conestoga Wagon rooms, where you can stay in a pioneer-style wagon. The wagons fit up to five people and each one has its own private bathroom just a few feet away. For dinner, enjoy a large selection of aged steaks at the inn’s steakhouse. 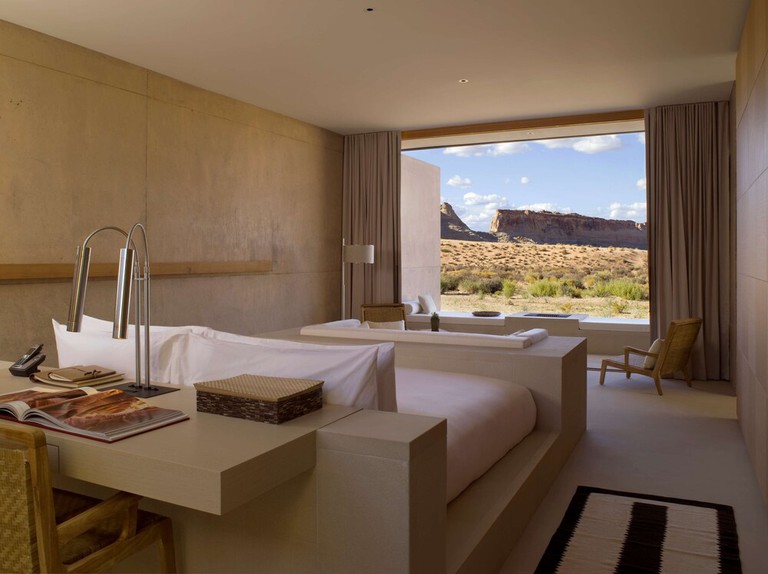 Courtesy of Amangiri / hotels.com
At the luxurious Amangiri resort, you’ll feel like you’ve stepped into a modern desert dreamland. Everything about the five-star resort is exceptionally Instagrammable. Made with natural materials, the accommodations at Amangiri seem to blend into the landscape. Suites frame dessert views with indoor-outdoor living spaces, and many offer private plunge or lap pools. Wellness is at the forefront of Amangiri, so be sure to partake in a spa day, guided meditation or yoga on the rocks.
Give us feedback