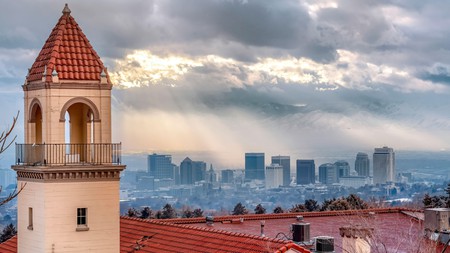 As the capital of the Beehive State and its most populous city, Salt Lake City, Utah, has a big reputation. With the monumental backdrop of the Wasatch Mountains, ample access to year-round outdoor recreation, and robust offerings for urbanites, it lives up to expectations – and more. Make your trip memorable with a stay at one of these five-star hotels in Salt Lake City, all bookable via Culture Trip. 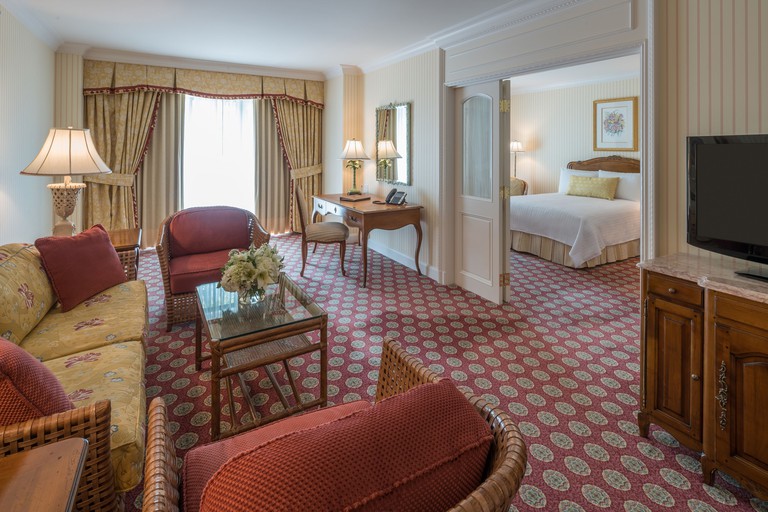 Courtesy of The Grand America Hotel / Expedia
Although it looks strikingly similar to the palatial facade seen in Wes Anderson’s Grand Budapest Hotel, you’ll find no wacky antics at this luxury hotel in Salt Lake City, blessed with one of the area’s finest spas. The only drama is of the architectural variety: rooms feature touches reminiscent of old European opulence, with cherry wood Richelieu furnishings, English wool carpets, Italian marble bathrooms, and French doors separating living areas from the bedroom. In-room dining means devouring stacks of waffles, blueberries and cream without so much as stepping outside. 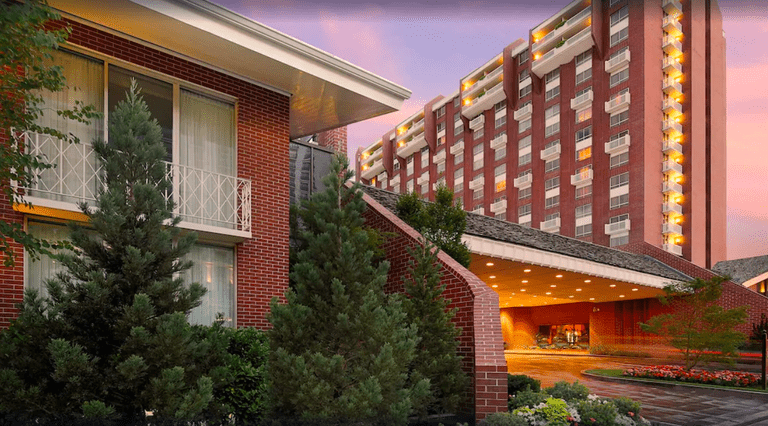 Courtesy of Little America Hotel / Expedia
Don’t let its moniker fool you: Little America is a big deal. Name it, and the concierge can make it happen, from snagging tickets to the hottest concert in town to organizing horseback riding and skiing. You’ll love the hearty waffles and roast turkey they dish up in the restaurant. Cocoon in rooms with views of downtown Salt Lake or the surrounding Wasatch Mountains – all are cozy in the traditional sense of thick carpets, velvet chairs and gilt-framed watercolors. 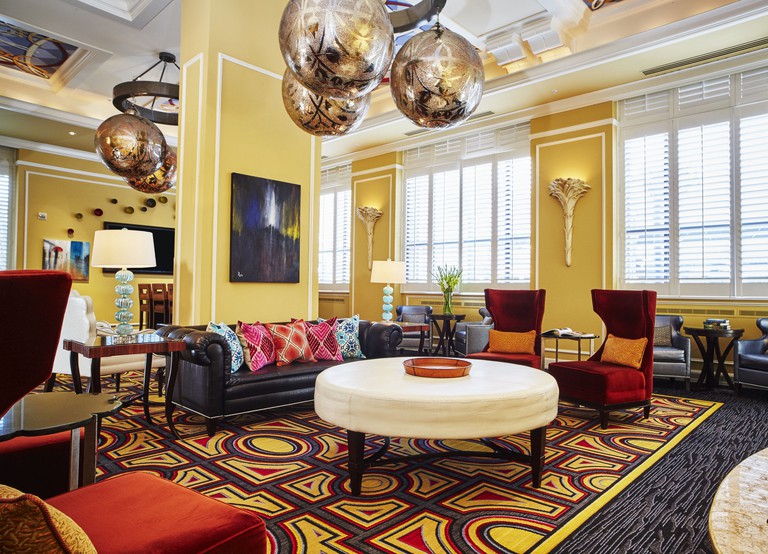 Courtesy of Kimpton Hotel Monaco Salt Lake City / Expedia
The Kimpton Monaco brand is famed for bold and unabashedly eclectic interiors, and its Salt Lake City outpost is no exception. Rich, jewel-like tones set the stage for a cinematic stay that feels like a blend of The Great Gatsby, The Tudors and Cleopatra. Think crimson and cobalt velvet chairs, bold-patterned pillows and rugs, and gold hardware, complemented by quirky horse-head lamps. Dine well on New American fare such as roast bone marrow with panko in the grand lobby with arched windows. 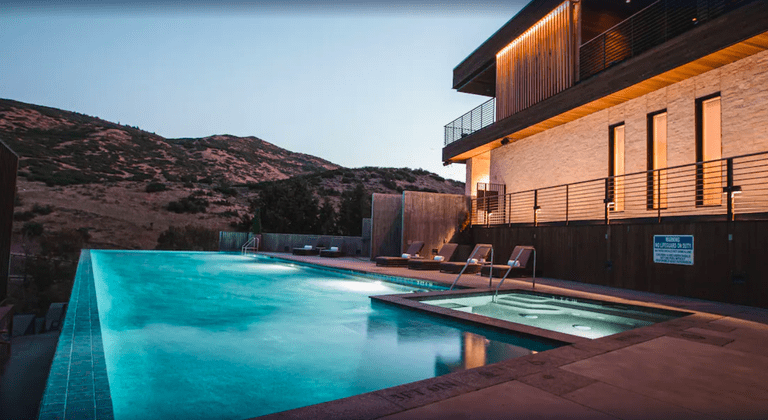 Courtesy of The Lodge at Blue Sky / Expedia
Just 35 minutes from Salt Lake City airport via the direct Blue Sky transfer this 3,500-acre (1,400ha) ranch organizes, you’ll soon be soaking up the alpine air in the lap of luxury. Reconnect with nature while snowshoeing through forested trails and heli-skiing, or enjoy a close-up view of the Wasatch Range from the warmth of the limestone Sky Lodge, Earth Suites or Creek Houses. Floor-to-ceiling windows frame big-sky views best seen from the infinity pool or the terrace as you dine on fire-grilled Wasatch beef. 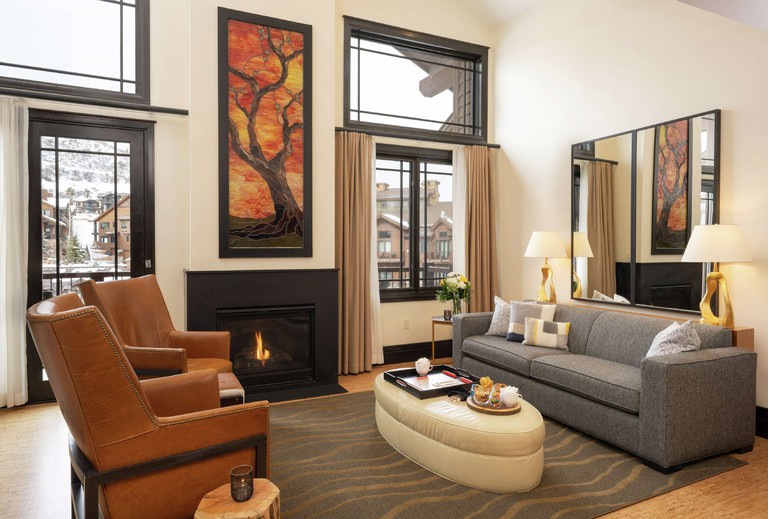 Courtesy of Waldorf Astoria Park City / Expedia
If you’re looking for that classic luxury lodge, you could do worse than this fancy option at the base of Canyons ski area. Everyone will love the woodsy cabin vibes combined with shiny chandeliers, ornate furnishings, leather headboards, gas fireplaces and antler artwork in large rooms. Breakfast on steel-cut oatmeal and berries before disappearing into the luxe spa for a day of pilates and a sculpting facial. Don’t relax so much that you forget to ask the hotel to sort your transfers to Salt Lake City airport, a 35-minute drive away. 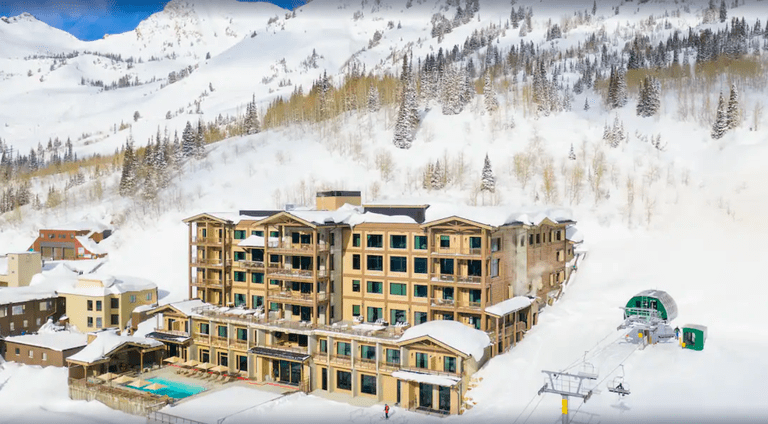 Courtesy of Snowpine Lodge / Expedia
Set in Little Cottonwood Canyon by Alta ski area, this is a retreat from everyday life. Icy silver curtains and throws accent natural wood furnishings in rooms that look out to snow-covered pines, making you wonder if you’re in remote Scandinavia or, indeed, a 40-minute drive from Salt Lake City airport. We recommend you try the High Altitude Recovery massage at Stillwell Spa, or at least a 20-minute inhalation therapy before a craft beer in the pub.
Give us feedback