The Beauty Of Monument Valley Captured On Film 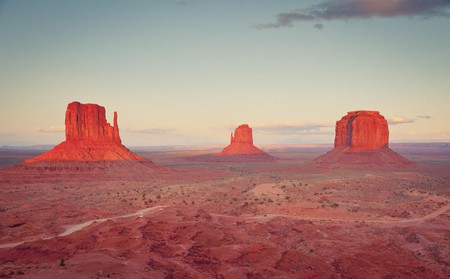 Director John Ford’s harnessing of Monument Valley in his Westerns defined the area as one of the most iconic landmarks in American cinema.

Fifty-two years have elapsed since the release of Cheyenne Autumn, John Ford’s last Western and the seventh in which he shot scenes among the red limestone buttes and mesas of Monument Valley, situated on the border of southeastern Utah and northeastern Arizona.

Ford’s work on the film concluded his 25-year occupation of this majestic five-square-mile tract of Navajo land, which began when he filmed the black and white Stagecoach (1939) there. His other Monument Valley Westerns were My Darling Clementine (1946); Fort Apache (1948); She Wore a Yellow Ribbon (1949), which was the first shot in color, magnificently by Winton C. Hoch; The Searchers (1956), his masterpiece; and Sergeant Rutledge (1960). 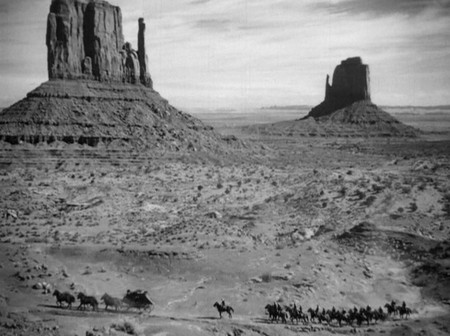 Ford also made expressive use of desert locations in Three Godfathers (1948), which he filmed in California’s Death Valley, and Wagon Master (1950) and Rio Grande (1950), both shot in Moab, Utah. Yet the terrain in those films is much less imposing than Monument Valley’s. The area is famous for its triangle of buttes: Merrick, East Mitten, and West Mitten, the latter pair so called because they look like immense mittens with erect thumbs facing inwards when viewed from the south.

Much of the drama in the Westerns filmed in Monument Valley comes from the contrast between the flat valley floor –
as crossed by a stagecoach, a cavalry troop or lone rider, or Indians moving camp amid dust clouds – and their monolithic outcrops. The implacable might of these geological titans, mostly formed over 247 million years ago during the Early Triassic period, can render the strivings of men and women futile. 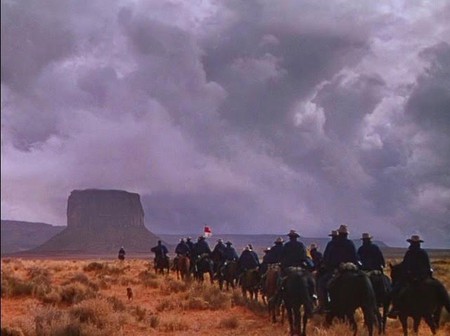 J.A. Place, the author of The Western Films of John Ford, has likened the director’s use of Monument Valley to Homer’s use of the sea. “It is rather like the sea in its changes, its colors, its moods. Like the sea and unlike lush plains or green mountains, it is resistant to human efforts to shape it, to make it serve them.”

Yet human endeavors are not futile, but often awe-inspiring in their own right. Sailors battle the sea. Ford’s Westerners, admirably motivated or not, struggle through a lunar landscape. Stagecoach‘s stagecoach races away from the East Mitten and Merrick Butte. Ethan Edwards (John Wayne) rides from the same direction as he returns to his brother’s ranch at the start of The Searchers. Captain Brittles (Wayne) drives his cavalry patrol across the valley as lightning forks the sky in She Wore a Yellow Ribbon, and he tends his wife’s grave under the lee of one of the mittens at sunset. Monument Valley, in Ford’s world, is a monument to more than just rock. 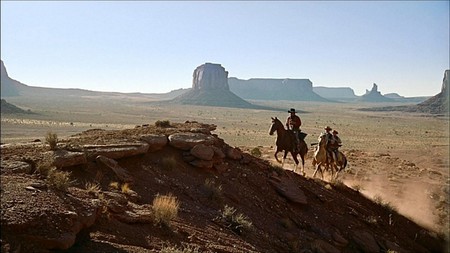 John Wayne in ‘The Searchers’ | © Warner Bros.
Give us feedback