The Best Craft Breweries In Utah 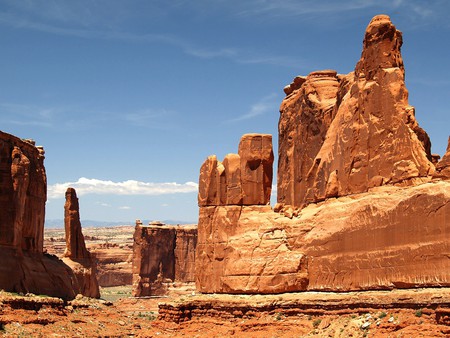 Utah has long been known for strict and strange alcohol laws. But recent years have seen a change in regulations, and the local beer scene has responded with tenacity. Long-established breweries are growing stronger, and smaller brew-houses are popping up all over the state. With expert brewers and a love for the craft, microbreweries are buzzing, and beer culture is thriving in the Beehive State, here’s some of our favorites.

Operating now for nearly 30 years, Wasatch Brewery has made history and paved the way for the Utah craft beer scene. The Park City brewpub was the first in the state, and owners were instrumental in changing state laws to allow such an establishment to exist. Now, Wasatch is enjoying wide popularity with its attitude-filled brews that are inspired by local culture. Cleverly playing on Utah’s history of polygamy in the 19th century, Wasatch created the Polygamy Porter: a dark, brown porter. Poking fun of a county that is notorious for its straight-laced values, the Provo Girl is light, crisp German pilsner that is sure to be the life of the party. 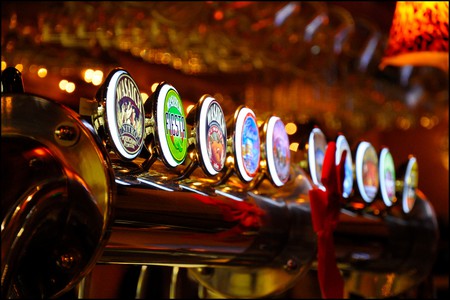 Red Rock Brewing Company started in 1994 in Salt Lake City, and has successfully made a name for itself in both the local and national craft beer scene. The brewery produces both draft beers, which by Utah law must be below 4% Alcohol By Volume, and bottled beers, which can exceed that ABV limit. But each brew is carefully crafted, offering unique, full-bodied flavor. Customers can buy the bottled beers at Utah State liquor stores, draft beers at a number of local bars and pubs, or visit one of Red Rock’s four restaurant locations for excellent food, alongside their perfectly crafted beverage.

A company giving a nod to local landscape and legend is Uinta Brewing Company. For over 20 years now, this brewing company has been making its way into Utah beer-lovers’ hearts. Named after the Uinta National Forest in north central Utah, all of the brand’s beers also bear names that are borrowed from the state’s wild, rugged terrain. One of their most popular is the Cutthroat Pale Ale, named after Utah’s state fish. The Yard Sale winter lager is a playful name for an epic skiing tumble. Uinta also is exemplary for its sustainable business practices, as it is the first 100 per cent wind-powered business in the state. 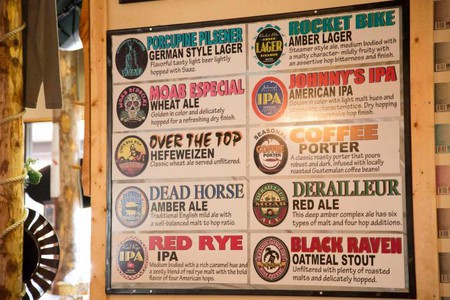 A selection of microbrews | Courtesy of Moab Brewery

Moab is an adventurer’s dream, with endless access to hiking, biking, climbing, and an array of outdoor sports. In the midst of this adventuresome air, the owners of Moab Brewery founded a craft microbrewery perfect for the wandering soul, and the journeyer looking for a no-nonsense, fantastic beer. Fan favorites include the Dead Horse Amber Ale, the Porcupine Pilsner, and the Johnny’s American IPA. The brewery’s onsite pub is a popular watering hole for tired and thirsty travelers after a day of exploring the surrounding terrain. It is an unpretentious place to relish in the unique surroundings, with some of the best beer in the state.

To enjoy the crafted microbrews from the next place on our list, you’ll have to visit their micropub, located in a charming historic trolley garage. Their beers are only served on tap, never bottled, and the food is award-winning. Desert Edge Brewery has been part of the Salt Lake Dining scene for over 30 years as a casual place to enjoy great, in-house crafted beers, and made-from-scratch food that is innovative and fresh. As another brewhouse to use a play on words and local culture for zippy branding, Desert Edge has popular drafts such as the Happy Valley Hefeweizen, and the Latter Day Stout.

Bohemian Brewery creates European-style lagers. Using time-tested techniques, and the highest quality ingredients, the brewers make what they call the “Old School Brew.” The company has a wide selection of both draft beers and bottled beers, available at local bars and pubs, and at state liquor stores. All are made from traditional recipes, with attention to the art and time it takes to craft the perfect lager. The result is a line of beers that offers something for everyone, from a light, sweet, hefeweizen, to a caramel altbier, and dark and full-flavored bock. Pay a visit to their restaurant to enjoy a selection of classic European fare, perfectly paired with a fresh brew. 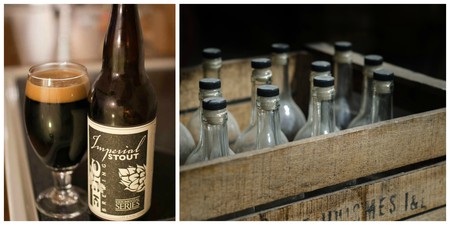 Epic Brewing Company has been around for a little over a decade. Aptly named, the brewery creates strong beers, bottled with an ABV that soars over the 4% limit of drafts. The creators of these high-octane brews are unapologetic foodies, adventurers, and beer-lovers that are taking microbrews to the next level. Epic has three different lines of beers: classic, elevated, and exponential. All of them pack a punch, and are carefully crafted for the perfect balance and flavor. For enthusiasts and connoisseurs, sampling a few brews from Epic is a must, but be careful, the expert brewing makes them easy to drink, but the high alcohol content can sneak up on you.

In the last 25 years, Squatters has become an integral part of Salt Lake City’s downtown restaurant scene. The company is dedicated to what it calls its “Triple Bottom Line: People, Planet, Profit.” Engaging with local nonprofits, sustainable energy and transportation organizations, and movements to improve Utah’s industry, Squatters is a respected member of the community. At its core, the microbrewery makes honest, passion-filled good beers that have been garnering awards for decades. The Chasing Tail golden ale, the Full Suspension pale ale, and the Hop Rising double IPA are some of their most popular brews.