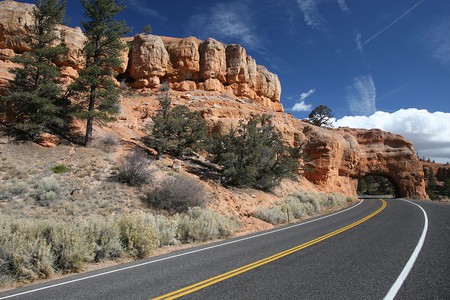 Highway 12, constructed in 1914, is an ‘All-American Road,’ passing through some of the nation’s most rugged and diverse landscapes. Spanning 124 miles, SR-12 plays host to two national parks, three state parks, a national monument, and a national forest. From one of the world’s highest alpine forests to the rust-tinged walls of Red Canyon, discover the beauty of Utah‘s scenic byway and what this famous American road has to offer.

Highway 12 was first built as a forest road in 1914, traveling from Bryce Canyon to the small town of Tropic; it has since gone through a series of reconstructions over the years, including the extension to Boulder in 1985, which turned the highway from a dangerously rugged road to a more manageable scenic route. Today, the road travels from south of Panguitch to Torrey, passing through some of the nation’s most beautiful landscapes: Bryce Canyon National Park, Dixie National Forest, Grand Staircase-Escalante National Monument, the Aquarius Plateau, Red Rock Canyon, and Capitol Reef National Park, amongst many other natural wonders. While some of the backcountry roads are still considered rough and remote, Highway 12 remains a popular scenic route for many. For first-timers, be sure to carry a map and prepare for rough roads, especially in the case of rain or snow. 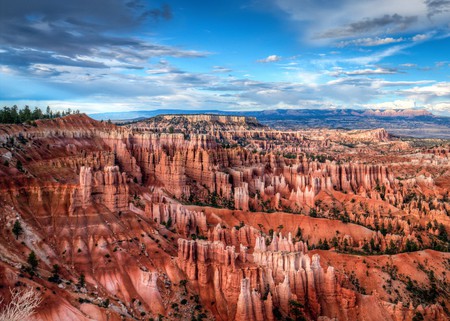 Stopping at the many forests, parks, and natural wonders is what makes the drive along Highway 12 worthwhile. The highlights of Highway 12 include Red Canyon, fit with many trails for biking and hiking, camping, and close-up views of the sculpted limestone walls and geological features of the Paunsaugunt Plateau; and Dixie National Forest, the largest national forest in the state at nearly two million acres with scenic views from Boulder Mountain at 11,000 feet high, hiking, biking, horseback riding, ATV riding, snowmobiling, canoeing, swimming, fishing, picnicking, hunting, and camping. Other memorable destinations are Bryce Canyon National Park, a series of ‘amphitheaters’ etched into the red-stained limestone of the Paunsaugunt Plateau, and plenty of viewpoints, hiking trails, and winter activities for experiencing the park’s beauty; and the Grand Staircase-Escalante National Monument (GSENM) – a 1.9 million-acre conservation land established to preserve wilderness and its intact ecosystems. Here, don’t miss the Grand Staircase, massive geological steps descending to the Grand Canyon, Kaiparowits Plateau and its many mesas, canyons, and archaeological sites, and the Canyons of the Escalante, a series of winding sandstone canyons. 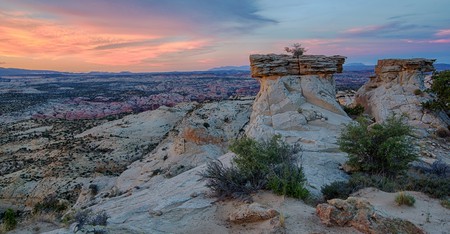 Between Panguitch and Torrey, there are plenty of lodging options if you choose to stay during your visit along Highway 12. For lodging near Boulder, there’s Singing Earth Farm, Boulder Mountain Lodge, and Boulder Mountain Ranch; for the Bryce Canyon area, check out the Best Western Plus Bryce Canyon Grand Hotel, Bryce Canyon Pines Motel, or Bryce View Lodge; and for stays near Escalante, head to Canyons Bed and Breakfast, Cowboy Country Inn, or Escalante Outfitters and Bunkhouse. There’s plenty of campsites along the route and in the many state and national parks, as well as lodging in nearby towns, including Hatch, Henrieville, Tropic, Panguitch Lake, Ticaboo, and Cannonville. 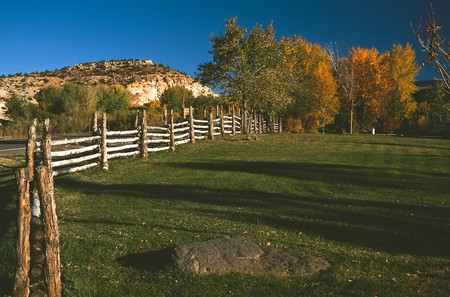 For dining during your visit, head to Hell’s Backbone Grill in Boulder, Cowboy Blues in Escalante, Galaxy Diner in Hatch, The Tandoori Taqueria in Panguitch, or the Stone Hearth Grill in Tropic. There are also plenty of areas to stop for a picnic, or opt for a unique experience and book the cowboy-style dinner at the Wild West Retreat.