The Best Places To Enjoy The Colorado River In Austin, Texas 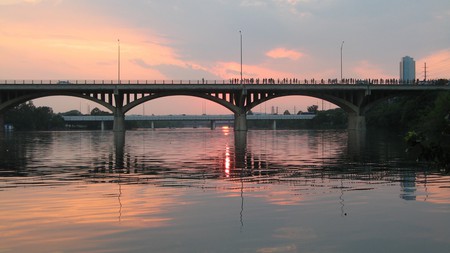 The Colorado River flows right through the heart of Austin, Texas. Dammed in two different spots, it forms Lake Austin and Lady Bird Lake. It is by far the most prominent natural feature in the Texas capital. There are a plethora of ways to enjoy the lake and the stunning scenery that surrounds it.

Cafe, Restaurant, Pub Grub, $$$
Facebook
Email
Twitter
Pinterest
Copy link
Share
Alta’s Café is a hidden oasis in the heart of downtown. It sits right on Lady Bird Lake where Trinity Street dead ends, meaning very few cars come anywhere near it. It is just far enough removed from the Cesar Chavez neighborhood to escape the noise of the never-ending traffic. While the menu features delicious food, coffee, beer, wine, and bottomless mimosas ever first Saturday of the month, the biggest draw of Alta’s is its great patio that perches its costumers right above the water. It has the distinction of being the only restaurant that sits in between the Ann and Roy Hike and Bike (see below) and the water making it the spot to get up close and personal with a meal and the Colorado River.

The Ann and Roy Butler Hike and Bike is one of the best urban trails in all of the country. At just over 10 miles long it completely circles Lady Bird Lake making it the perfect place to hike or run for hours in the middle of the city. If ten miles sounds like too much of a workout, there are pedestrian crossings on each of the four bridges that cross Lady Bird Lake. The Hike and Bike trail has many great vantage points and runs almost constantly on the river’s edge. If that isn’t close enough, the southeastern portion of the trail, known as the boardwalk, runs out above the lake. 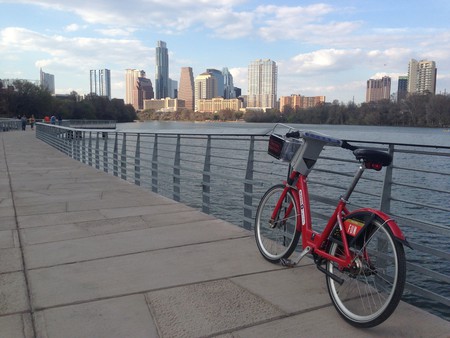 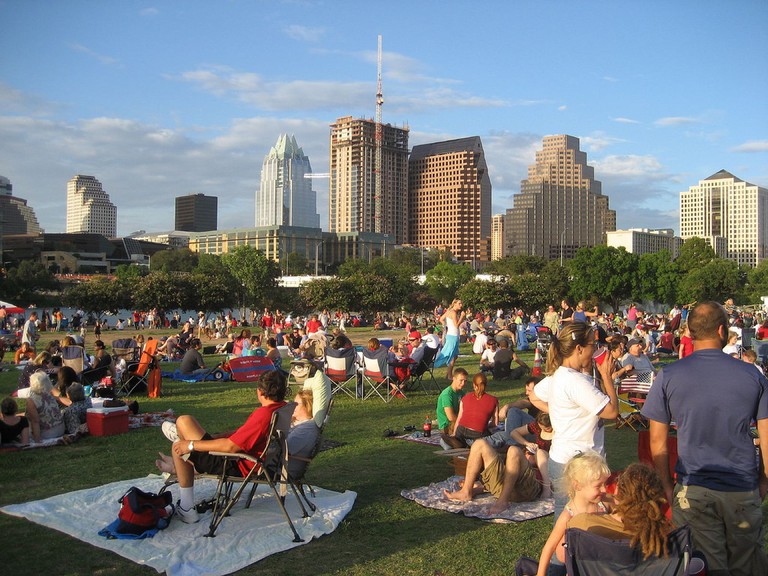 Austin Skyline | © jdeeringdavis/Flickr
Auditorium Shores would be Austin’s premier park if it didn’t sit right next to Zilker Park. It occupies the plot of land just east of Lamar boulevard on Lady Bird Lake’s south shore. It sits directly across from the heart of downtown, meaning the views of the skyline are second to none. It also sees constant use as a music venue, making it the only place where it is possible to take in Lady Bird Lake and a show all at once. When there isn’t music, Auditorium Shores is also a great place for dogs. There is a dedicated off-leash section, and easy access points for dogs to launch into the river, chasing after their favorite ball or stick. 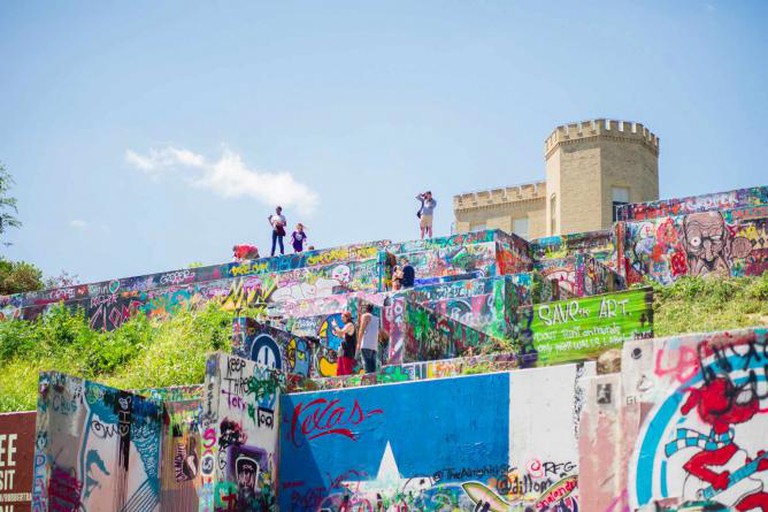 A Creative Commons Image: Graffiti Park | Luke Parker/Flickr
Red Bud Isle seems to be a world away from Austin. This 13 acre strip of land that sits in the most upstream reaches of Lady Bird Lake, is a true escape for people. The whole isle serves as an off-leash dog park, but does not require a dog to enjoy. There is a walking loop and trail that leads through the forested land to the southern tip of the isle, making it a great option for a quick escape of the city.

Boating on the river

Of course, one of the most obvious ways to see what the Colorado River has to offer, is to be on a boat. There are many rental places that offer a full assortment of river worthy vessels, if you don’t have your own. It isn’t the launching point that matters, just the fact that paddling around the river alone or with friends offers some of the best sightseeing (with so many angles to take in the skyline from) and people watching (the lake is always bustling with activity on a nice day) that the city has to offer.

There are a few restrictions to keep in mind while on Lady Bird Lake, however. Gasoline powered vessels and swimming are both banned without a permit from the city. Lake Austin is the place to take out motorboats and jet skis, and it buzzes with activity almost every day. 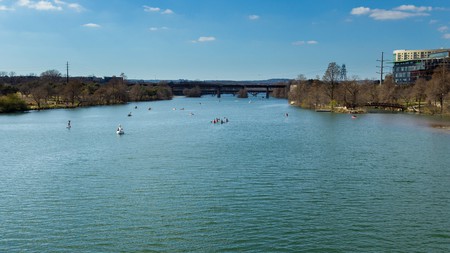 While the South Congress Bridge gets all the love from the evening crowds excited to watch the bats trickle out from underneath, it is far from the most scenic bridge that crosses Lady Bird Lake.

The Lamar Pedestrian Bridge is a much better spot to take in the sights of the river, while being removed from roaring Austin traffic. While there are no bats in the evening there is a spectacular view of the sun setting as it displays an array of colors dancing on the water’s surface. To the east is the railroad bridge, which is covered in some of the best graffiti in Austin. With all the runners and bikers crossing, and kayakers and stand up paddle boarders down below there is plenty of people watching to pass the time as the Colorado slowly trickles downstream. 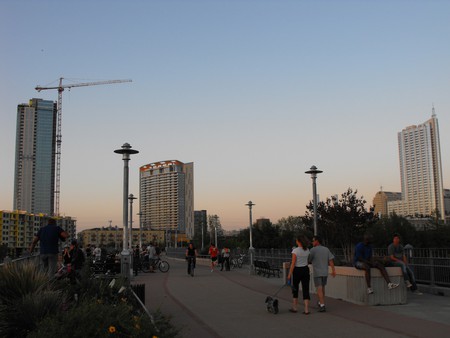