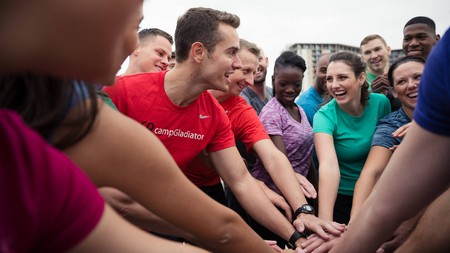 With its temperate climate, Austin rarely experiences all four seasons. The city sees approximately 300 sunny days per year, making it a perfect place for outdoor lovers and adventurers of all types. Between boot camps, tai chi, and team sports, there are countless ways to stay active without going to the gym. As summer temperatures start to soar, we’ve rounded up the best outdoor group activities to get fit and make some friends along the way.

Camp Gladiator (CG)’s mission is to “positively impact the physical fitness and ultimately the lives of as many people as possible.” The company, founded in 2008, now has markets in 11 cities, but the biggest market is Austin, where CG is the number one name in outdoor fitness. Travis LaFaitte, one of the trainers at the Mueller location, says that what sets CG apart is the inspirational energy that binds the community together: “We come from so many walks of life. From pro athletes to working parents and stay-at-home moms, it’s a safe environment for all fitness levels, cultures, and creeds. Not many places have this much diversity all striving to be better together.” With locations and times all over town, you can make it work with even the most hectic of schedules. 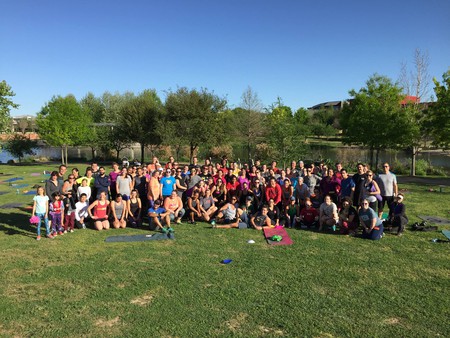 Studies have shown that practicing yoga outside can improve lung capacity, mood, and concentration, and much more. There are multiple opportunities to experiment for yourself in Austin, especially from early June to late July. On Mondays, join instructors from Wanderlust Yoga at Zilker Hillside for free yoga, free snacks, and free entry afterward into Barton Springs Pool. Feeling more adventurous? Wanderlust also runs a Summer SUP series, where you can learn to practice yoga on a stand-up paddleboard. Balancing increases coordination, endurance, and overall strength. Classes start at 10 am on June 17, 2017, and participants should expect to get wet!

If you’re not feeling quite thatadventurous, you can also join iGnite Your Life for female-only, donation-based Vinyasa Flow Classes. Their kickoff event took place on the morning of June 16, 2017, benefitting The Refuge, a local charity, but there will various other classes throughout the summer. Check out the schedule here.
Open In Google Maps
Austin, Texas, USA
Give us feedback

To focus even more on core strength, iGnite Your Life, founded in 2006 by Neissa Brown Springmann, also offers outdoor Pilates classes. With an emphasis on empowerment and fun, iGnite’s mission is to create a positive, inspirational, and personal outdoor fitness experience for women. Check their full schedule for Pilates classes around town, as well as swimming, strength training, and more.

Girls Just Wanna Have Sun ☀️ We have created 2 fab Summer Series to help you soak up the sunshine, stay close to or in the water 💦 & enjoy our beautiful city 🌇 Enjoy yoga on the @rowingdock + swimming + sunrise spin + downtown cardio classes. Link in profile for more info 😎

Thanks to Lady Bird Lake, which winds through downtown, Austinites can enjoy countless water activities. There are multiple companies dotted along the Ann and Roy Butler Hike and Bike Trail where you can rent canoes, kayaks, and stand-up paddleboards, but Texas Rowing Center (TRC) is one of the most established and most competitively priced.

TRC also offers a six-week introduction to rowing class for $199. Rowing is one of the best low-impact, full-body aerobic exercises, and Texas Rowing Center makes it easy to jump in no matter your fitness level. Now in its 30th year, the TRC intro class is free when you join for a six-month or full year membership, which also includes unlimited access to rowing, kayaking, canoeing, and stand-up paddling.

For a more social rowing experience, head to the Rowing Dock for a Full Moon Paddle, which offers the unique opportunity to see Austin’s beautiful skyline from the water at night. The Rowing Dock also hosts other social events such as Yappy Hour, where your second hour of rental is free when you bring your dog.
Open In Google Maps
Austin, Texas, USA
Give us feedback

ATX Sports and Adventures is Austin’s home for adult recreational sports and adventure trips. The group currently offers co-ed leagues and tournaments for kickball, volleyball, softball and flag football, plus men-only leagues for basketball and flag football. Football leagues tend to take place on Sundays at Krieg Fields, with six regular season games and playoffs for the top teams. Sand volleyball is one of Austin’s most popular and social sports, and ATX SA is just one of the leagues in town, with most games and double headers taking place in the evening. For a day on the diamond, join one of ATX SA’s softball or kickball teams—or check out Capital City Softball, Austin Sports and Social Club, and ClubWaka for more times and locations. 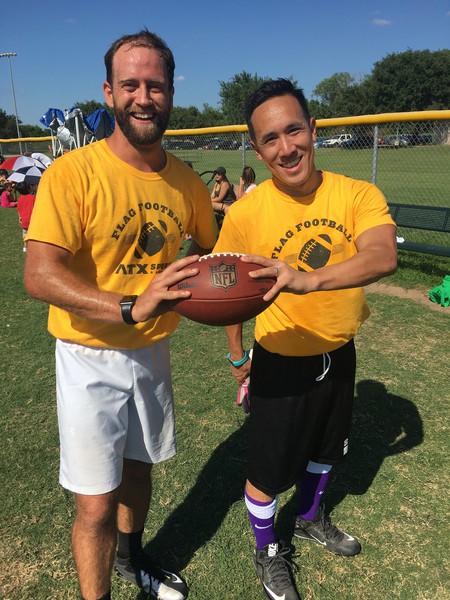 Ultimate, once known as Ultimate Frisbee™, started in the late 1960s, becoming an official collegiate sport in the late ’70s and growing in popularity ever since. Generally played on fields that are similar to a football field (but with deeper endzones), the game sees teams of seven compete by completing passes in any direction. Players may not run with the disc: upon catching it, players stop, pivot and throw the disc again within seven seconds to avoid a turnover.

Fast-paced and no contact, the sport has become so popular in recent years that many cities such as Austin now have their own professional ultimate teams. The Austin Sol made their debut against the Dallas Roughnecks on April 2, 2016, with many players on the team coming from existing elite club teams. The season runs from April to July, so be sure to check the team schedule to enjoy as a spectator, or find a game of pickup on sites such as Austin Ultimate and Pick Up Ultimate.

Photos from Saturday's game are up on our Facebook page.

Running may not seem like a group activity, but the folks at Austin Runners Club would beg to differ. This training group meets throughout the week, with most runs taking place in the morning to beat the summer heat. The club designs group runs for all levels of experience, whether marathon training, intermediate or beginner. Join them for track running on Tuesdays and Thursdays at Austin High School, or take a more challenging hill run on Monday nights in the North Hill neighborhood. Check their website for a full schedule and for information on the Distance Challenge, which helps participants train for a series of six races at increasing distances through the fall.

Rogue Running is another group in town offering year-round training and marathon programs; it’s also famous for themed runs, including The Torchy’s Run, The Midsummer Night Run, and Moontower Run. For $15 entry, participants plot their courses, which range in distance from three to 10 miles (4.8–16 kilometers), earning prizes and giveaways along the way. Like their Facebook page to learn more.

Rogue was founded in 2004 by Austin runners, for Austin runners. In honor of #smallbizsaturday, we'd like to thank all of you for running, racing, shopping and traveling with us over the past 12 years; you've helped to create something truly special, and truly local. Today and every day, please continue to #shopsmall whenever possible! 📷@azulox

This ancient martial art form is one of the best ways to promote health, fitness, and longevity. By practicing a sequence of slow movements, students develop strength and coordination to enhance the body, mind, and spirit. One of the most scenic ways to try it out in Austin is with Tai Chi Immortal. Instructor Jingyu Gu, Ph.D., Lic. Acu., leads sessions beneath the trees at Shoal Creek. Try your first class free and check their website for tuition information.

Whether you have Tour de France aspirations or are simply looking for a low-impact activity, cycling is a beautiful way to get fit and see the sights of Austin at the same time. As the home of cyclist Lance Armstrong, it’s no surprise that Austin has countless bicycle shops to help get you started. Many shops such as Armstrong’s Mellow Johnny’s host social rides, or you can join the citywide Social Cycling Facebook group for information on weekly rides. Original founders Keith Byrd and John Acker work with volunteers to coordinate and guide rides such as the Tuesday Yoga Ride, Thursday Night Social Ride, and Saturday Caffeine Cruise.

We're open today (@juanpelotacafe, too)! In observance of Memorial Day, we will close at 4 PM.