The 11 Most Unique Experiences in Austin 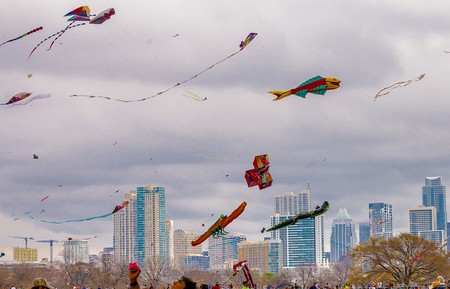 The slogan of the capital of Texas is “Keep Austin Weird,” adopted to promote local businesses—however unique. Today, the slogan stands as much for Austinites as it does for Austin businesses, anything that celebrates the city’s quirky character and charm. From cathedrals of junk, iconic festivals to quippy local advertisements, Culture Trip has rounded up 11 of the most unique Austin experiences that live up to the motto.

Explore the Cathedral of Junk

Easy to miss from the street, the Cathedral of Junk stands in the backyard of a small, unassuming house owned by Vince Hannemann in South Austin. Vince began work on the Cathedral in 1988, creating a hollow framework that now contains a curated assortment of discarded cables, knick-knacks, and bicycle parts—with more added every year. Invisible cables and outlets power illuminated clocks and beer signs, and the structure really does feel like a cathedral with its vaulted ceilings and stairways. Wind your way to the heart of the Cathedral, where the great chair sits in the center of the “Throne Room.”

Go two-stepping at the Broken Spoke 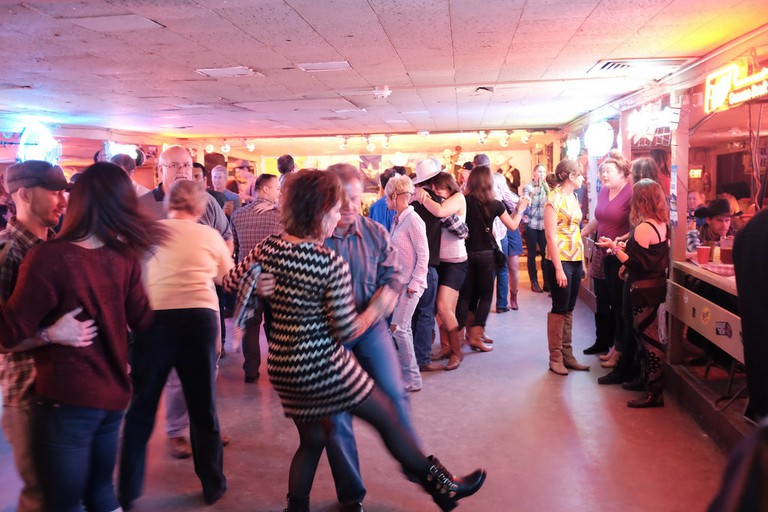 Broken Spoke Dance Hall, Austin | © Brian Holsclaw / Flickr
With live music every night, plus beer and classic chicken fried steak, this traditional Texas dive bar is the best place in the state’s capital to see two-steppin’ at its finest. An Austin establishment for over 50 years, the Broken Spoke advertises itself as the “last of the True Texas Dancehalls and damn sure proud of it!” Visitors can learn the two-step, Western Swing, and the Cotton-Eyed Joe, with classes offered Wednesday to Saturday from 8:30 p.m.–9:30 p.m. Get the steps down so that you can put them into practice when the live band goes on later!
Open In Google Maps
3201 South Lamar Boulevard, South Lamar, Austin, Texas, 78704, USA
+15124426189
Visit Website
Give us feedback 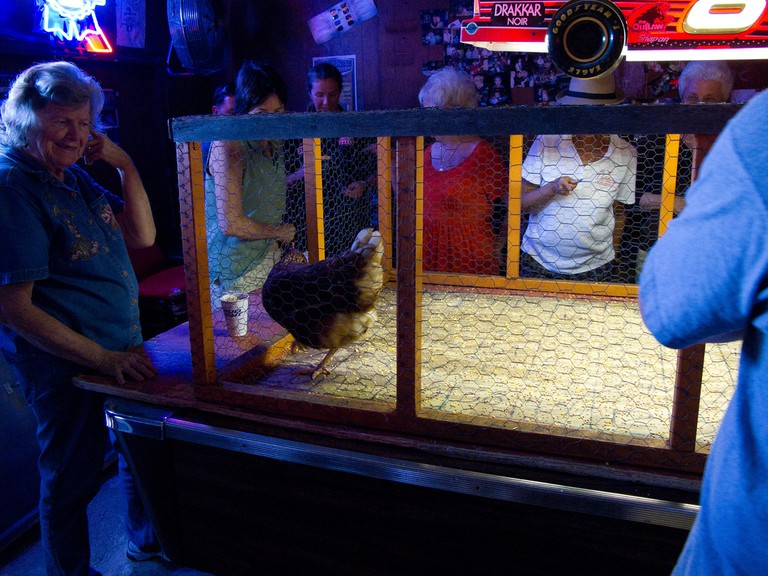 Chicken Shit Bingo at Ginny's Little Longhorn Saloon | © Gary J. Wood / Flickr
Another favorite Austin dive bar and one of the city’s best-kept secrets, Ginny’s Little Longhorn Saloon is also host to one of its weirdest weekly events. On Sundays, locals gather here on Burnet Road for a unique version of Bingo called “chicken shit bingo.” The game involves chickens, chicken feed, and what chickens do after they eat. Participants purchase a $2 ticket, which corresponds to a number on the table. Grab a beer and watch: if the chicken eliminates on your ticket’s number, you win a cash prize.
Open In Google Maps
5434 Burnet Road, Allandale, Austin, Texas, 78756, USA
+15125241291
Visit Website
Give us feedback

While not entirely unique to Austin, food trucks certainly have found a home here. Many of the city’s favorite brick-and-mortar businesses—both restaurants and retail—started out in a food truck or trailer. From coffee and ice cream to pizza and Thai food, there is a food truck for every taste and fancy dotted all over town. The trucks are the American dream in a nutshell—a business (and in this case, a menu) built from scratch, blossoming into success. The phenomenon was well captured in the 2014 film Chef, in which Jon Favreau’s character drives his new food truck through cities such as Miami, Austin, and L.A. to generate publicity and sample his menu. 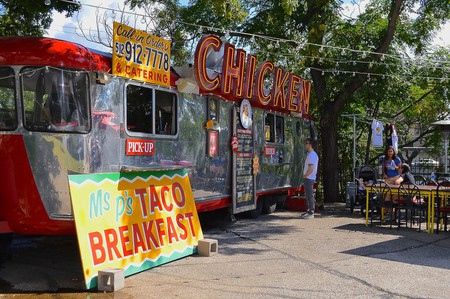 Wander the grounds at Laguna Gloria 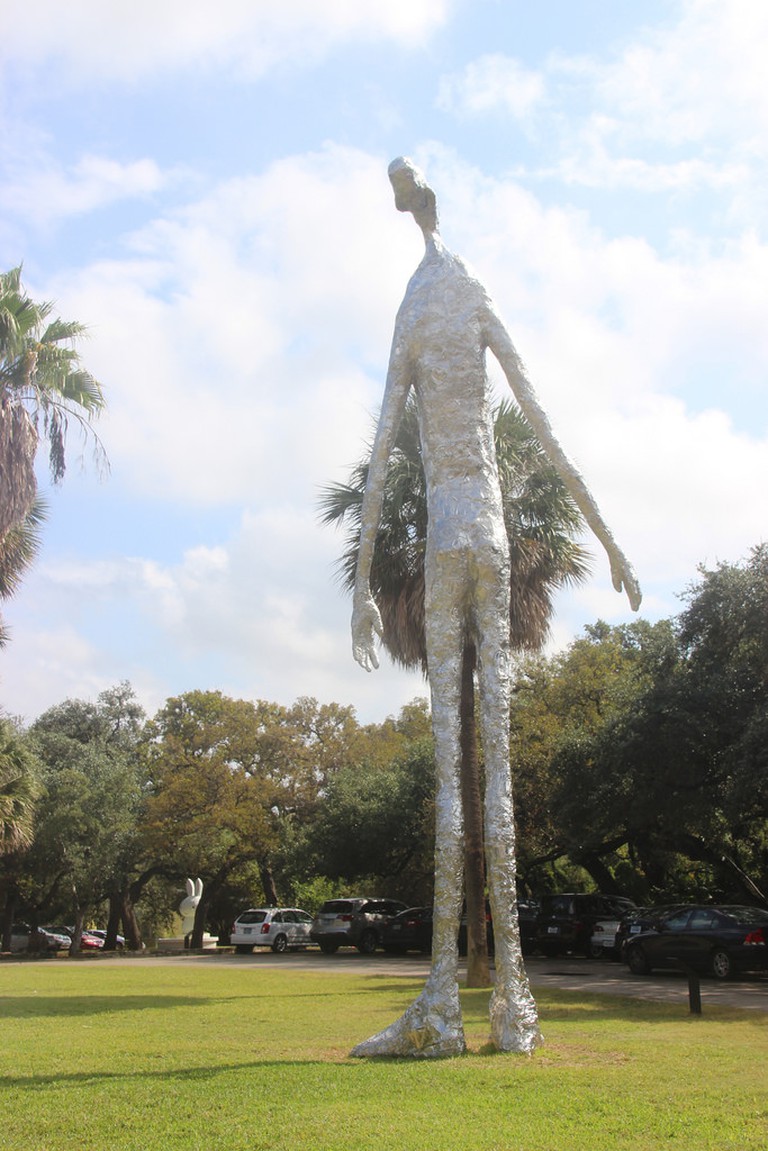 Sculptures on the grounds of Laguna Gloria | Ariana Vincent/Flickr
Situated on 14 acres overlooking Lake Austin, this property once belonged to the “Father of Texas” and Austin’s namesake, Stephen F. Austin, who served as the first Secretary of State in the new Texas republic. The restored 1916 Italian-style villa was home to another Texas legend, Clara Driscoll, and the beautiful grounds are the second campus of downtown sister museum, the Contemporary Austin. Peruse the Gatehouse Gallery and wander through the Betty and Edward Marcus Sculpture Park, which features long-term and permanent contemporary sculpture and unique art installations.
Open In Google Maps
3809 West 35th Street, Tarrytown, Austin, Texas, 78703, USA
+15124588191
Visit Website
Give us feedback

Now in its fourth year, The Weird Homes Tour™ showcases the wackiest, most outlandish abodes that celebrate Austin’s quirky charm. The tour consists of a self-paced, self-driven excursion across the city, and 10% of all proceeds go to local nonprofits that fight for affordable housing. This year, the tour spread across the city as far west as the Capital of Texas Highway, and the designated charity was Foundation Communities, the Austin-based affordable housing developer. Read more and explore all of this year’s homes here in our guide. 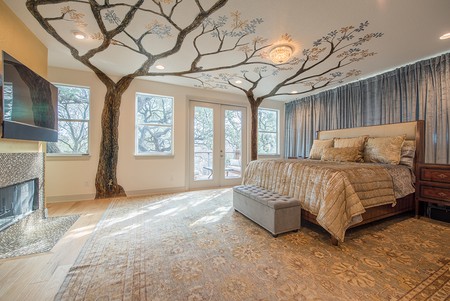 Austin is famous for its music festivals, but one of the city’s longest-running festivals is its quirkiest and least known. Now in its 54th year, Eeyore’s Birthday celebrates a scene in A.A. Milne’s Winnie the Poohbooks: gloomy Eeyore thinks everyone has forgotten his birthday, only to find an elaborately planned surprise party. In 1963, several students gathered for a spring picnic to celebrate Eeyore, complete with a maypole, beer, and a donkey draped with flowers. Today, the party continues every April with a free festival that doubles as a fundraiser for non-profit groups in Austin. Costumes are encouraged, and guests can enjoy face painting, henna, live music and, of course, the maypole. 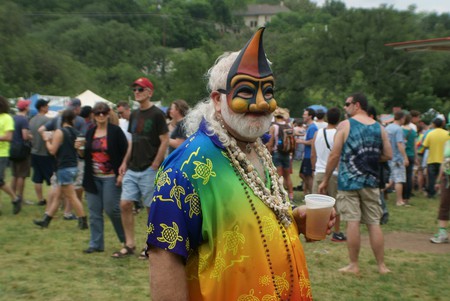 As part of its anniversary celebrations, East Austin neighborhood restaurant Contigo hosts a cow tongue eating contest on its patio. Guests receive a napkin, a glass of water, an apron, and a cooked, two-pound cow tongue. The winner wins free burgers from Contigo for a year. Other contests include the corn hole tournament (the winner earns a $1000 house account) and the beer stein hoisting competition: a test of endurance, alcoholic fortitude, and a bacchanal feat of strength and will. The contestant who can hold a heavy beer stein with a straight arm for the longest earns free beer for a year. The festivities also include food, drinks, live music, and more games.

Restaurant, Mexican
Facebook
Email
Twitter
Pinterest
Copy link
Share
Map View
Established in 1975, El Arroyo, a downtown restaurant, is known for serving queso, tacos, margaritas and more—but it is most well known for its quirky sign out front. The message changes daily, entertaining commuters and attracting attention on social media worldwide. While the sign was knocked down in a severe storm in February 2017, it quickly returned with the message, “New sign, who dis?”
Open In Google Maps
1624 West 5th Street, Austin, Texas, 78703, USA
+15124741222
Visit Website
Give us feedback

Fly a kite in the annual Austin Kite Festival

Another annual festival that predates bothAustin City Limits (ACL) Festivaland South by Southwest (SXSW), Austin’s Kite Festival began in 1929, making it the longest continuously running community kite festival in the United States. Originally a tournament with a mission to encourage creativity in children, the festival was started by the Exchange Club of Austin and held for the first time in Lamar Park. The event moved to the newly opened Zilker Park in 1936, where it has taken place ever since.