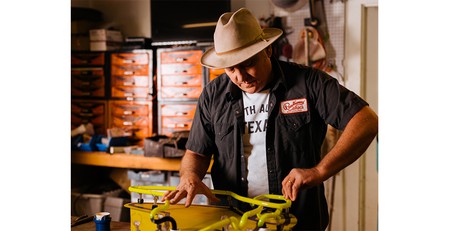 Artist Todd Sanders moved to Austin, Texas, 30 years ago, dazzled by the city’s warmth and creative spirit. That early inspiration propelled him to become one of the most celebrated makers of neon signs in the US.

When Todd Sanders was 21 years old, he and a friend set off from the East Texas town of Huntsville, where he was attending art school, to New Braunfels, for a night of music and dancing. The pair took a wrong turn in their Volkswagen bus and ended up 50 miles north of their destination, in Austin. 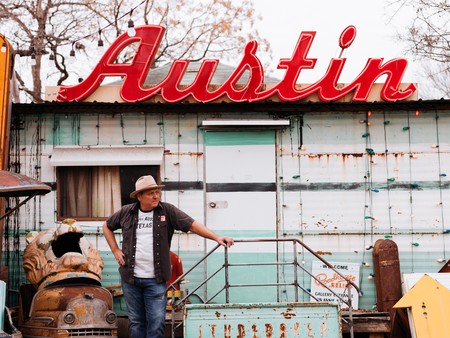 Driving through this unfamiliar city, they went past lively music venues, street art and tattooed women – sights they had never previously encountered. Sanders sensed something exciting about Austin, and as their bus was bathed in the red glow of a big neon sign with the words ‘TERMINIX PROFESSIONAL PEST CONTROL’ and a six-legged metal insect on it, something clicked inside him. “I turned and said to my buddy, ‘I’m going to move here and make neon signs,’” says Sanders, who at the time had no experience in that field. “And that feeling stuck with me.”

Soon afterwards, in 1992, Sanders dropped out of school and, with only $200 in his pocket, moved to Austin and began introducing himself to every neon-sign shop in town. Thirty years later, he is among the most celebrated neon artists in the country. His studio and gallery, Roadhouse Relics, located in South Central Austin, has been profiled in the national media, his hand-made signs have been featured in movies and on album covers, and his clientele includes musicians Willie Nelson and Billy Gibbons of ZZ Top, actor Johnny Depp and artist Shepard Fairey. 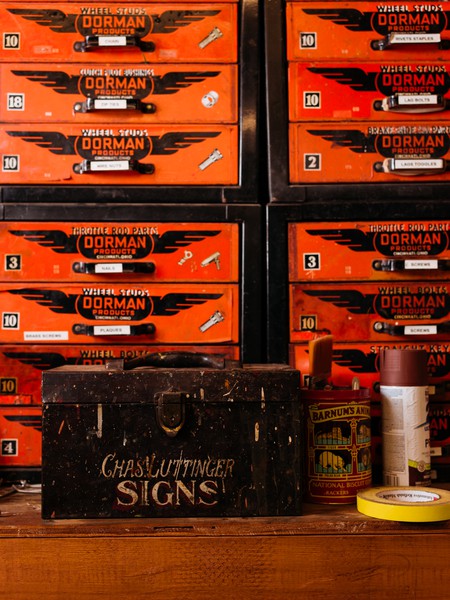 Sanders’s glowing, whimsical creations are his attempt to capture the spirit of Austin, something he feels indebted to. “I owe everything to this town and I will never pay that back, although I am always trying to,” he says. His art may be flamboyant, but Sanders is humble and reflective. He rejects the notion that he has any talent; rather, he argues that his works are the product of tenacity. “I know what I want to see and I keep working at it until I see it, but I am not a natural,” he says. “Sometimes it takes a year to design a piece. They don’t come easy – my life didn’t come easy, but I stuck with it.”

Sanders says this spirit of determination comes from his family – in his words, “hard-ass, East Texas stock.” Aside from his mother, who nurtured his passion for drawing at an early age, Sanders says his family looked at art as “something [that] stupid people did on the weekends.” 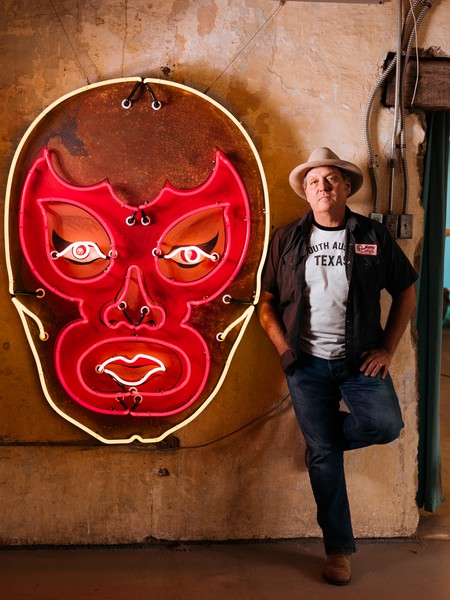 His path to prominence was neither easy nor quick. Persistence was key, as he was turned away from each commercial sign shop he approached. Finally, he stumbled upon Ion Art, a small, independent shop with a commitment to creativity and artistry that Sanders had not witnessed anywhere else. Over the next two weeks, he repeatedly asked for and was denied a job there. Then – just as he was about to run out of money, he says – Ion Art hired him for a two-week mural project. He ended up apprenticing there for the next three years, learning the ins and outs of neon-sign craftsmanship. Here, Sanders fell in love with the old signs from the 1950s and began to emulate the font styles, brush techniques and paint types of that era.

By 1995, Sanders felt compelled to start his own vintage neon-sign business. Roadhouse Relics began in the yard beside the trailer he was living in, and it was here that he mastered his method of weathering pieces to give them their vintage 1950s aesthetic.

Sanders says he spent years eating cheaply and eschewing a personal life while perfecting his craft. As everyone around him got on with their lives and moved into “nice houses,” Sanders considered quitting. “It hurt real bad – I’m sitting in the backyard crying my eyes out, going, ‘I’ve gotta do something else,’” he recalls. “And then something comes to you and you go, ‘What are you going to do? There is nothing else – keep going.’” 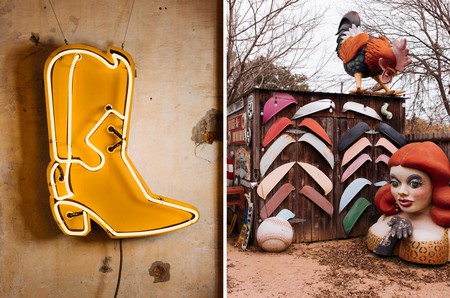 Eventually business started coming in. At one point, Sanders was responsible for at least 30 local business signs before he pivoted towards producing the works of art he’s known for today. He now makes most of his pieces for private collections or galleries.

Sanders says his work carries meaning on several levels. Through his strict commitment to the techniques and materials employed by mid-century sign-makers, Sanders’s pieces provoke a certain nostalgia for what he calls “a simpler time.” But the artist’s love for his craft goes deeper. “Neon is one of the six noble gases that exist in the Earth’s atmosphere,” he says. “In a way, neon is speaking to us on a primal level. It’s like a modern campfire. It speaks to a part of us that has been speaking to us for millions of years. Everyone who comes in here has a real connection to that gas glowing in a tube.”

He’s unsure that his business would have taken off anywhere other than Austin, with its eclectic, accepting and creative ethos. “In Austin, they don’t care what you’re into – just be into it,” Sanders says. “Be true to yourself and Austin will embrace you.” 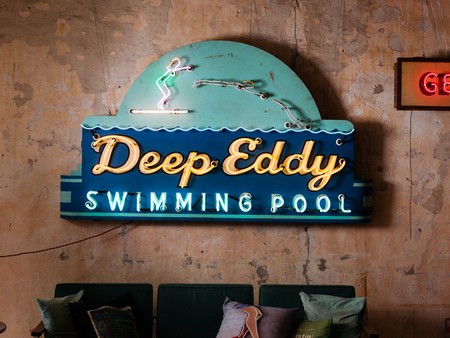 Steve Wertheimer, owner of Austin’s iconic live music venue The Continental Club, has commissioned 15 pieces from Sanders over more than 20 years. He says Sanders’s impact extends beyond the venue’s walls. “[Sanders] has been an influential part of Austin’s texture,” Wertheimer says. “When an artist leaves a mark bigger than the works themselves, that is truly a gift.”

Sanders believes his best work is yet to come and that a creation of his will one day land in New York’s Museum of Modern Art. However, his main wish is to live on in his own city’s art canon. “My pieces are inspired by the spirit I felt when I first arrived in Austin,” Sanders says. “I want to inspire people, and hopefully I will live here years beyond just my life.” 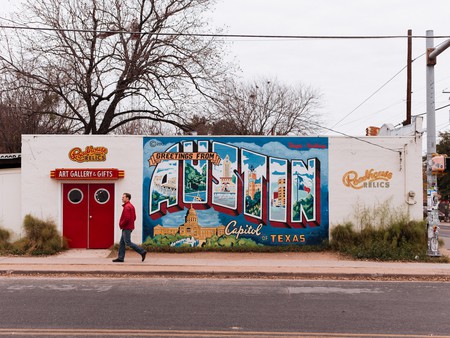