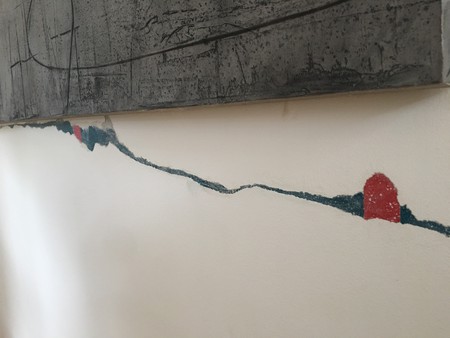 Aware for several years that her mother’s home concealed a large-scale artwork by the modern master Sol LeWitt, Jonna Hitchcock has only recently endeavored to uncover Wall Drawing #679 from behind a layer of sheetrock—and has since been met with a roster of surreal complications. The Hitchcocks’ perplexing journey to “un-erasing” the mural is a real-life lesson in the mischievous paradoxes of conceptual art.

It began with a spontaneous quest to unearth Sol LeWitt’s Wall Drawing #679 from behind the sheetrock mud of a Houston resident’s living room wall. A grid of red and yellow intersecting lines set to a blue backdrop, the mural was commissioned by local architect William F. Stern when he owned the house 27 years earlier. At 30 by 10 feet, the commission was completed in the early 1990s.

Original wall with Sol LeWitt and the wall today with just a slight peek at what still lies under the paint. With a nod to Rauschenberg we are ready to un-erase this Sol LeWitt!

Some 12 years later when Stern passed away, he bequeathed his home and his art holdings to the nearby Menil Collection. Included in his estate were the instructions for executing Wall Drawing #679, in which LeWitt provided a detailed account of how, precisely, to render the artwork.

A pioneer of instruction-based conceptual art in the 1960s and ’70s, LeWitt gained prominence for his highly mathematical wall drawings that required extreme precision and large teams of skilled workers to create. “LeWitt likened his wall drawings to a musical score,” the Menil Collection explained to Glasstire. “The artistic creation is in the design. The execution depends on talented craftspeople (or in the case of the musical score, the musicians) who adapt the design.” LeWitt’s instructions are paramount, while the completed artwork is secondary.

The Menil maintained possession of Stern’s art collection as per the architect’s dying request, but for undisclosed reasons, they sold his award-winning modern house to Jonna Hitchcock’s mother, a long-time art appreciator and collector, in 2014.

Before she moved in, the Menil Collection decided to conceal the mural behind a layer of sheetrock. The artwork was site-specific, and to remove it from the premises would cause irreparable damage. In a letter responding to Glasstire‘s article, the museum further clarified that LeWitt’s “wall drawings are designed to have a life cycle; they are temporary installations.” So when the house was sold and the museum relinquished ownership over the mural’s physical form, the life cycle of Wall Drawing #679 essentially came to an end.

But Jonna Hitchcock and her mother intend to resurrect it. 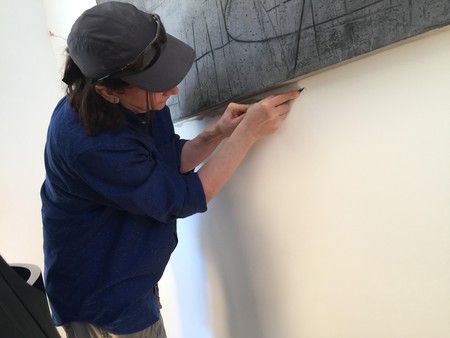 “When my mother bought the house, the Sol LeWitt was only mentioned in passing,” Jonna Hitchcock recalls. “When we began to do some research, we found several magazine articles that had been written when Stern first built the house, [and] later when it was spotlighted for interior design.” A spread in Elle Décor exhibited the mural in its original glory, which naturally piqued the Hitchcocks’ interest regarding whether it could be safely uncovered and restored.

“It’s difficult to say whether my mother would have ever tried [to uncover the drawing],” Hitchcock says, if not for the visit of a persuasive family friend, John, just before Christmas 2017. His vehement curiosity prompted what the Hitchcocks were so reluctant to try: “scrap[ing] just a little.” And to their surprise, the mural hadn’t been directly painted over; rather, a thin layer of sheetrock was applied—one that crumbled away with relative ease.

Hitchcock, who lives in a nearby neighborhood, wasn’t there when the sheetrock was initially pierced. But she received an ecstatic text from her mother, exclaiming: “John just scraped on the wall and the Sol LeWitt is there!”

“I began frantically texting back to stop him because I immediately thought that we should document what was happening,” she remembers, “and I wanted to get someone who knew what they were doing to advise so we did not damage it.” But the “intoxication” of uncovering the masterwork led John to scrape away a thin line across the wall, “just to see each color in the grid pattern.” 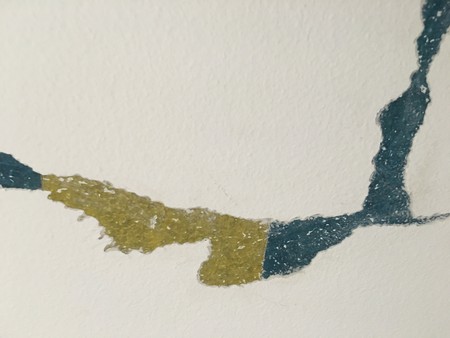 It also prompted Hitchcock to helm a project titled Un-Erasing Sol LeWitt. (The name references a drawing that Willem de Kooning gifted to Robert Rauschenberg, who famously proceeded to erase it and re-present it as a new artwork in 1953.) Hitchcock and her mother are planning a forthcoming documentary in which every step of the LeWitt’s recovery will be chronicled for the public to see. So far, the ambitious duo have revealed a long, thin strip of Wall Drawing #679, but Hitchcock says that they’re currently stalled as they wait for expert opinions.

Whether the Hitchcocks can actually “un-erase” Wall Drawing #679 is a conundrum. Logic may dictate that she who owns the wall also owns the artwork on said wall, but this is not the case in the wacky world of conceptual art. Jonna Hitchcock’s mother technically owns the paint and the materials on her wall, but she doesn’t own Wall Drawing #679.

That’s because the drawing exists primarily in Sol LeWitt’s instructions, not on the wall itself. “In conceptual art the idea or concept is the most important aspect of the work,” Sol LeWitt had said. “When an artist uses a conceptual form of art, it means that all of the planning and decisions are made beforehand and the execution is a perfunctory affair. The idea becomes a machine that makes art.”

In other words, conceptual art separates an idea from its physical manifestation. The idea is everlasting like the soul of an artwork, but the paint and materials that ultimately constitute that idea are transient like the body. Eventually, the body has to die, but the soul can live on indefinitely. And the soul of Wall Drawing #679 still exists in the Menil Collection as long as LeWitt’s instructions remain. 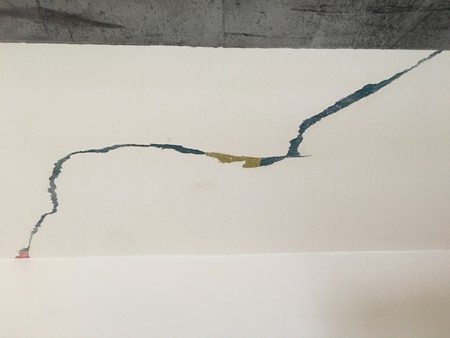 Un-erasing Sol LeWitt has since been met with extensive backlash.

“The artist was very clear in his philosophy and in the language of certificates of ownership for his works; the Menil owns this work, not merely its instructions,” wrote Steven Evans, former Managing Director of Dia:Beacon in a comment responding to the same Glasstire article. “Any interpretation otherwise is either misunderstood, misinformed or at worst, disingenuous. The wall drawing (it’s not a painting) at the residence is no longer a sanctioned work of art by LeWitt.”

According to artnet News, “the Menil seems to be begrudgingly tolerating the project,” noting that Hitchcock and her mother have the right to do as they please in their own home. But the museum has made a point to clarify that the artwork they aim to “un-erase” is no longer a Sol LeWitt. Consequently, as Paula Newton wrote in Glasstire, the Hitchcocks “are really just messing up a perfectly good wall.”

But Jonna Hitchcock is forging ahead, arguing that those who oppose the endeavor “either believe in the principles of conceptual art, which means that what we are uncovering is not Sol LeWitt’s Wall Drawing #679 because the Menil owns [the instructions for that artwork], or they in fact do find something of value in this beautiful wall drawing, which continues to live under the paint and sheetrock mud.”

Ultimately, the Hitchcocks aren’t claiming to own the drawing, nor do they intend to move forward without the guidance of conservators—but the allure of potentially restoring Wall Drawing #679 is simply too tempting to resist.

“This is once in a lifetime opportunity to uncover what was a significant work of art from a major conceptual artist,” Hitchcock says. “What modern art-lover would find a Sol LeWitt under a crumbly layer of sheetrock mud and just ignore it?”