Top 10 Things to Do in Georgetown, Texas 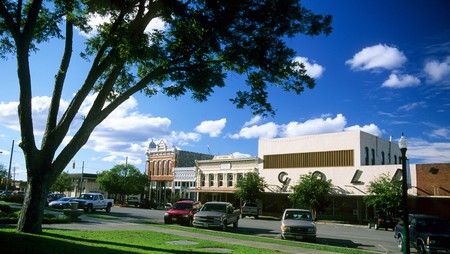 About half an hour north of Austin, in Texas, Georgetown strikes a careful balance between honoring its heritage as a railroad town and crafting a new identity. This artists’ haven is beautiful both in the spring, when public art is accented by wild red poppies, and at Christmas when the “most beautiful town square in Texas” is adorned with fairy lights.

Theater
Facebook
Email
Twitter
Pinterest
Copy link
Share
The Georgetown Visitors Bureau goes above and beyond to keep visitors abreast of timely events and local history. Learn about Georgetown’s award-winning cultural district, which has been recognized by the Texas Commission of the Arts, and visit during the annual Red Poppy Festival, hosted in the town square during the last weekend in April. In addition to helpful staff members, the Visitors Bureau has four bicycles that can be rented for a 24-hour period free of charge. (Another 40 free bikes can be found at the nearby public library.) If visiting an information center in person is unappealing, consider downloading the free app, Explore Georgetown, Texas, which includes an events calendar. The application is available on iOS and Android devices. 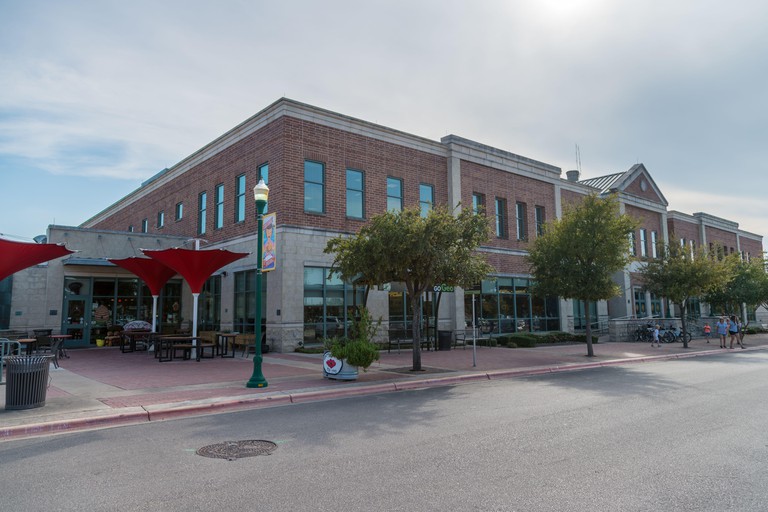 © Marcelo Vinante / Alamy Stock Photo
Just off of the town square, the 50-year-old Georgetown Public Library lets patrons do more than check out books. This vibrant center for the arts has an attached art gallery, concert hall, and coffee shop that’s open to the public. Part of the Georgetown Sculpture Tour can be found in and around the library, as well as in the town square and San Gabriel Park. For more on Georgetown’s involvement in the arts, including where to find more instances of public art, check out this website.

Theater
Facebook
Email
Twitter
Pinterest
Copy link
Share
In a town square surrounded by Victorian storefronts, the Palace’s art deco marquee stands out. The Palace Theatre, built during the Depression as a silent moving-picture theatre, gained its iconic façade during a renovation in 1936. By the time it closed in 1989, the Palace had been the oldest continuously operating movie theatre in the same building in Williamson County. In the 1990s, local citizens rallied around the historic theatre, determined to preserve it; and in 2001, the live theatre opened to the public. Now, the flourishing Palace boasts an impressive lineup of professional-quality live performances and educational outreach programs.

Bar, Market, Restaurant, American
Facebook
Email
Twitter
Pinterest
Copy link
Share
Mel’s Lone Star Lanes finds a way to cater to every demographic. The bright family bowling area has 28 lanes, a classic arcade and a faint scent of sugar. Fast food and unique culinary choices can be found at the alley’s restaurant, which kids will love. The connected CJ’s bar has another row of 12 bowling lanes, but that is where the similarities to Mel’s end. Traditional seating is limited to Mel’s family-friendly side, while CJ’s seating features several cozy couches. Pool tables, a dance floor, and shuffleboards surround a full-service bar. CJ’s is primarily a catering company, and its fare has been voted the best in Georgetown every year since 2012. 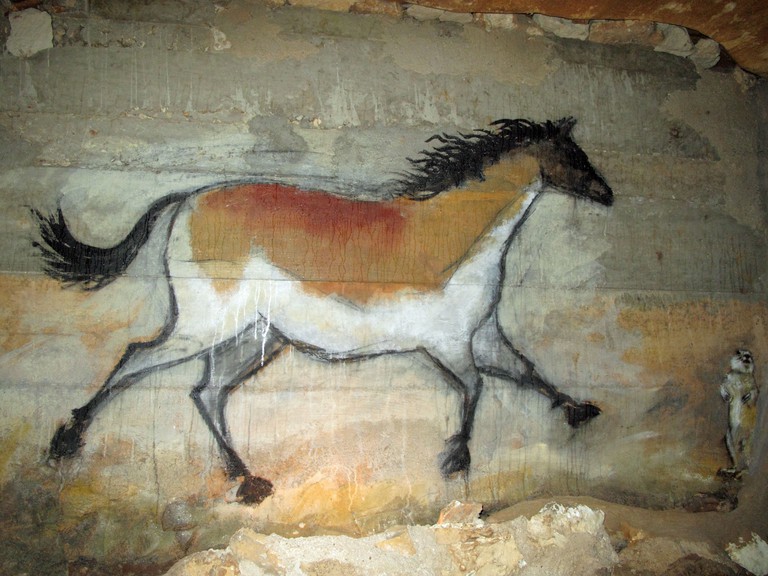 © Stephanie Friedman / Alamy Stock Photo
In 1963, a Texas Highway Department core drilling team discovered what may be the most well-preserved cavern in Texas. Archaeologists have since unearthed the fossils of several prehistoric fauna and flora, some of which can be seen here. The popular Adventure Tour is led by friendly and knowledgeable guides who recite the fanciful names of different cavern areas and formations, such as Short Man’s Revenge, Castle Balcony, and Lake of the Crescent Moon. Inner Space offers tours for the more adventurous, which are not recommended for travelers who fear the dark or enclosed spaces. Young visitors will also enjoy the center’s playground and “mining” area. Comfortable walking shoes are a good idea, and the caves themselves are not wheelchair accessible.

Cafe, Diner, Market, American, $$$
Facebook
Email
Twitter
Pinterest
Copy link
Share
The Monument Cafe opened in 1995 with the mission of bringing local, healthy, and natural food to Georgetown residents. While the market has an artsy farmer flair, the cute cafe takes after mid-century diners. When asked about the best place to eat in town, many residents will list the Monument Cafe’s organic selections. What the roadside diner cannot grow in the expansive garden is sourced from the local farmers who sell in the market next door.

Park, University
Facebook
Email
Twitter
Pinterest
Copy link
Share
San Gabriel Park is one of three parks in Georgetown with disc golf courses that are open to the public (the other courses are at Rivery Park and Pinnacle Park). Additionally, this charming park is one of the locations for the Georgetown Sculpture Tour. Several hiking and biking paths have entrances along the San Gabriel River, and it is dotted with benches, drinking fountains, and restrooms. The park also features baseball diamonds, a community center, swing sets, and a sunken garden. San Gabriel Park is also the staging area for events like the annual Chisholm Trail Day in mid-October. 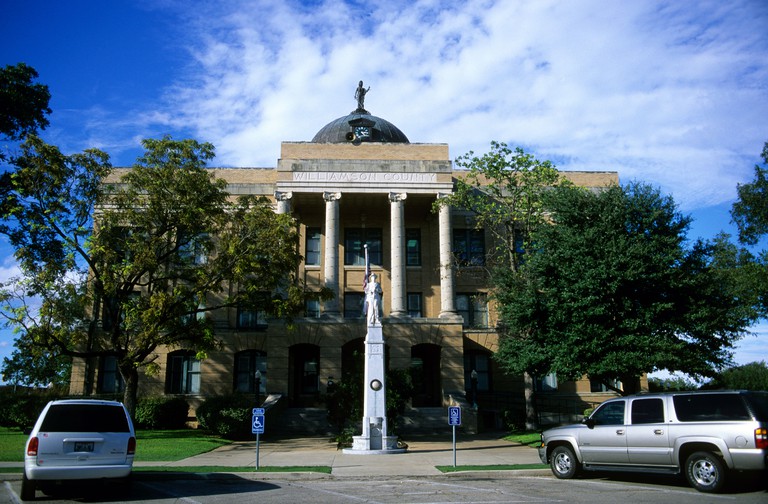 © David R. Frazier Photolibrary, Inc. / Alamy Stock Photo
The Williamson County Courthouse is the centrepiece of the “most beautiful town square in Texas”, and it’s more than just a landmark — the neoclassical monument anchors the central business district and houses the county’s judicial offices. Free guided tours are available from the nearby Williamson Museum. In the historic buildings near the courthouse there are charming establishments, such as the Georgetown Antique Mall, which boasts an impressive consignment of Civil War memorabilia and Cianfrani, a coffeehouse with a wide selection of drinks, snacks, and art pieces for sale. The Town Square (which bills itself as “anything but square”) is also home to several pieces from the Georgetown Sculpture Tour.

School, University
Facebook
Email
Twitter
Pinterest
Copy link
Share
Southwestern University has state-of-the-art research labs and athletic areas in addition to its liberal arts heritage. History and architecture buffs will want to stroll around the campus to appreciate its well-maintained mid-19th century stonework and the surrounding historic neighborhoods. Football fans can see the Pirates square off against competing university teams in the fall. For those who come to Georgetown for its vibrant arts community, the Sarofim School of Fine Arts is an excellent place to find art exhibitions, concerts, and theatre performances by talented Southwestern students.

Cemetery, Museum
Facebook
Email
Twitter
Pinterest
Copy link
Share
Residents and tourists who wish to learn more about the county’s history are encouraged to visit the Williamson Museum, which features interactive tours and educational exhibits designed to give visitors a look at the area’s past free of charge. The museum presents many programs and events outside of its historic walls, such as the free tours of the Williamson County Courthouse, Chisholm Trail Days and Civil War cemetery tours. Tickets for the latter two events can be purchased for a nominal fee from the museum.
Give us feedback