During segregation, black high school football teams in Texas were virtually ignored, despite their incredible levels of success. Now, a new book is finally helping give them the recognition that they deserve.

The term ‘Friday night lights’ refers to game day during the football season. Traditionally, high school games are played at the end of the working week, where an expectant and demanding local crowd see whether their potential teen heroes can live up to the hype. Can a nervous 17-year-old running-back perform under ‘Friday night lights’.

In Texas, football is king. It ranks a very close second to God, and, in an area as big as the Lone Star State, where there are just two NFL teams, allegiances tend to run deeper when it comes to college and high school teams. Why follow some overpaid millionaires 500 miles away when you have homegrown idols down the road that you can bump into at the diner after game day?

To get an understanding of just how big high school football is in this part of the world, the 12,000-seat Legacy Stadium in Katy – a city just west of Houston – cost $72 million to build. In an average Texan town, the high school football team will be the focal point. The players, despite their age, are treated – for better or worse – like professional athletes, whether that be in how they are treated day-to-day or how their performances are scrutinised in the local, sometime national, media.

The famous term was also the title of H.G. Bissinger’s exceptional book (Friday Night Lights: A Town, a Team, and a Dream), in which he followed the fortunes of a high school football team in Odessa, Texas, for a season in the late 1980s. It was a turned into a film, and subsequently turned into a ludicrously successful TV series.

While high school football is ingrained into the very fabric of southern American culture, to outsiders –especially outside of the US altogether – it takes on a bafflingly, but intoxicating, quality. It is so far removed from English school sport, with its big budgets, big pressure and big reward, that it’s almost impossible to not be fascinated by. Despite football’s importance in Texas for over a century, a new book highlights the fact that some of the state’s best players, coaches and most successful teams have been almost completely ignored, with next to no records, statistics or celebration of their achievements because, according to one Texan footballer: ‘Friday night lights? That’s white folks.’

Thursday Night Lights: The Story of Black High School Football in Texas, by Michael Hurd, tells the relatively unknown, but incredible, story of African American high school football in Texas. In a country under segregation, where each Texan town would have had black schools and white schools, Friday football was reserved for white people. Towns across the state would see most residents and local media head to the football stadium, assuming you were white, of course. Schools shared stadia, and while white schools got Friday’s prime time weekly slot, black schools would play midweek, on either Wednesdays or Thursdays.

Black people were not allowed to attend white games. White people were allowed to watch black games, but it in a great many cases it would be standing room only, given the entertainment and quality that was on show. The Thanksgiving game between Jack Yates and Wheatley would draw 40,000 fans. For years it was the largest high school event in the country. These schools, players and coaches weren’t just good, they were the best. 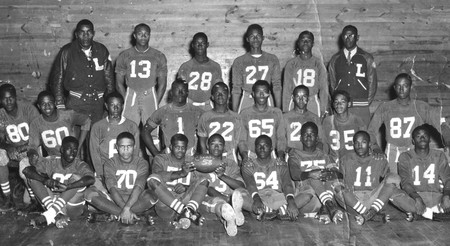 Speaking at the Texas Book Festival, author Michael Hurd said: ‘If you were black you weren’t allowed to attend white games. You had to stand outside the fence or climb a tree to see over. There was some acknowledgement of black football, because some white fans would go to watch black high school games, but there was no interest from the media. When I was doing research it was very difficult to find records because the media simply didn’t cover it. Local African-American papers would cover it, but that would be it.’

The book covers 50 years, from 1920 to 1970, helping give those associated with the PVIL (the African-American counterpart of the University Interscholastic League) the recognition that they deserve. The likes of Coach Andrew ‘Pat’ Patterson, Otis Taylor, ‘Mean’ Joe Greene and Dick ‘Night Train’ Lane are discussed with ex-players and fans mainly through extensive interviewing due to the lack of media coverage.

Hurd explains: ‘I grew up with the guys I talk about in this book. The people I knew about, the players, the coaches, the schools. Friday night lights had no relevance to me at all, I didn’t know what it was. Mainstream media didn’t talk about these guys, and yet as they go on in their careers they become big-time college players, Pro Football Hall of Famers and NFL players.’

To provide some context in just how under the radar some of these greats went, coach Patterson, mentioned above, won four state football championships during his career. When he wasn’t coaching football, he lent his hand to baseball and basketball. He won state championships in those as well, and yet in researching the book Hurd could only find a single newspaper cutting about him from a small local black paper based in Houston. 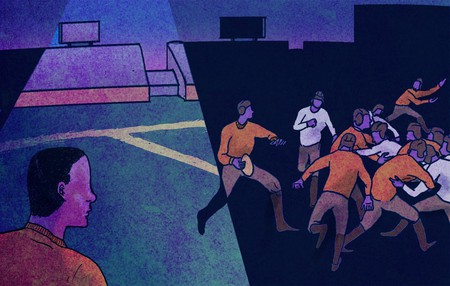 The UIL has provided the administration for almost all athletic, music, and academic contests for public schools in Texas since its inception in 1910. Segregation meant that the UIL worked on behalf of white schools only. Ten years after the UIL was formed, a group of black teachers got together to create the PVIL (named as such because Prairie View was where they met), but it was originally just for track and field. Football and basketball soon followed suit and right up until integration in the late 1960s the PVIL administered some of the country’s most successful football programmes.

When segregation began to diminish, as positive a step as it was, it once again highlighted the inequality and disparity between black and white. Hurd says: ‘In 1967 the UIL and the PVIL began to merge, but it would be wrong to call it a merger, it was a hostile takeover. White students didn’t attend black schools, black people got bussed to white schools. At its peak the PVIL had 500 member schools in the state, all but eight of those black schools vanished. They get demolished. Incredible coaches and teachers at black schools lost their jobs. They retired, or changed profession, essentially because they got pushed out. Today, there are just the eight schools from the PVIL, they’re the only legacy left and they’re likely to close soon.’ 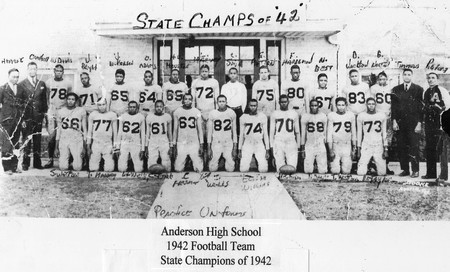 In the first six seasons of the PVIL’s structured playoffs, William Pigford led Anderson to the 2A state finals three times, winning in 1942 | © Texas University Press

It wasn’t just the schools. Along with the building themselves, all the PVIL trophies, titles, rings, plaques, uniforms and memorabilia got taken to the dump. They had to start from scratch. Incredible pieces of history literally thrown away. The UIL records, of course, remained.

Integration wasn’t a straightforward process. Across the United States there was plenty of disdain and anger at what was happening. The schools that began to integrate had to deal with unrest from white families, but there were a select group of whites who were particularly excited about black students being absorbed into the white school system, and that was the white football coaches. Suddenly, this pool of black players were at their disposal.

‘The white coaches secretly salivated about having this black talent,’ says Hurd. ‘The speed, the power, the athleticism. All of a sudden you could infuse this talent and play a new brand of football. Whatever the rules were about segregation there were a lot of coaches who were delighted. In meetings with one another you would hear coaches say to one another “I got me one”, referring to a quality black player. The opposite end of the spectrum is that black coaches were disrespected, they were looked down upon.’

Thursday Night Lights is not simply a football book, it goes far beyond that. Hurd’s painstaking research has produced an a wide-ranging account of what life was like for black people in Texas in the first half of the 21st century, the time spent on the football field just makes up a small part of that. Hurd himself describes it by saying: ‘I trace black history in Texas. I chronicle what that era was like, specifically what it was like for black people to get education, how people decided whether they deserved to be educated. It’s a sport book, with a large dose of black history.’

Hurd continues to highlight the incredible achievements of the PVIL, regularly meeting with those that contributed to the book. Today, the Prairie View Interscholastic League Coaches Association (PVILCA), made up of former PVIL athletes and coaches, honours the alumni who helped shape some the most impressive high school sides Texas has ever produced, and the University of Texas runs a community centre filled with PVIL memorabilia. This group of individuals have taken it upon themselves to celebrate the outstanding athletic ability that black Texans produced and enjoyed, away from prejudiced eyes.

In 2018 anyone and everyone has a chance to experience Friday night lights, regardless of ethnicity. Texas (like a great many other places around the globe) may not be perfect in terms of race relations, but at least powerful, skilled, intelligent young footballers can get the accolades that they deserve, rather than being hidden away into the darkness. 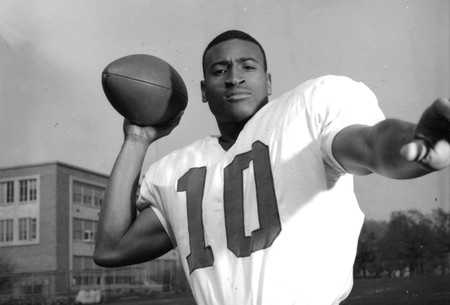