The World's Largest Commercial Pizza is Now Available for Order 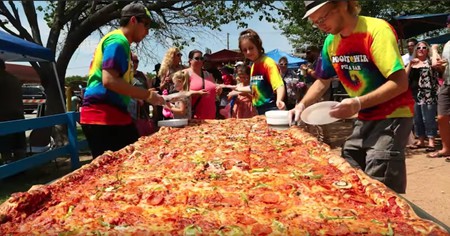 In the state where the motto claims “Everything’s bigger in Texas,” there is new empirical evidence that this phenomenon is real. Naturally, this proof comes in the form of a pizza that is basically the size of your living room carpet.

In the little town of Burleson, Texas, Moontower Pizza Bar recently claimed the title for the largest commercially available pizza with its 8′ by 2′ 8″ behemoth pie. Named “The Bus” in honor of the unbelievable quantity of dough and toppings required for its assembly, this pizza is fit for a party. Not surprisingly, the price tag reflects the truckload of ingredients required to assemble an order. It also suggests that this pie is not meant to be consumed by an individual.

Ringing up at $299.95 (plus tax), this pizza needs to be ordered 48 hours in advance and only comes with one topping. The good news is that it can be ordered for delivery so as not to interrupt your festivities. Although we will argue that trying to get this pie through the door may become the evening’s entertainment.

Even though the thought of a single-topping pizza may be slightly depressing, you may not want to add any more to this ginormous pizza. Already, the quantity of ingredients used is staggering. The creator of this masterpiece, Claire Stephens, described her version of The Bus that she prepared for the award ceremony for the Guinness World Records: “Right before rolling it into the oven, over ten pounds of cheese and toppings were added.”

Even more impressive than its size, this pizza is created with scratch-made dough and sauce and only takes 30 minutes to bake. This impressive 1.98m² (21 ft² x 48 in²) feat is now the heavyweight champion in America, as its award just dethroned Big Mama’s & Papa’s Pizzeria in Los Angeles which has held the title since 2010.

A testament to American drive and ingenuity, everyone is going to want to get in on a slice. Just make sure that when you order The Bus, you are very, very hungry.