Franklin Barbecue | © The Austinot / Flickr
First things first — it’s hard to go wrong when picking a barbecue spot in Austin to get your fix of smoked meats, homey sides, and desserts just like your grandmother used to make. Regardless, here’s a list of 10 barbecue spots in the Texas capital to get you started on one very delicious journey.

Food Truck, Restaurant, $$$
<a href="https://www.flickr.com/photos/colleenmorgan/14070210103/in/photolist-7tVk6y-nrkvgn-QxkhXc-rbtGpR-oKjUa5-MRcVBK-7tRpbi">Micklethwait Craft Meats | Micklethwait Craft Meats | © Colleen Morgan / Flickr
The proof is in the name: Micklethwait Craft Meats has noteworthy meats on lock. Every menu item is prepared in-house, from the meat to the bread to the desserts and even the condiments. While the changing sausages are the most popular menu item, the idiosyncratic lemon-poppy seed coleslaw, pulled goat, brisket Frito chili pie and jalapeño cheese grits are also amazing and unique finds. 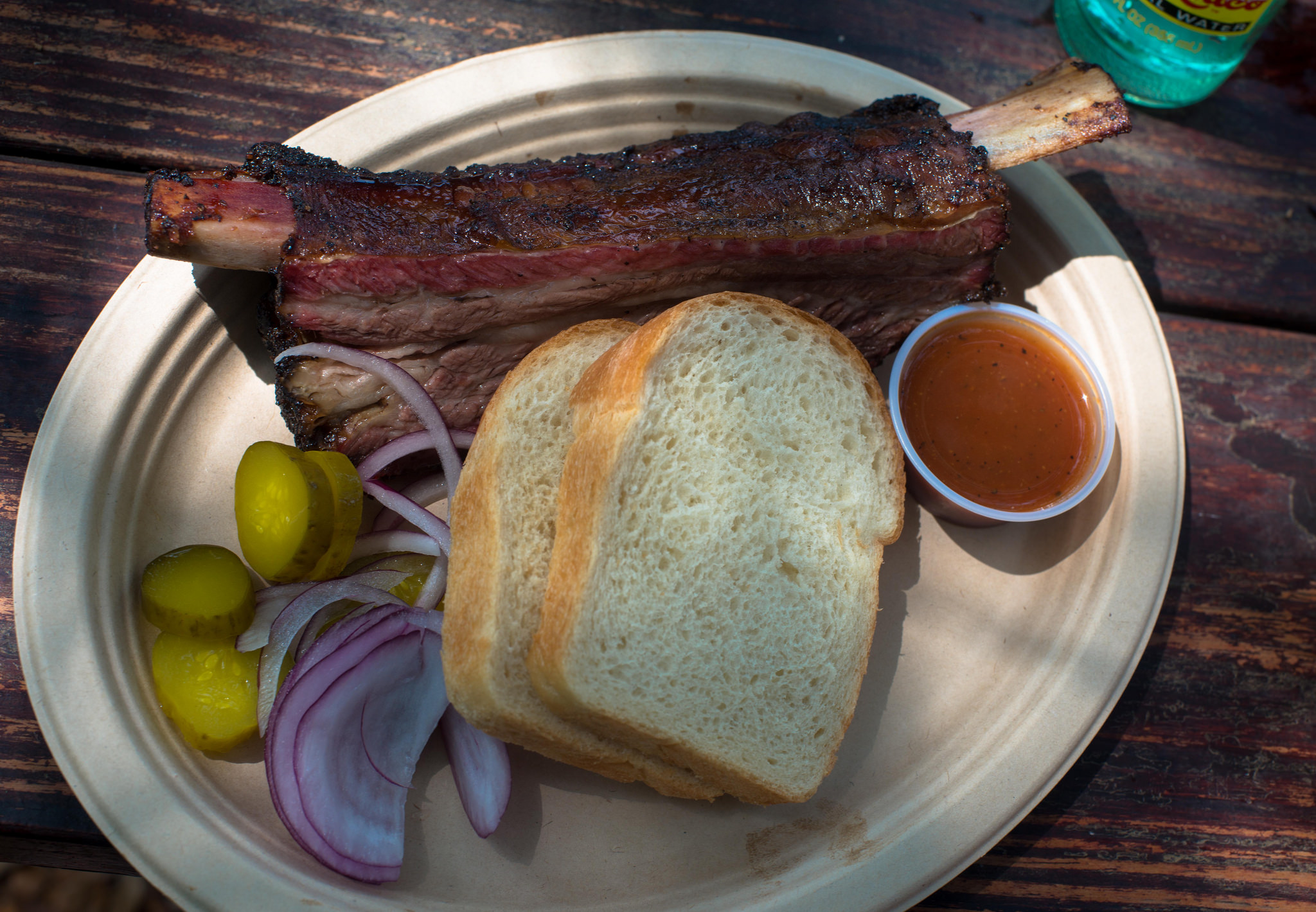 Restaurant, Food Truck, $$$
Courtesy of Valentina's Tex-Mex BBQ
What is better than barbecue? A trailer that hosts one-of-a-kind dishes where Tex-Mex and barbecue seamlessly and deliciously collide. Valentina’s has the best of both worlds and has the long lines to prove it. It will soon open its first brick-and-mortar spot, but will still offer the same favorites as it currently does from its trailer, including smoked brisket tacos and barbecue-laden breakfast tacos.
More Info
Open In Google Maps
11500 Manchaca Road, Austin, Texas, 78748, USA
+15122214248
Visit website

Restaurant, $$$
Courtesy of Oakwood BBQ
Oakwood BBQ hasn’t been open long, but it’s already making waves as one of North Austin’s best spots for smoked meats and innovative sides. Their brisket is to die for, and the business has plans to build a stage for live music in the backyard. Oakwood also has unique items you won’t find elsewhere, such as the paradise pie with pineapples and graham-cracker crust, and specials like the pulled pork baked potato, as seen below.

Opening hours: They’re closed on Mondays, but for the rest of the week they’re open from 11am till they sell out for the day.

Food Truck, BBQ, $$$
Kerlin BBQ is a no-frills joint that has seen success by keeping it simple, yet special. This spot boasts notable side dishes such as the blue cheese coleslaw and smoked corn on the cob with chipotle butter and queso fresco. They are only open a few days a week until they run out, so plan ahead, or make sure you get your share by pre-ordering.
More Info
Open In Google Maps
2209 East Cesar Chavez Street, Holly, Austin, Texas, 78702, USA
+15124125588
Visit website
Visit Facebook page

Food Truck, $$$
Courtesy of Brown's Bar-B-Que
What better way to cap off a day of drinking than with some barbecue located right next door to the bar? Grab a few beers at Corner Bar, and then venture to Brown’s Bar-B-Que for meat served just about any way you like it: on a sandwich, wrap, with sides, or by the pound. Don’t forget a side of the creamy mac-and-cheese to complete one hearty meal — without the wait of similar trailers of this caliber.
More Info
Open In Google Maps
1901 South Lamar Boulevard, Zilker, Austin, Texas, 78704, USA
+15125178520
Visit website

Food Truck, $$$
You can’t miss this proud trailer from the road, with a huge Texan flag painted over the entirety of the small but mighty eaterie. The pork belly sandwich and chopped brisket sandwiches are tender and moist, but make sure you leave room for dessert. It may seem strange for a barbecue joint, but the banana pudding is the menu item you would regret not having the most.
Permanently closed
More Info
Open In Google Maps
2323 S. Lamar Boulevard, Austin, Texas, 78704, USA
+15127394724
Visit website

Restaurant, $$$
<a href="https://www.flickr.com/photos/markcph/4448336804/in/photolist-7M5Ty9-ph91dv-7M1Tqa-aqn55d-aqjoen-7LSHSA-9uYf2v-gWtaP7-gWtm1Z-aqn4Yq-gWueCz-gWt4rW-aqn4xS-gWtaAR-8ACj5r-aqjq6R-nTY2ei-aqjosR-aqn4iL-aqn4t3-aqjpvc-9A3eBt-nBMupK-aqn4b7-8ACiBH-ezRi4g-8AFotL-8ACjNe-gWu3ct-b4WCaB-9A6cZU-a5NE7Q-af9AdG-nUgaY2-nU8FQE-aqn5F7-twY6mM-rBeAQK-rzn7v2-dVrw8u-e6GKk6-rB6Lh5-rRoUCd-rB88nS-rTFVuX-rBeAbP-4Tupb9-adUSNH-aqjjSV-7kXyP9">Franklin BBQ | Franklin BBQ | © Mark Jensen / Flickr
Yes, Franklin Barbecue does make every Austin barbecue list, but there’s a reason people line up by 8 a.m. every morning in hopes of snagging a few pounds for themselves. Even former President Obama has made a stop here, though he was lucky enough to skip the infamous line. You’re not going to eat any Franklin Barbecue without earning it, and for that reason, try everything. The closing time of 3 p.m. is more of an estimate; they serve food until they run out, and it’s often earlier than that time. 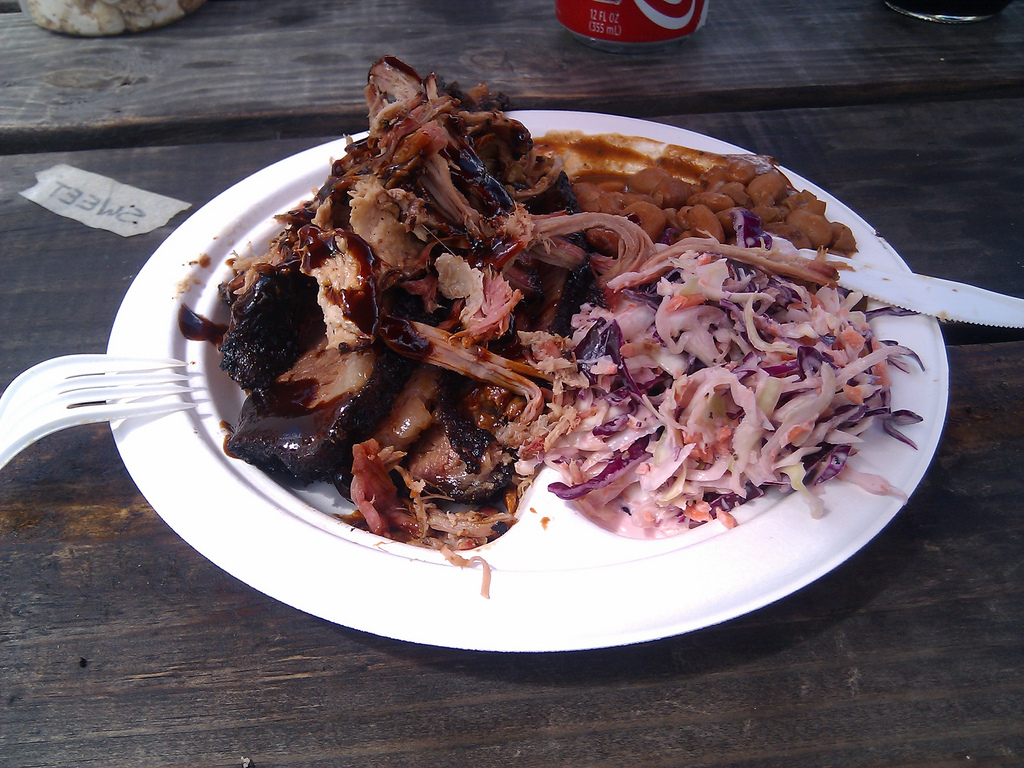 Restaurant, $$$
<a href="https://www.flickr.com/photos/bcgrote/3441284606/in/photolist-6f6u2d-9Vkpam-9hnTh5-8nY357-7M1HSa-4K4t1L-btkF7q-9YGv9R-ujkkHb-vgEGJt-uYLAGA-5Djk51-9YKfQ7-7SPTRF-j4mmb-5DjjvW-5Df2gi-9hnXjC-9YKNeL-7dumJJ-2RmCcf-nSz3E1-8nXRGJ-9YLa9b-9MAWS9-rEzZGR-8d1vXh-9Vkre5-69Q9Z2-7duk1A-9YKCTU-ayR6nG-c1Z2M-69QaDv-5DjkeN-6AxT8N-9VhzA6-5Df3np-8nUFSt-9YKrK9-9VkmVU-9Vkmzj-9YLCMN-5DjibS-roeVXa-5DjjZL-ro97A7-9YLGj1-5Df29B-btksdu">Black's BBQ | Black's BBQ | © BCgrote / Flickr
Warm wood interiors and even warmer stacks of ribs, brisket, and sausage await you at Black’s BBQ. The Black family has been serving up barbecue made with the same simple rub and smoking strategy for three generations, just as their ancestor did at the original (and still operating) Black’s BBQ in Lockhart in the 1930s. Be sure to try one of the hand-stuffed jalapeño cheddar sausages. 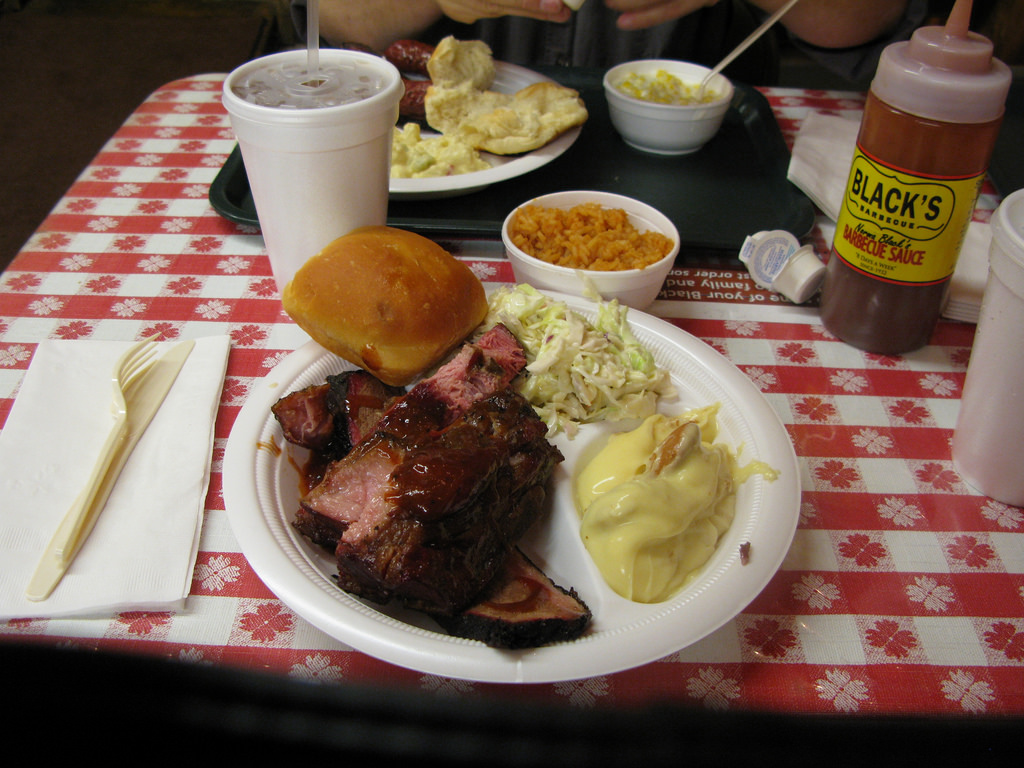 Food Truck, Restaurant, $$$
<a href="https://www.flickr.com/photos/criminalintent/15864172378/in/photolist-qqHRts-qaS2Kq">La Barbecue | La Barbecue | © Lars Plougmann / Flickr
La Barbecue is one of the most famous barbecue spots in Austin, and they deserve the title; the brisket with housemade pickles are king. Don’t have time to wait in line? La Barbecue accepts pre-orders five days in advance. This spot is so popular that they have decided to expand to the West Coast; Californians will be able to get their fix in Los Angeles soon. 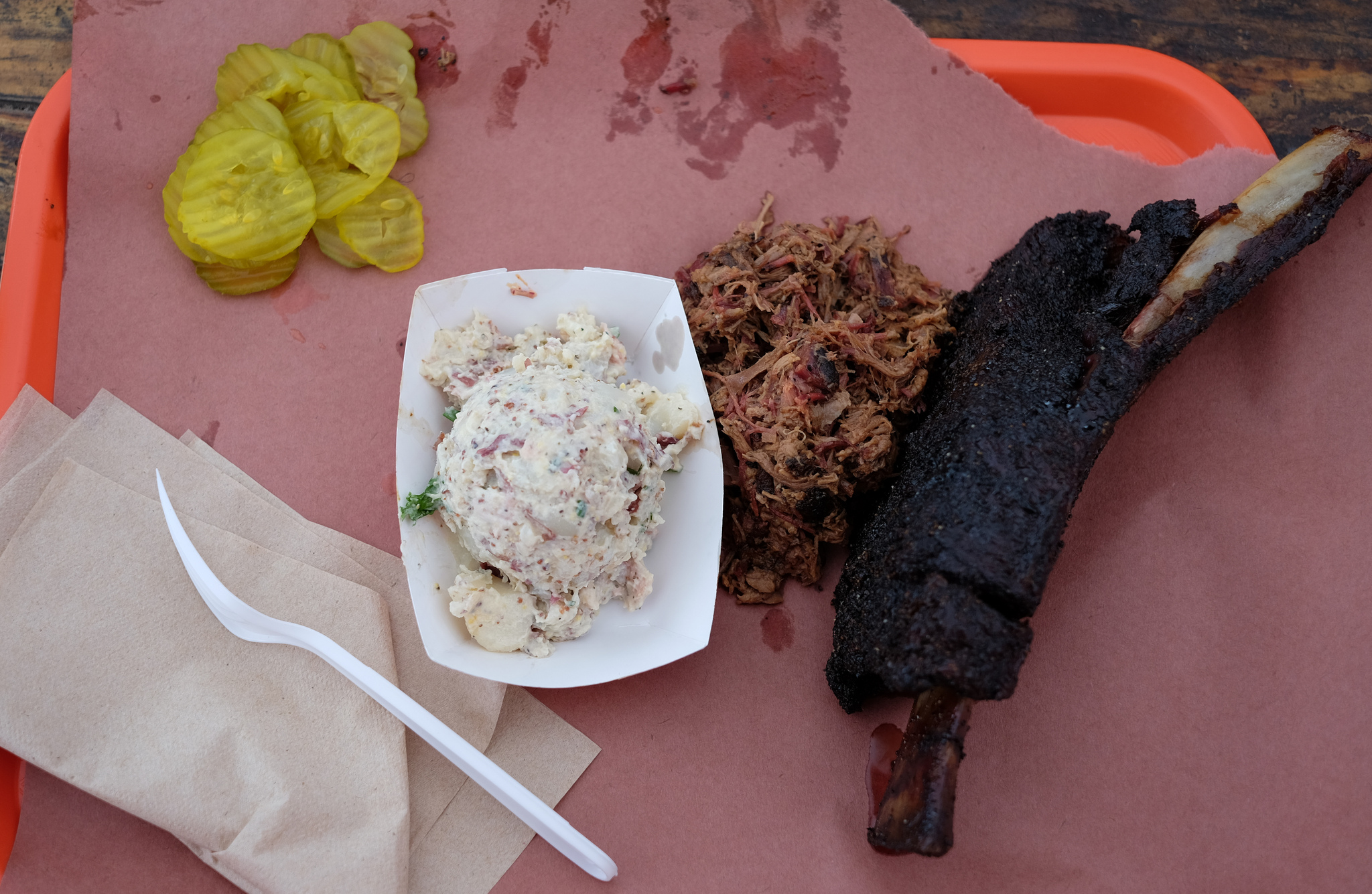 Hoover’s Cooking is not only a barbecue haven, but it also serves up top-notch Southern, Tex-Mex, and Cajun food. Owner Hoover Alexander is a fifth-generation Texan and native Austinite who seeks to bring people together and utilize local ingredients in his food. There’s no shortage of spicy meat to sample here, but the homestyle sides deserve the majority of the praise. 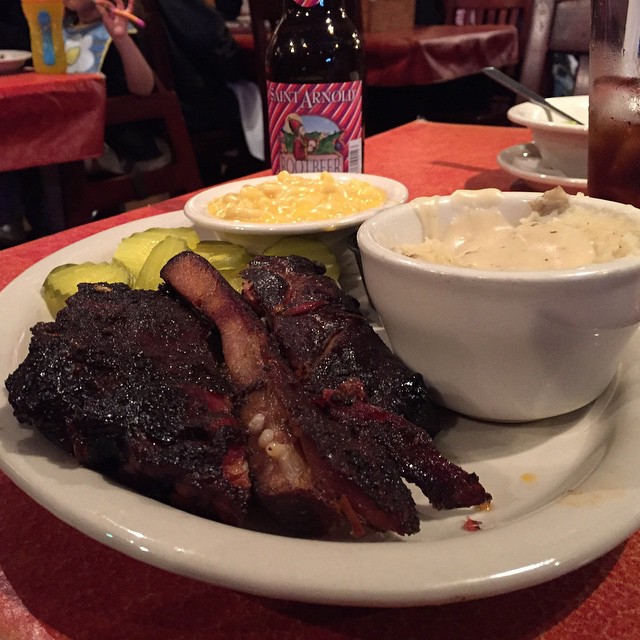