The Story Behind the Frozen Margarita 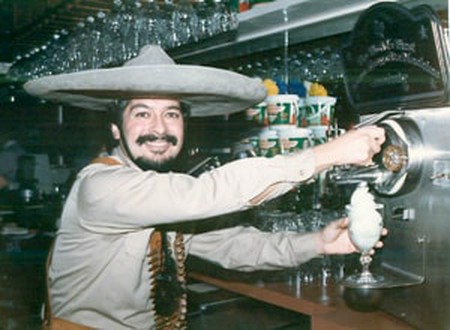 In Texas, where summers scorch beyond 100 degrees Fahrenheit (37 degrees Celsius), frozen drinks have become a staple, and the frozen margarita is no different, especially since this crowd favorite has a significant role in Texas history. The story of the frozen margarita begins in Dallas, Texas, at Mariano’s Hacienda.

Mariano Martinez was a high school dropout who used $500 and a small business loan to open his own Mexican restaurant in East Dallas called Mariano’s Hacienda. In 1971, frozen margaritas had been popular throughout the United States since the 1950s, but to make the drink, bartenders had the time-consuming task of creating it in a blender, making it difficult to reproduce the same flavor each time. This was exactly the case at Mariano’s Hacienda, and Martinez wanted to fix it.

Martinez looked for a solution and found inspiration in the 7-Eleven Slurpee machine. He realized he needed a similar machine that could make frozen margaritas, quickly, efficiently, and tastily. With his friend Frank Adams, the two men reworked an old soft-serve ice cream machine, and consulted chemist John Hogan on how to best adjust Martinez’s father’s margarita recipe so that it would work with the machine. Soon enough, the first frozen margarita machine was born.

There's still time to vote! Our very own Mariano Martinez has been nominated by @d_magazine as one of the greatest Dallasites in history for his role in shaking up the future of Tex-Mex. you can vote for Mariano here: http://interactive.dmagazine.com/competitors/mariano-martinez/

Sadly, Martinez couldn’t patent the machine and others quickly followed his suit, building their own machines around the country. Today, Mariano’s Hacienda still thrives in Dallas, continuing their tradition of selling frozen margaritas. For margarita fans who want to see the original frozen margarita machine, it can be found at the Smithsonian National Museum of American History.

While Martinez couldn’t patent the machine and make millions, his name lives on as the father of the frozen margarita machine, and to that, we toast (with a frozen margarita, of course) to him.