The Museum of the Weird, Texas

We all like discovering something strange, so the Museum of the Weird could be just the place for you to visit if oddities are your thing. What lies in wait when you step through the doors of this must-see attraction? 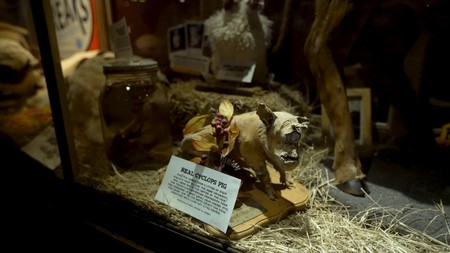 Discover a world of the unexplained in this exhibition of the bizarre in Austin, Texas. The Museum of the Weird is a popular tourist institution that welcomes you to a world of weirdness. From the pirate-themed courtyard (which includes a small apartment once occupied by none other than Hollywood royalty Johnny Depp) to a creepy onsite wax museum featuring Dracula, The Wolfman, The Phantom of the Opera, and other movie monsters lurking in the shadows, the Museum of the Weird is sure to have something in its collection to pique your interest.

Where is the Museum of the Weird located?

Austin, Texas is the home of the Museum of the Weird. You can find it at 412 E 6th St, Austin, TX 78701, United States. It’s open until late seven days a week, so it’s well worth a stopover if you’re looking for a scary and different activity to do in the evenings.

What can I find inside the Museum of the Weird?

Dubbed America’s strangest attraction, the Museum of the Weird certainly has a lot of oddities to discover. Packed full of incredible sights and sounds, there’s definitely going to be something to seek out and amaze your friends with.

Opened in 2005, Lucky Lizard Curios & Gifts was a shop in the heart of the Sixth Street entertainment district in downtown Austin. Owners Steve and Veronica Busti soon decided to convert an unused section in the back of the shop to become a showcase for some unusual trinkets and items from his inventory. Starting out selling these items, Steve soon realized that the real treasure would be to amass a big collection all housed in one area, and not sell it off. Enter the Museum of the Weird, which opened in 2007 as an homage to the dime museums and cabinets of curiosities that were once so popular across America.

The Museum of the Weird includes such curiosities as authentic freak animals, real mummies, fiji mermaids, shrunken heads and life-size wax figures of historic sideshow celebrities (including classic movie monsters). The world of the paranormal is also covered, including haunted artifacts and a Chamber of Horrors that includes some familiar faces.

Steve Busti – a man who has dedicated his life to his passion for all things odd – is the owner of the Museum of the Weird.

“My main goal with the museum is to get people to open their minds about the possibilities of what could exist in the world. You know, I’m interested in exploring the unknown and the unexplained mysteries, and I want to share that wonder with the public,” says Busti.

The bizarre items on display were either found by Busti himself, or were donated to him by people who wanted to share something strange with the world.

“I tried to keep that spirit of ‘keep Austin weird’ alive. We’ve got such a big collection that people know about the museum, and they just bring stuff in to me or will contact me if I’m interested in adding some new exhibits for the museum.”

Why are we so obsessed with the world of the strange?

From cautionary tales of old, to new and exciting ways of discovering the stranger side of life, we have always been intrigued with the idea of weird things and unexplainable phenomena. Trying to make sense of the strange is in our DNA, and people have become increasingly curious in recent years.

The X-Files TV show in the mid-90s rekindled a mainstream love of oddities and the notion of “I Want to Believe” (the alien poster slogan that adorned Fox Mulder’s office wall) is still popular. We also love a good scare, with the more frightening side of life always fascinating to those that live within the realms of possibility.

Don’t be a stranger to this homegrown collection of all things strange, and make sure you visit the Museum of the Weird in Austin, Texas when you are in town. You might just find something extraordinary.