The Lillie And Hugh Roy Cullen Sculpture Garden: An Urban Oasis Of Art 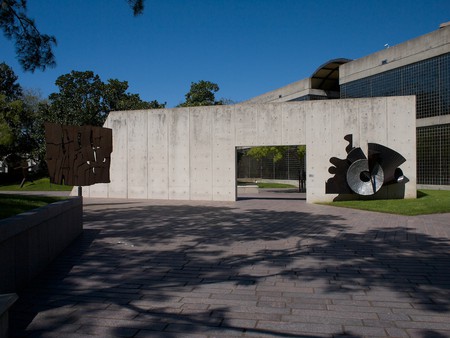 Situated in the middle of Houston’s Museum District on the grounds of the Museum of Fine Art Houston (MFAH), lies a hidden oasis. The Lillie and Hugh Roy Cullen Sculpture Garden is a truly unique space where art and nature work together to please the senses. Nature and sculpture are paired in unexpected and beautiful combinations: Drummon Red Maples with Louise Bourgeois; Drake Elms with Auguste Rodin, Giant Timber Bamboo with Henri Matisse; and Asian Jasmine with David Smith. 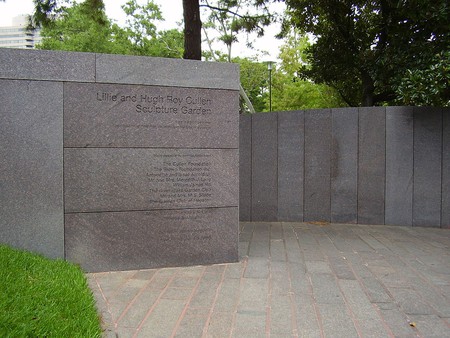 The men behind the vision are sculptor Isamu Noguchi and architect Mies van der Rohe. Rohe’s stunning employment of sleek design is showcased throughout the grounds of the MFAH and is done justice by Nogochi’s clever curation. Noguchi, who began his career assisting Gutzon Borglum in the carving of Mount Rushmore, initially foresaw the garden as an island in the literal sense, but the the logistics of building a moat prevented it. Instead, a walll was built to block out the distracting sites and sounds of the surrounding city. As one enters the Lillie and Hugh Roy Cullen Sculpture Garden, all else falls away away, creating an island-like atmosphere.

Completed in 1986, the design of the garden was particularly innovative within landscape tradition at the time. In contrast to gardens of the Italian Renaissance or the English tradition, Noguchi was attracted to Modernist gardens that sought to use sculpture to contrast with natural forms. Noguchi, refusing to be limited by the natural contours of the earth, placed sculptures and vegetation in such that it feels both striking and harmonious. Noguchi called the garden ‘a sculpture for sculpture’ which is also the title of a fascinating book that was released in 2006 to commemorate the 20th anniversary of the garden.

The diversity of sculpture means that a walk through the garden also doubles as an art history lesson. From the beginnings of modernism to the playfulness of surrealism to abstraction and post-modernism, the journey is varied and the changing aesthetics give visitors much to ponder. Here are four notable sculptures one can expect to find on the grounds.

Depicting a headless and armless St. John, exuding strength and physicality, there is nothing static about this statue. Auguste Rodin skillfully forged the body of a man who appears as though he might be transported at any moment by means of a powerful stride. Poet Carl Sandburg wrote of Rodin’s sculpture, ‘you make us proud of our legs, old man.’ 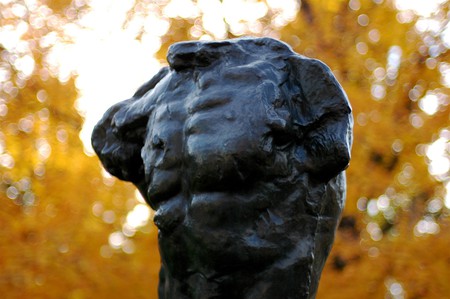 Louise Bourgeois’s Quarantania I is a surrealist representation of the isolation and angst she experienced growing up. Her family relationships were fraught with tension, created when her father brought home a mistress in the guise of a young English tutor and kept her in the family home for ten years. Looking at this sculpture it is hard not to experience the anxieties that Bourgeois has skillfully cast into bronze.

Initially a mechanical engineer, Alexander Calder had his artistic epiphany while working as a fireman on a ship. The shapes he encountered there created connections in his mind that reminded him of stars and the planets and he promptly moved to New York and enrolled in art school. In The Crab, Calder’s knowledge of mechanics combine with a joyous love of aesthetics. It is bright, bold and at the right time of day the surrounding vegetation casts dappled shadows across its painted steel body.

The connection between art and nature is no more explicit than in Linda Ridgway’s, The Dance which was cast from a grapevine that grew in her own backyard. Positioned as though it is freely crawling up the wall, this sculpture serves as a reminder that art can be natural in the same way that nature can be art. Here Ridgway has articulated the trend of imitation of the organic that occurred in the 1980s and 1990s in such ideal surroundings that it is hard to imagine this sculpture existing anywhere else.