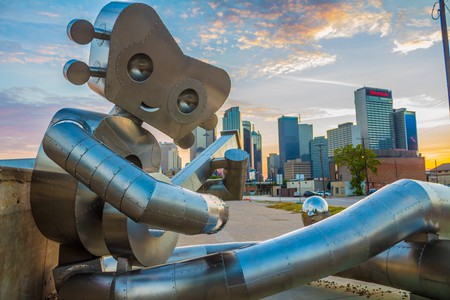 There’s a popular Dallas folktale that goes like this:

An old locomotive lay buried beneath an elm tree, until one night a splash of gin spilled onto the roots, giving life to the locomotive. The locomotive transformed into a robot, emerging from the ground where three birds stood. Once above ground, he sat, guitar in hand, waiting on a train. Eventually, he grew restless enough that he stood tall with his avian friends and began walking toward the rail line. He is the Traveling Man.

While most folktales arise from local lore, this particular tale was inspired by art. In September of 2009, the Deep Ellum Rail Station, near downtown Dallas, opened in connection with a $1.4 (£1.01) million sculpture series called The Traveling Man. Brad Oldham, Brandon Oldenburg, and Reel FX Creative Studios were the creative minds behind The Traveling Man, a three-part series featuring a giant robot and his bird friends.

The folktale represents three different parts of the sculptures. There’s Awakening, which displays the Traveling Man’s head emerging from the ground, surrounded by three birds. At Waiting on a Train, Traveling Man sits on the ground waiting with a guitar in his hand, a smile on his face, and his legs crossed in relaxation. Lastly, Walking Tall depicts the giant robot standing 38 feet (11.5 meters) tall with a bird on his wrist and others around his feet. He is walking toward the rail station, symbolizing the connection between Deep Ellum and the rail line. 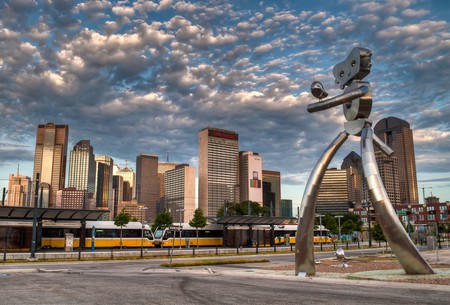 The Traveling Man is a fellow made of reflective structural steel with a head that’s shaped like the headstock of a guitar. The circular hole in his mid-section is meant to represent his acceptance of all people. The Traveling Man is always visible with LED lighting at night, delighting visitors that hop on and off the Deep Ellum Rail Station to explore the neighborhood.

The connection between The Traveling Man and the rail line has roots that go back to the 1800s. Deep Ellum was born of the railroad and arose as a cultural hot spot for the African American and immigrant communities. It was also a place for jazz and blues to flourish, giving greats like Bessie Smith and Huddie “Lead Belly” Ledbetter a stage to share their talents.

Today, Deep Ellum is the artistic soul of Dallas, filled with live music venues, galleries, artistic murals, and hip restaurants. The Traveling Man is the mascot of Deep Ellum, greeting new and old visitors alike. Locals are fond of their brother, who stands tall against the Dallas skyline, reminding the world of the importance of art and story, and how they intersect in this metropolitan city. 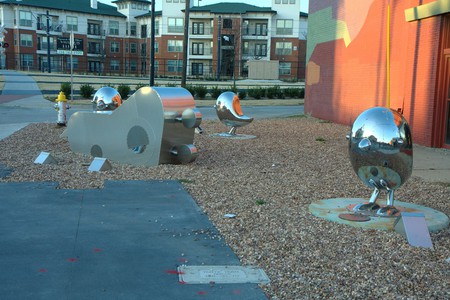