Marfa Is The Biggest Little Town In Texas

Speeding along a road as flat as it is straight, you roll down the window and let the warm air surge in. Looking up, you see a clear blue sky that stretches out endlessly across a barren desert that goes on for miles in all directions. Here, your perception of proportions is skewed. Things aren’t this big. The world isn’t this empty. Your scale is thrown off. Everything is bigger. Welcome to Marfa, Texas. 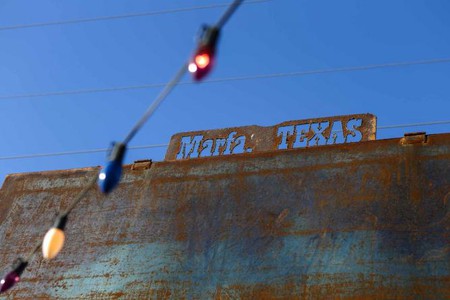 Out in west Texas, along Highway 90, just 60 miles from the Mexican border, you’ll find the tiny town of Marfa. The official population is 2,010, and the official size just 1.6 square miles. Marfa is a blip on the unending Texas landscape. There are many things that set Marfa apart, but it’s founding is not one of them. Set up as a railroad water stop in the early 1880s, it functioned as little else until the 1920s. When World War II broke out, the U.S. government constructed the massive Marfa Army Air Field, where thousands of pilots trained by flying in the vast sky over limitless desert. After the war, the military installations were closed and the population once again dwindled. 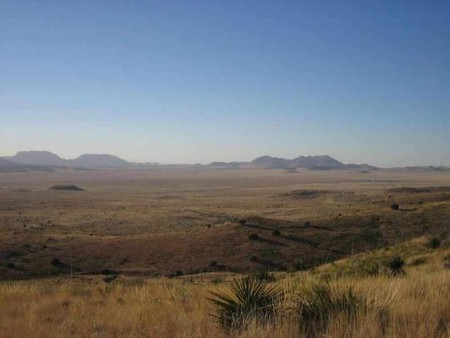 The first thing that set Marfa apart was the discovery of the Marfa Ghost Lights. The lights drew visitors attracted to the phenomenon, fueled by an article about them in a 1957 issue of Coronet magazine. On clear nights, between Marfa and the Paisano Pass, when one is facing southwest, brightly glowing basketball-sized spheres can be seen dancing across the foothills of the Chinati Mountains. The lights are mostly white and yellow, though other colors have been reported. The lights move slowly and laterally and often appear in groups. A 2004 study by University of Texas at Dallas physics students found that all of the lights were attributable to atmospheric reflections of automobile headlights passing along the nearby highway. 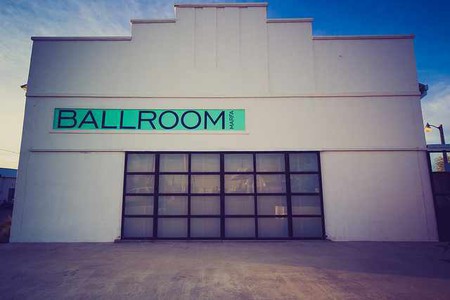 Marfa provides the kind of backdrop that movie makers dream of. The wide landscape of the Chihuahuan Desert fits the vast canvas of cinema projection perfectly. In 1956, James Dean’s last film, Giant, spent two months filming in Marfa. Dean played a rugged local handyman who strikes it rich when he finds oil in the barren sands surrounding Marfa. In August 2006, the expansive beauty of Marfa was once again put on display. Paul Thomas Anderson’s There Will Be Blood and the Coen Brothers’ No Country for Old Men were filmed in Marfa. Both films are based on acclaimed books by famous authors, Upton Sinclair’s novel Oil! and Cormac McCarthy’s No Country For Old Men, respectively. Production had to be shut down for a day on the Set of No Country for Old Men because of smoke clouds from filming on the set of There Will Be Blood.

The magic of Marfa was captured stunningly in both films, with gorgeous shots of the vast desolate landscape that engulfs Marfa. There is a minimalism to the area surrounding Marfa. The sky is so big, the desert so boundless, that it begins to feel like that’s all there is. 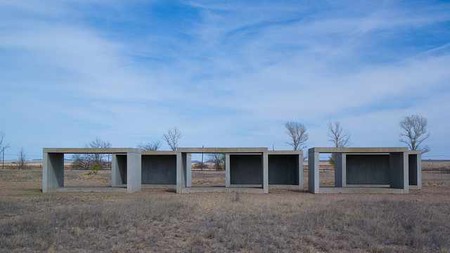 It was the minimalism of the barren, lonely landscape that drew famous minimalist artist Donald Judd to Marfa. After renting houses for a couple years, he purchased a large hangar with some smaller buildings and began to permanently install his art. Judd hated the prevailing practice of museums showing art for a short period of time before bringing in another exhibition. Judd believed that to truly understand the art and its context, the art had to be on permanent display. To do this, Judd acquired more and more property in the area, filling each new establishment with art. Judd eventually acquired the decommissioned Fort D.A. Russell, turning it into a sort of anti-museum, filling all of the old military installations with permanent displays from various artists. 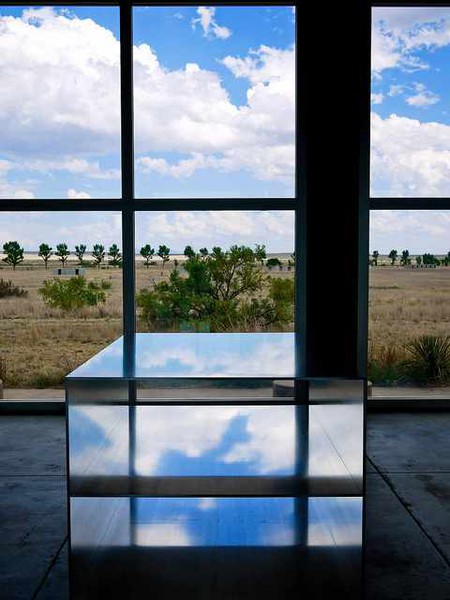 With so many art installations in such a small area, it’s easy to see why the area is so attractive to art tourists. The minimalist theme that Judd began continues to this day. The architecture of the town is simple yet striking. The main foundation overseeing Judd’s legacy is the Chinati Foundation, which occupies more than ten buildings at the site and has on permanent exhibit work by artists such as Ingólfur Arnarsson, Dan Flavin, and Claes Oldenburg. Every year, the Chinati Foundation holds an open house event where artists, collectors, and enthusiasts come from around the world to visit Marfa’s art. However, like so much of minimalist art, things are not always as simple as they appear. Brewing among the hot sands is a feud that threatens the foundation on which it’s built. 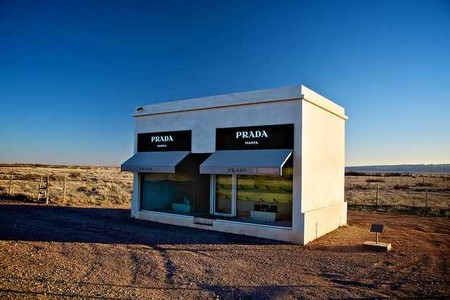 Prada Marfa, a sculpture designed to look like a Prada store | © Andy Price/Flickr

The push to preserve the work and legacy of Donald Judd has turned the city in on itself. Marfa is a city at the edge of the world – the last stop before nowhere. A peculiar air of uncertainty and possibility grips you in the midst of the expanse. All of that is threatened by the strict structure of preservation, pulling the curtain back on this magical city and rendering it victim to the same forces that many attractive cities face. Locals have seen the town shift and change throughout the years, as people from all over the art world travel to Marfa. Property values are skyrocketing. Family homesteads are now summer homes for the nouveau riche. Tourism is now the main industry.

Like all places infested with the tourism bug, Marfa is consuming itself, degrading a part of its original magic. Marfa has a simplicity to it. There’s big sky, endless desert, and little else. But nowadays much of Marfa is filled with iPhone-touting art tourists trying to subvert the ‘no pictures’ rule so they can get more likes on their Instagram. And yet, even with the rising rent, the imposition of gentrification, the self-consuming tourism, Marfa is still magic. 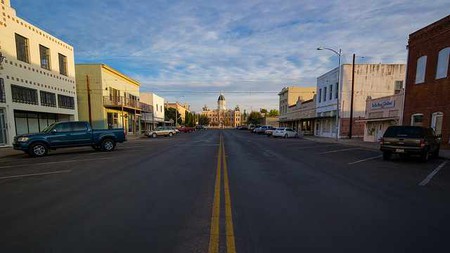 As you walk the bleak, concrete halls of a Judd installation, you are overtaken by something. It may be real, it may be bottled tourism – it’s likely a mix of both –, but something about the moment makes you take pause and reflect. The oddity and simplicity is striking in a way that deserves the attention of others. The feeling that fills you when you’re in Marfa is similar to the feeling an artist gets when facing a blank canvas. There is an abrupt lack, an emptiness that implores you to fill it. Marfa is both a literal and metaphorical sandbox. It’s no surprise that artists are drawn to the city. The beauty of Marfa is in its expanse. No matter how many tourists come and go, Marfa has room for them. No matter how big Marfa gets, it will always be a little town, because Marfa is dwarfed by the landscape that surrounds it. Marfa was founded as an outpost, a tiny dot of humanity in the enormous wilderness. Today, Marfa is still an outpost, a beautiful world of art and culture surrounded by boundless back country.