Best Sculpture Parks In Texas To Explore Art And Nature

Texas has a thriving contemporary art scene that collects world-wide talent and is often overlooked. As a burgeoning cultural hub, the artistry of Texas is spilling out onto the streets in the form of innovative street art and sculpture. We take a look at the best sculpture parks in the state. 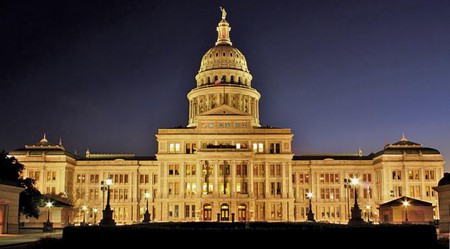 The Sculpture Ranch and Galleries

Located in 140 acres of hilly countryside The Sculpture Ranch and Galleries has a distinctly Mediterranean landscape. A ranch once owned by President Lyndon B Johnson, is now in the hands of Greg Sullivan and Tracy Poe who have dotted the hillside with sculptural trails, leading the visitor to a selection of works by national and international artists. Many of the artists whose works are shown here – including the Rhode Island figurative artist Walter Horak – were particularly drawn by the representative possibilities the landscape offers. Alongside the work of Horak, the living deer and longhorn which pepper the countryside are represented in shining metal, completing the otherworldly feeling of the scrub. The ranch is open Thursday through Sunday from noon until 6PM. Many of the weekends are accompanied by talks by local and international artists and much of the artwork seen is available for sale. 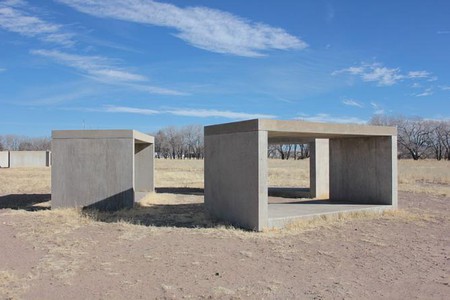 A contemporary art museum founded by the American minimalist Donald Judd, The Chinati Foundation’s ethos is founded on his own ideas of simplicity and the rejection of old, geometric forms. Built on a former military base, the site comprises 350 acres, collecting over 100 of Judd’s own works in addition to an installation by Dan Flavin and sculptures by John Chamberlain. The austere, almost brutal result is perfectly complimented by the grand Texas sky. As you might expect, the Chinati Foundation is a large site – it is not possible to see everything in one afternoon. Guided tours are available and indeed recommended, but potential visitors should know that these take upwards of six hours, including a two hour break for lunch. Reservations are highly recommended. 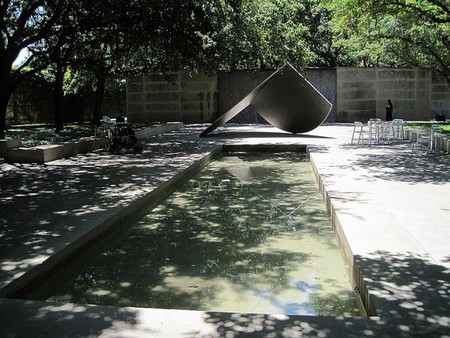 Originally designed by Ed Barnes in 1983, the small yet distinctive sculpture garden at the Dallas Museum of Art underwent renovation in 2012. Barnes himself said that ‘for us, setting a stage for art was as crucial as the pieces themselves’ and this is immediately evident to the visitor in the sharp limestone edges and cool reflective pools. Perhaps the most striking artwork featured in the area is ‘Ave’, by the American abstract expressionist sculptor, Mark Di Suvero. Like many of Suvero’s other works, Ave consists of several steels girders tied together. The effect is that the piece hovers between fragility and solidity, permanence and brevity. In the sculpture garden itself, one finds the similarly impressive softened metals of the ‘Dallas Snake’ by Mark Handforth, as well as several sculptures by the English Modernist Barbara Hepworth.

Museum
Facebook
Email
Twitter
Pinterest
Copy link
Share
Map View
Located right next to the Dallas Museum of Art, the Nasher Sculpture Center is an excellent addition to any visit. Named after the avid art collector Raymond Nasher, the museum and garden showcases the best of his staggering collection. This world-renowned collection was fought over by museums and galleries the world over, before Nasher finally settled on building his own museum and garden on the site of an old farm. Spread over a 2.4 acre site, the collection contains not only sculptures by Pablo Picasso and Alexander Calder, but also the striking versions of everyday objects by Claes Oldenburg. The Nasher is also an active center for public lectures, visiting artists and ongoing studies in conservation.

Museum, Park
Facebook
Email
Twitter
Pinterest
Copy link
Share
Map View
Created by the Japanese-American landscape architect and sculptor Isamu Noguchi, the Cullen Sculpture Garden is the tranquil home of the best of 20th and 21st century sculpture. Noguchi specially selected the plants and trees of the garden in order to best complement the sculptures planned to be exhibited. Even without the sculptures, the garden could easily be considered a work of art in its own right. As well as presenting more of Alexander Calder’s works, the park is also home to sculptures by Henri Matisse, Frank Stella, and Ellsworth Kelly, whose ‘Houston Triptych’ was created especially for Cullen Garden, exemplifying Kelly’s yearning for pure abstraction. Alongside these internationally famous names, the garden is also home to Texan home-grown talent Joseph Havel, whose art is famous for transforming mundane objects into poetic forms, is represented by ‘Exhaling Pearls’.

Building, Park
Facebook
Email
Twitter
Pinterest
Copy link
Share
Map View
The Menil building itself is only part of the vast art collection. While sculpture gardens provide an opportunity for the visitor to properly appreciate sculptures out of doors, they nevertheless risk being polluted by the secondary interpretations of gardeners and architects. Loreto Park however, challenges this. Many of its sculptures have been specially placed in the surrounding neighborhood of bungalows, streets and normal parks. These bungalows are not just administrative buildings – Texans work and live in these spaces. Parks, art, neighborhoods and sculpture are thus truly integrated and the result, while often messy, is a radical and ultimately successful attempt to put art back into the community. Children climb over and play alongside the knotted girders of Mark Di Suvero, the imposing blocks of Tony Smith and the earth gouges of Michael Heizer.
Give us feedback