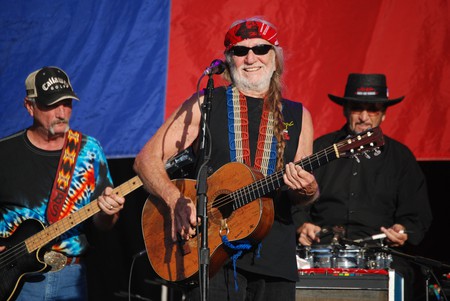 Texas country music, also known as “Red Dirt” country music, has its own unique style that differs from the pop country you hear on the radio. Get a taste of this distinctive style of country music that channels themes of outlaws and the “working man” with these 15 iconic songs.

George Strait, “All My Exes Live in Texas”

Perhaps the most iconic Texas country song, George Strait‘s “All My Exes Live In Texas” is now a widely known pop culture phenomenon, even snagging a reference in rap icon Drake’s “HYFR.” With a smirk, George explains that the only reason he now lives in Tennessee is to avoid his many voided lovers all around the Lone Star State.

Pat Green appreciates girls from all over the U.S., but claims that girls from Texas are “just a little bit better.” Pat started out his career playing small bars at Texas Tech before catching the eye of Willie Nelson.

This song directly calls out Texas country stars who went “mainstream Nashville,” a critique that many hold of Pat Green. This song hits close to home for Ray, whose first album was “Nashvillized” and made to sound more poppy, to his disapproval, and performed poorly. He quickly rebounded and is known today as one of Texas country’s greatest songwriters.

The Randy Rogers Band got their start in San Marcos, not too far from the city to which their hit “San Antone” pays tribute. You can catch them touring nearly nonstop around Texas as well as the entire U.S.

“Colorado‘s too cold…Oklahoma’s too rich” kicks off this ode to Cody Johnson‘s home sweet home state of Texas. The 29-year-old singer has already self-released six albums and has debuted on the Billboard charts multiple times despite being independent.

Kyle Park plays more than 175 shows, mostly in Texas, every year. His song “Anywhere in Texas” states why — he doesn’t even need to be in his hometown of Leander, but being anywhere in Texas is greater than anywhere else in the world.

Townes Van Zandt, “If I Needed You”

This simple but loving ballad from the 70s has transcended generations with its sweet lyrics like “you will miss the sunrise if you close your eyes, and that would break my heart in two.” “If I Needed You” is a typical Townes Van Zandt song, full of poetic tragedy and sadness. Townes lived a sad life himself, struggling with drug and alcohol addictions and bipolar disorder until his death in 1997.

Willie Nelson, “Roll Me Up and Smoke Me When I Die”

Willie Nelson is nearly as famous for his hefty marijuana intake as he is for his music. He is an activist for the legalization of marijuana, as well as a singer, songwriter, author, and actor. Many credit Willie as one of the first pioneers of “Red Dirt” country music.

“She’s Like Texas,” off of Josh Abbott Band‘s second album of the same name, compares the beauty of a woman to the various beauties you can find around the state of Texas: a free spirit like the wild growing bluebonnets, green eyes like the trees in Nacogdoches, and moody like the indecisive Lubbock weather.

Sometimes being an outlaw is easier than being an upstanding member of society. Joe Ely stands by the life of drinking, stealing, and other debaucheries in “Hard Livin,” in which he states, “I wish hard livin’ didn’t come so easy to me…”

“Easy Come, Easy Go” was one of Hayes Carll‘s first hits, off his debut album Flowers and Liquor. This contemplative ballad highlights how quickly life can change, and he credits his poetic style to one of his major influences: Townes Van Zandt.

Casey Donahew grew up in a suburb of Fort Worth, where cowboys and cattle still roam the streets during the daily cattle drives. “Stockyards” pays homage to the state that not only raised him but also brought him fame after years of touring around Texas bars.

Lyle Lovett brings back the Texas of the past, all the way back from the days of the Wild West. “Long Tall Texan” is the anthem for the sheriffs of the past, stopping criminals in their tracks with his boots, white horse, and a ten-gallon hat.

Robert Earl Keen has been putting out music since 1984 and has 18 albums of hard work to prove his dedication to Texas country. He got his start playing iconic venues in Austin before releasing his first album, No Kinda Dancer, which paved the way for his future successes.

Wade Bowen‘s “Texas Rain” has all of the key elements of a good, heartfelt Texas country song: drinkin’, family, memories, and regrets. He released his first solo project in 2002, Try Not to Listen, which quickly became a hit for Texan music fans.