Window at San José | © Bond West
One of Texas’s oldest cities, San Antonio is home to almost 300 years of art, architecture, and culture. The eclectic mix of immigrant groups that settled the area have poured their talents into shaping and decorating their houses of worship, making San Antonio’s historic churches among the best starting points for learning about the city’s rich and varied culture and history.

San Francisco de la Espada marks the southern endpoint of the eight-mile Mission Reach bike trail, which is the ideal way to see each of San Antonio’s missions, now UNESCO World Heritage sites. This, the smallest of the missions, is located in a quiet, semi-rural neighborhood, which provides a tranquil halfway stop for cyclists. To get a fuller picture of how these settlements operated during Spanish Colonial days, cyclists are also encouraged to take a quick detour from the trail to see the old Espada Acequia, a Roman-style aqueduct that once provided water to the mission.

Founded in 1731, San Juan Capistrano is named for an Italian priest who joined Hungarian military commander János Hunyadi in fending off an Ottoman invasion in 1456. Like its sister missions, San Juan was founded to convert and house the local Coahuiltecan people. Over the years it came to serve increasingly diverse congregants as the surrounding farmland and the nearby community of Berg’s Mill drew Catholic immigrants from different parts of central Europe. Visitors can still attend mass or simply walk the grounds. 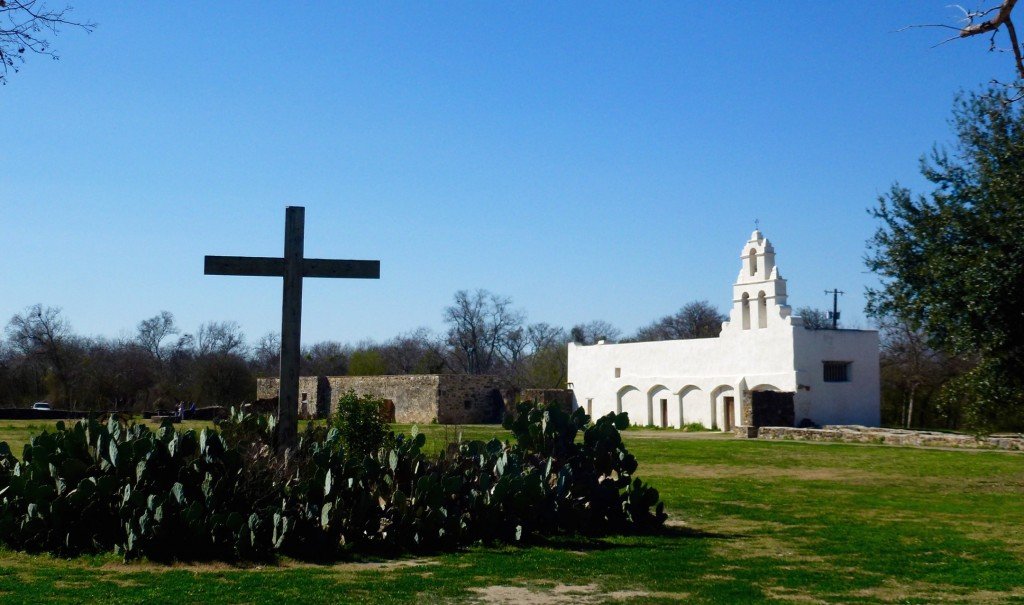 Building, Church
San José offers visitors perhaps their best opportunity to see what a mission looked like back in the Spanish colonial period; almost all of its defensive walls are intact or restored. Popularly referred to as ‘the Queen of the Missions,’ San José’s imposing chapel building is the focal point of the surrounding neighborhood, and a rose window on its southwest side has become one of San Antonio’s most beloved (and imitated) architectural ornaments. This, the largest of the San Antonio missions, is a popular place for weddings, quinceañeras, and other celebrations.
Looks like it's closed Hours or services may be impacted due to Covid-19
More Info
Open In Google Maps
701 East Pyron Avenue, Harlandale, San Antonio, Texas, 78214, USA
+12109220543
View menu
Visit website
Visit Facebook page
Send an Email
Give us feedback

Church
Mission Concepción | © Bond West
Concepción’s chapel is thought to be the best-preserved of all San Antonio’s missions. Incidentally, it is also the only mission chapel in the area (apart from that at the Alamo, which is no longer a church) to feature a traditional cruciform floor plan. Visitors should note that the restored colors of the inside of the chapel serve as reminders that the church’s exterior was also once painted with brightly colored frescoes.
More Info
Open In Google Maps
807 Mission Road, Southside, San Antonio, Texas, 78210, USA
+12105341540
View menu
Visit website
Visit Facebook page
Send an Email
Give us feedback

Cathedral
“The Saga” is projected onto San Fernando Cathedral in Main Plaza | Courtesy of Visit San Antonio
The official center of San Antonio, San Fernando Cathedral was established in 1731 by Canary Islanders, San Antonio’s first civilian colonists. Its current limestone Gothic edifice dates to 1868 and was designed by San Antonio architect and eventual mayor, François Giraud, and houses the remains of Alamo defenders James Bowie, David Crockett, and William Travis. The cathedral stands on what today is Main Plaza, which often hosts a selection of food trucks at lunchtime. Families planning to visit should be sure to drop by Tuesday, Friday, Saturday, or Sunday nights to view the San Antonio: The Saga light show projected onto the cathedral’s walls.
More Info
Open In Google Maps
115 Main Plaza, San Antonio, Texas, 78205, USA
View menu
Visit website
Visit Facebook page
Send an Email
Give us feedback

Church
First Presbyterian Church | © Bond West
Founded in 1846 by Reverend John McCullough, First Presbyterian is San Antonio’s oldest Protestant congregation. Its Gothic Revival sanctuary was built in 1910 and designed by acclaimed regional architect, Atlee B. Ayres. At the back of the sanctuary, above the dais, is one of the church’s most treasured artistic features: a stained-glass window depicting Christ’s ascension into Heaven, which was made by the Tiffany Studios in New York. Above it hangs a brass Celtic cross from the Isle of Iona, a nod to the Presbyterian tradition’s Scottish heritage.
More Info
Open In Google Maps
404 North Alamo Street, Downtown, San Antonio, Texas, 78205, USA
+12102260215
View menu
Visit website
Visit Facebook page
Send an Email
Give us feedback

The Little Church at La Villita

Church
Little Church of La Villita | © Nan Palmero/Flickr
La Villita, one of San Antonio’s most historic neighborhoods, has been transformed into a Historic Arts Village, featuring an eclectic assortment of galleries, shops, and restaurants, as well as one Little Church. Though small, there’s a beautiful simplicity to the Little Church’s subdued take on the Gothic Revival style, especially as lit by the central, stained-glass window. The church was built by German Methodists in 1879, and credit for much of the craftsmanship within it is given to a Norwegian sailor named Olaf. The church building has changed hands several times, and now belongs to the city of San Antonio.
More Info
Open In Google Maps
508 Villita Street, La Villita, San Antonio, Texas, 78205, USA
+12102263593
View menu
Visit website
Visit Facebook page
Send an Email
Give us feedback

Church
St. Joseph’s Catholic Church | © Ralph Arvesen/Flickr
Though it may feel a little claustrophobic surrounded by the walls of Joske’s department store, St. Joseph’s still stands out as one of downtown’s most magnificent church buildings. The stone sanctuary was built by the German speakers of San Antonio — once the city’s largest minority group — in 1868, and to this day features the Stations of the Cross in German. Though the Texan dialect of German is rapidly dying out, those visiting St. Joseph’s on the right days can still hear the San Antonio Liederkranz (men’s choir) sing a German mass.
More Info
Open In Google Maps
623 East Commerce Street, Downtown, San Antonio, Texas, 78205, USA
+12102270126
View menu
Visit website
Visit Facebook page
Send an Email
Give us feedback

Building, Church, Shrine
The Little Flower Basilica | © Zereshk/WikiCommons
The Basilica of the Little Flower houses an impressive collection of art, including a replica of the Infant Jesus of Prague, hand-carved Stations of the Cross, and a painting of the church’s namesake, St. Thérèse of Lisieux, ‘the Little Flower,’ painted by the saint’s own sister. The impressive building was designed by Charles L. Monnot Jr. in the Beaux-Arts style. Perhaps most importantly to religious visitors, the church houses the relics of Louis and Zelie Martin, the parents of St. Thérèse, making it one of only four basilicas in Texas.
More Info
Open In Google Maps
1715 North Zarzamora Street, Woodlawn Lake, San Antonio, Texas, 78201, USA
+12107359126
View menu
Visit website
Visit Facebook page
Send an Email
Give us feedback

Building, Church
St. Mark’s Episcopal Church | © Bond West
St. Mark’s Episcopal Church is San Antonio’s oldest Episcopal congregation. Its sanctuary was designed by New York architect Richard Upjohn, who helped to popularize the Gothic Revival style in the United States. Though the building was begun in 1859, the Civil War interrupted its construction, and it was not completed until 1877. Local folklore holds that Union troops garrisoned in San Antonio after the war frequently mistook the unfinished Episcopal Church for one of the Spanish missions. History enthusiasts will be interested to know that Lyndon and Ladybird Johnson were married here in 1934.
More Info
Open In Google Maps
315 East Pecan Street, Downtown, San Antonio, Texas, 78205, USA
+12102262426
View menu
Visit website
Visit Facebook page
Send an Email
Give us feedback
Give us feedback