Austin is known as the Live Music Capital of the world, so it is no surprise that the streets are dotted with some of the best live music venues in the country. From historical sites to fresh and upcoming bars, there is always somewhere to kick-back, relax and enjoy the wide range of artists that frequent Texas. Discover the very best places to enjoy live music in Austin.
Austin Music Hall
Music Venue 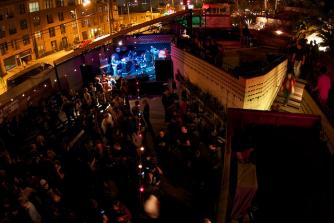 The Austin Music Hall is a converted warehouse that features a variety of artists from Trapfest to the famous new indie band, The 1975. With an art-deco interior and seating for up to 3000 guests, this venue is the best of the best. Austin Music Hall intermittently rents out the space for private and corporate events, but nothing beats seeing your favorite artist perform live amidst a myriad of other excited fans. Enjoy a balcony seat with risers or stake your claim over a space on the main floor, getting up close and personal with the band. Enjoy drinks from the bar while you relax with your friends, significant other, or co-workers – there truly is something for everyone.

Opening in 2006 as a place to showcase local and emerging indie talent, The Mohawk is now one of the most famous live music venues in Austin. With a full bar and old-fashioned, charming traditional service, The Mohawk gives off the air and charm of drinking in a saloon while watching the best touring bands in independent music perform on stage. The Mohawk even features an attached green room and bar with arcade games, arm-wrestling tables, and happy hour every weekday from 5-8 p.m. Stop by for a seasonal brew or a frosty pint on tap and enjoy some great music.

In the heart of downtown Austin – in the historic Sixth Street district – lies The Parish, one of the best indoor music venues in Austin. Notable artists such as Grizzly Bear and Yeasayer have performed on their stage thanks to the high-quality production sets, lighting, and encouraging audience. This venue fits 450 comfortably, allowing guests to enjoy performances from musical legends such as Pete Townshend, Slash, and Perry Farrell. With a wide range of artists listing Parish amongst their favorite venues in which to perform and concerts available for all ages, it truly is not to be missed.

For fans of large-scale live music gigs, the Moody Theater is a perfect choice. A full-time venue with a 2700-seat capacity, this is the new home of Austin City Limits productions. The theater itself is nestled in a full block of multi-purpose developments and is a modern architectural work with intricate contemporary features. The building has achieved a LEED certificate for sustainable development and features an HD production system. The ACL tapings are recorded and sent via direct fiber to KLRU, the home station where ACL Live is broadcast.

This live music venue is so popular that it has now spread to Houston, but nothing can beat the Austin original that rests on South Congress Avenue. Since 1957, the Continental Club has had a reputation for being the premiere music club in the region. This venue represents a blend of Americana and Texan tradition, so have a drink while you wait for the show to start and get to know the people around you. The crowd here is among the most diverse in the area and out-of-town guests are welcomed in with open arms.

For jazz aficionados, The Elephant Room is the place to visit. Featuring nightly jazz alongside a full bar and over 20 different drafts and wine by the glass, The Elephant Room promises beautiful sounds amidst a jovial atmosphere. With shows typically costing around $5, this is the best value, high-quality music venue in the Warehouse District, offering a laid-back, artistic vibe. An ever-popular destination, the venue can get crowded, so get in early for the best seat in the house.

Charli XCX, Vance Joy, and George Watsky are just a few of the artists that have recently appeared or are intending to appear at Emo’s. Emo’s has been an Austin establishment since the early 1990s when it exploded onto the punk rock scene in the Red River Music District. With a rustic charm and a little rough around the edges, this venue helped kick-start the Austin music scene and encouraged notable artists to appear in the ‘Back Room.’ With a state-of-the-art sound system as well as complete lighting and staging facilities, the recently revamped Austin institution revives the spirit of rock ‘n’ roll.

For nearly 100 years, the Paramount Theater has been the go-to spot on Congress Avenue for a relaxed night with friends. Originally a vaudeville and variety house, the Paramount Theater is now a melting pot of comedy, drama, music, and dance performances. This venue is the oldest surviving theater in Austin and has a special place in the hearts of locals. Home to any red carpet film premieres in Austin as well as being a state landmark, this is a special place to come to enjoy a true taste of Texas and enjoy local and touring acts. The Paramount has seen everything from jazz artists to spoken word poetry, so peruse the listings and choose something exactly to yours tastes.

Stubb’s might ostensibly seem like any regular BBQ joint, this unique venue takes the best food in Texas and combines it with live music and an infectiously cheerful atmosphere. In the 1970s, Stubb’s BBQ became a home-away-from-home to Joe Ely and Stevie Ray Vaughn, who brought their music to this thriving scene. Though small, Stubb’s accommodates enough people to create a good vibe to complement the great music.