Surf Fans Can Hit the Waves in the Centre of Texas 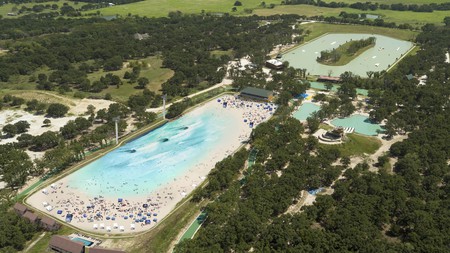 A Texan city is set to open a new resort that will allow surf fans to ride waves for as long as they like, despite being hundreds of miles from any coastline or wave break.

The city of Waco is located in central Texas, roughly half way between Austin and Dallas. This is the land of football, baseball and, for those that care to visit it, the Dr Pepper Museum. Surfing is not what first springs to mind when thinking of Waco, McLennan County, yet a new resort is aiming to change those misconceptions.

In the spring of 2018, the BSR Resort will open just outside Waco. The resort will include a two-acre lake, with white sand beaches, despite being over 200 miles from the ocean. Those looking to surf, rather than lie out and catch up on their tan, can take advantage of infinite, perfectly formed waves.

BSR Surf Resort is going to feature Perfect Swell® technology. Perfect Swell can produce an infinite variety of waves, and the ride length is only limited by the pool size. Since BSR will feature a 2-acre surfing lake, multiple waves can be produced simultaneously with room enough for 50+ surfers. Not only that, they can shape and tailor the waves depending on the requirements, with seven different types of wave depending on the surfer’s ability.

The waves mimic the same dynamics of the ocean, with the type, size and frequency all easily adjusted with the simple touch of a button.

While it may not offer the same unadulterated rush that the ocean can supply, or give big wave surfers the 50ft monsters that they crave, it can bring the sport to entire populations of people who would otherwise never surf.

The BSR Surf Resort will be the largest inland surfing venue that AWM have ever built, and despite not being open for months, there are already Texan families buying year-long season passes, each at $999 a pop.

With artificial waves to surf becoming more popular, and surfing set to make its Olympic debut in 2020, the sport is in rude health and less and less confined to those by the beach. Texans can obviously still surf the natural waves at the likes of Quintana Roo, Boca Chica, South Padre and Mansfield Jetty, but for those inland, the opening of the BSR Surf Resort is a huge development.