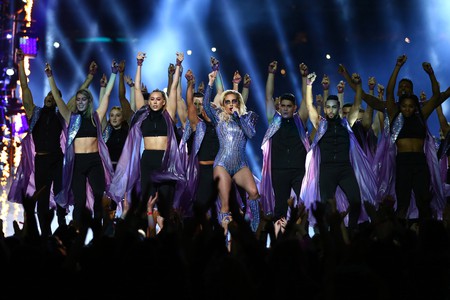 While many predicted Lady Gaga to make a big political statement when she took the stage for the Super Bowl LI halftime show on Sunday evening, her 13-minute set, while a dazzling spectacle packed with some of the artist’s biggest hits over the years, was short of controversy. However, among the drones, aerial acrobatics, and single costume change, there were a few hidden messages that will make fans of Gaga, and the recent protests sweeping the nation since President Donald Trump’s inauguration, proud.

In January, it was predicted that the NFL would spend upwards of $10 million on Lady Gaga’s halftime show, possibly making it the most expensive one yet. True or not, Gaga and the team behind the production pulled out all of the stops, including a unique fleet of backup dancers in the form of 300 drones provided by Intel. And while Lady Gaga didn’t actually jump off the roof of Houston’s NRG Stadium, her tethered descent to what looked like the Tower of Sauron was a convincing illusion. To say the least, it was a performance that will surely reignite her career.

It’s no secret that Lady Gaga isn’t a fan of President Trump, being a vocal supporter of Hillary Clinton during the campaign and staged a one-woman protest outside Trump Tower following his election victory, so fans expected the Joanne artist to have a few words for the 45th president while in Houston. Speaking at a press conference before the Super Bowl, Lady Gaga addressed what messages viewers could expect from her performance: “Well, I don’t know if I will succeed in unifying America. You’ll have to ask America when it’s over. But the only statements that I’ll be making during the halftime show are the ones that I’ve been consistently making throughout my career. … I believe in a passion for inclusion. I believe in the spirit of equality, and the spirit of this country as one of love and compassion and kindness. So my performance will have both those philosophies.”

However, that didn’t mean there weren’t a few subtle messages hidden within her set. “Poker Face,” “Born This Way,” “Telephone,” “Just Dance,” “Million Reasons,” and “Bad Romance” all made her Super Bowl supercut, but it was the pre-recorded opening that Gaga gave a nod to the underrepresented and oppressed. Gaga opened with “God Bless America, but after one run through its refrain, she quickly segued into Woody Guthrie’s “This Land Is Your Land.” For those unfamiliar with the history behind Guthrie’s folk classic, the U.S. Library of Congress states that it was written in response to “God Bless America” because it ignored the uneven distribution of wealth and land that he observed. A theme song among protestors today, some of Guthrie’s verses are more radical than others, including some that never even made the recording:

One bright sunny morning in the shadow of the steeple,
by the relief office I saw my people.
As they stood hungry,
I stood there wondering if God blessed America for me.

Amazingly enough, the first taste of Lady Gaga’s halftime performance was delivered back in 2012, courtesy of none other than The Simpsons. In “Lisa Goes Gaga,” Gaga sings to the people of Springfield, reminding them that all little monsters are beautiful. Lady Gage takes flight in the episode, just as she did at Super Bowl LI, and both outfits are of similar style, sans the firework-shooting bra.

While many people are claiming that The Simpsons predicted her halftime show five years in advance, Gaga did voice her own character, and so it’s more likely that Gaga and her team decided to bring some of it to reality.