Into the Unknown: Caver, Inventor and 21st-Century Frontiersman Bill Stone 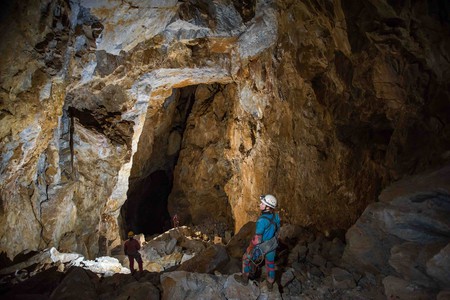 Bill Stone pushes the frontier. The world’s foremost caver, the explorer has led teams to the deepest depths of the Earth, spent weeks in absolute darkness and faced down thousand-foot drops. Now, he’s turned his sights to the sky, working with NASA to build robots capable of scouring Jupiter’s icy seas and pledging to mine the moon for rocket fuel.

With a resume that reads like a Jules Verne novel, the mustache of a Texas oil man and an obsessive compulsion for exploration, Bill Stone is a real-life storybook character.

Having led dozens of international caving expeditions over a 30-plus year career, Stone has spent months in underground camps nearly two vertical miles deep. Living for weeks away from sunlight, contending with flooded tunnels, whitewater rivers, mile-long belly crawls and the psychological horrors of a life lived on the edge of survival, Stone’s proclivity for extremes is tempered only by the sobriety he brings to exploring Earth’s final terrestrial frontier. 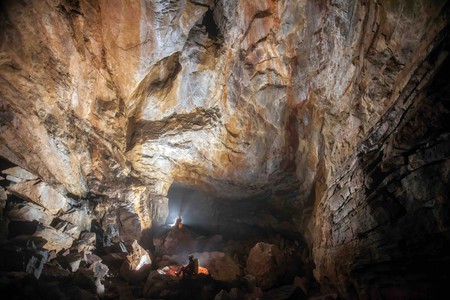 An exploration team in April 2018 in the lower section of the “Infinite Borehole” in Cueva de la Peña Negra, Mexico, at the -750 meter level of the cave | © Kasia Biernacka / U.S. Deep Caving Team

“The idea of ‘adventure’ is antithetic to what I do,” says Stone. “Nothing I do is about adventure. The word was famously parodied by Arctic explorer Vilhjalmur Stefansson who said: ‘Adventure is the result of poor expedition planning.’ I try to avoid adventure. I’m not into adrenaline-induced thrills.”

As a teenager growing up in 1960s Pennsylvania, Stone watched as Neil Armstrong and Buzz Aldrin landed on the moon. Like “all kids back then, I wanted to be an astronaut,” he says.

Instead, life lead him to the vast darkness below ground, when a high school math teacher invited professional cavers to the school’s outdoors club. “They showed us pictures of people on ropes, descending into black abysses. It was absolutely wonderful, and a true outlet for a nerdy kid who spent most of his time studying.”

Stone went on to lead his university’s Outing Club where he made connections with Texas-based explorers pioneering deep cave exploration in Mexico. “At that time, Mexico was a wide open, completely unknown place as far as cave exploration went. They sent photos of a near-400 metre (1,233.6 ft) drop. Swallows would circle out from it every morning, and come back at night by the tens of thousands. It something that nobody have ever imagined.”

Years later, as a PhD student at the University of Texas, Austin, Stone was among the first wave of cavers to explore Mexico’s Sistema Huautla – a limestone warren in the Sierra Mazateca mountains of Oaxaca that would captivate him for nearly two decades. 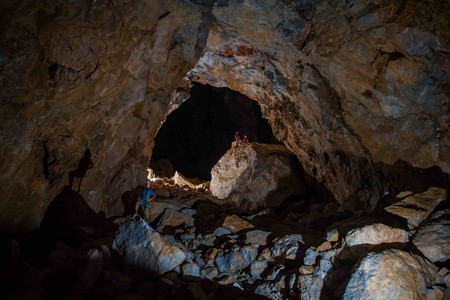 In 1994, some 15 years after first stepping foot in the system, Stone returned to Huautla to conquer its depths with a 44-person strong expedition team. The journey that followed, now a tale of near-mythic proportions within the caving community, ultimately took the life of diver Ian Rolland, forcing back everyone but Stone and teammate Barbara am Ende, who set the record for the deepest cave dive in the Western Hemisphere.

Now in his late 60s, Stone still dedicates three to four months a year to expeditionary work, mostly focused on Sistema Cheve, a system of caves in the mountains of southern Mexico with the potential to be the deepest on Earth – a title currently held by the Krubera Cave in Abkhazia, a contested territory on the eastern coast of the Black Sea. The two caves’ difference in depth – around four hundred metres (1312 ft) – “is both a lot and a little,” he says.

“When you get into these massive systems you run into obstacle after obstacle, and this is why it becomes, in the truest sense of the old British South Pole expeditions, ‘man against nature.’ It’s gloves off. Whatever technology you can throw at it is what we do, and we frequently are inventing our own gear, because it doesn’t exist.” 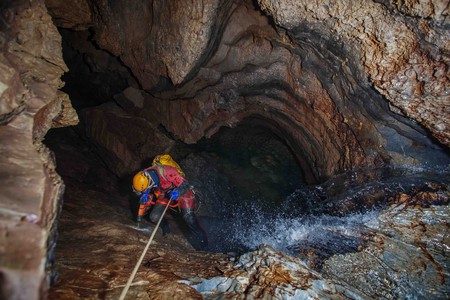 With nearly 30 patents to his name, Stone has created everything from scuba diving rebreathers to life support equipment and new ways to generate power underground. In 1999, he devised a digital vehicle that used an array of sonars and sophisticated sensors to map the cave of Wakulla Springs, near Tallahassee, Florida. The cutting-edge tech caught the attention of planetary scientist Dan Durda, who wanted to create a similar, autonomous device to explore the oceans of Europa, one of Jupiter’s moons, for extraterrestrial life.

In 2003, Stone accepted the NASA-funded challenge, creating autonomous underwater vehicle DEPTHX (DEep Phreatic THermal eXplorer), which broke new ground as the first autonomous robotic system to explore and map a subterranean cavern, autonomously decide where, when and how to collect a biological sample, and implement an innovative 3D-mapping system as part of a real-time navigation engine.

Creating robotic systems like DEPTHX has been Stone’s “day job” ever since. His Austin-based company, Stone Aerospace, builds pioneering machines for planetary and underwater exploration. “We come up with crazy ideas that other people think are too far out there, or too expensive, and we find a way to make them happen, and then test them in remote areas that are considered to be analogues for outer planet systems,” says Stone.

Following DEPTHX, Stone Aerospace inventions include ENDURANCE, designed to explore under Antarctica’s frozen ice; VALKYRIE, capable of drilling through the ice to collect samples; and ARTEMIS, able to raise scientific sensors into contact with the ice overhead, collect water samples, and navigate and dock autonomously.

An exploration team in April 2018 in the lower section of the “Infinite Borehole” in Cueva de la Peña Negra, Mexico, at the -750 meter level of the cave | © Kasia Biernacka / U.S. Deep Caving Team

Manned exploration however, is never far from Stone’s mind – in particular, he remains captivated by his childhood dream of going to space. But first, “something fundamental has to change if we are to see common access to space in our lifetime,” says Stone.

“The Bransons and Musks working to provide commercial access to orbit are doing great stuff. Soon though, they’ll hit a hard wall where they really can’t go too much cheaper, because they’re fighting Newtonian mechanics.”

This, Stone explains, is because rocket propulsion is extremely expensive, largely due to the weight of the rockets. “Everything you do in space you pay by the kilogram,” says Stone. “You couldn’t even make money shipping gold bars from the Moon to Earth because of the cost of transporting the weight.” With fuel taking up roughly 95% of the mass of a rocket, today, fuelling up in outer Earth orbit would be a game-changer.

“Rocket fuel is made of hydrogen and oxygen. For a long time, we’ve known we could get oxygen from the moon. But then Dr Paul Spudis, one of the premier lunar geologists in the world, identified an estimated 10 billion tons of hydrogen at Shackleton Crater on the south pole of the moon. You could mine it right there, and suddenly, you’re looking at a 20:1 lower cost of doing business in space. Once you set that up, access to space becomes more affordable for everybody.” 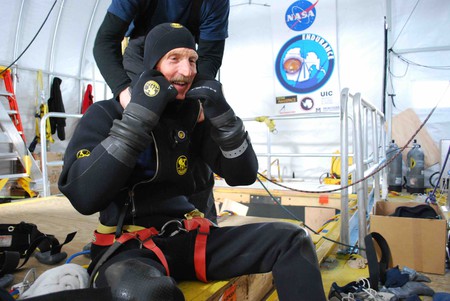 Bill Stone preparing for the world’s coldest recorded dive to a depth of 40 meters with a water temperature of -5C (23 F) in Lake Bonney, Antarctica | © Vickie Siegel / Stone Aerospace

For Stone, the idea of building petrol stations in space is a serious mission. He and his partners incorporated in Austin as Shackleton Energy in 2007, building the equipment and tech necessary for mining the Moon and pushing hard to find investors. “It’d cost about $17 billion dollars over the course of about seven years.” says Stone. “But all it takes it one person to say yes.”

For the record-breaker, the darkness of the unknown has beckoned once more. And like Everest, Cueva Cheve and the Moon landing before it, it’s just a matter of time until an explorer gets there.