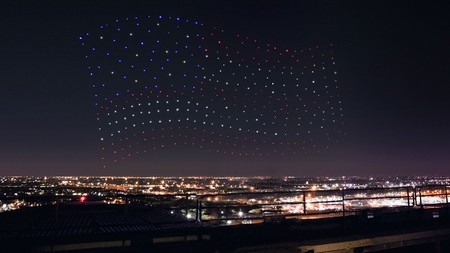 Lady Gaga produced a stunning halftime performance at Super Bowl LI. It was no 25-point comeback, but those tuning into the National Football League’s biggest event just for the halftime entertainment weren’t disappointed. Gaga’s performance was aided by an unlikely group of backup performers – a fleet of 300 drones.

Intel’s Shooting Star drones provided an exhilarating backdrop to Lady Gaga’s performance in Houston, Texas, creating different colorful formations in the sky, including twinkling stars and an American flag for the finale. At the end of the halftime show, the drones formed the Pepsi logo in the sky. 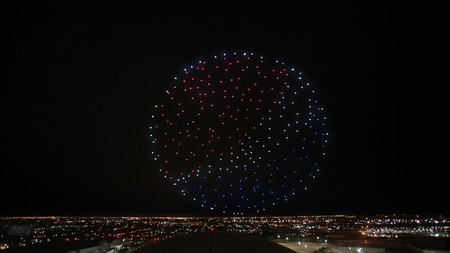 “Lady Gaga and the Super Bowl creative team wanted to pull off something that had never been done before and we were able to combine Intel drone innovation with her artistry to pull off a truly unique experience,” said Josh Walden, senior vice president and general manager, New Technology Group, Intel in a press release. “The potential for these light show drones is endless and we hope this experience inspires other creatives, artists and innovators to really think about how they can incorporate drone technology in new ways that have yet to even be thought of.”

The Shooting Star drones are built specifically for entertainment purposes, such as festivals and major events like the Super Bowl. The quadcopter drones are equipped with LED lights and are capable of creating over four billion color combinations, and can be programmed to perform any animations.

The drones, which each weigh less than a volleyball, were controlled by one single pilot, and can fly for 20 minutes without needing to recharge. Intel received special permission from the Federal Aviation Administration to fly the fleet of drones up to 700 feet and to fly them in a restricted airspace. 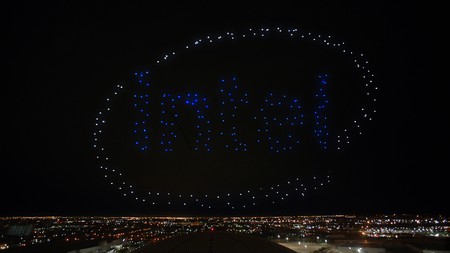 Intel’s flying formations weren’t the only drones to make the headlines during the Super Bowl. One of Amazon’s many commercial during the broadcast teased the future use of drones to deliver its products. The ad features a woman asking Alexa to order Doritos via Prime Air, a drone is seen hovering outside the window, while Alexa says: “Look for delivery soon.” Amazon began commercial testing in Cambridge, England, in December 2016, but it’s not clear when the service will be rolled out properly.

Anyone getting too excited by the done commercial may be disappointed by the small print, which read: “Prime Air is not available in some states (or any really). Yet.” Featuring drone delivery in such a high profile commercial suggests that could change in the near future.