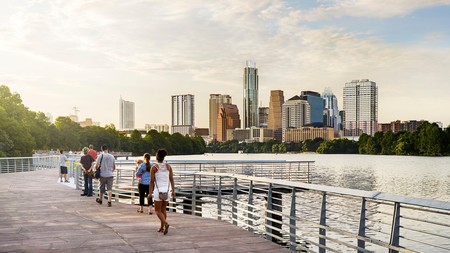 A highlight of any Texan tour is Austin, the live music capital of the world | © Glasshouse Images / Alamy

With never-ending dusty roads heading towards distant horizons, Texas is perfect for road tripping. The Texas Triangle is a route that connects some of the state’s most beautiful towns and cities via classic Texan highways. So fill up the tank and strap yourself in, it’s time to hit the road.

Start off in Dallas

The Big D is a buzzing city full of great food, shopping and nightlife, and is the perfect place to start your Texan adventure. Find somewhere to stay and spend a good few days exploring the city. You can commit an entire day to sampling Dallas’s famous shopping districts, with everything from unique boutiques to sprawling malls, and another day can be spent exploring the exciting range of galleries and museums, with contemporary art spread all over the city. While you’re here, be sure to hit up some good food joints for some classic Tex-Mex, before hitting the town and making the most of the city’s lively nightlife. There’s plenty of picturesque green spaces to stretch your legs, too, with White Rock Lake, Dallas Arboretum and Klyde Warren Park – a funky park atop an actual freeway – all offering moments of peace in this fast-paced metropolis. 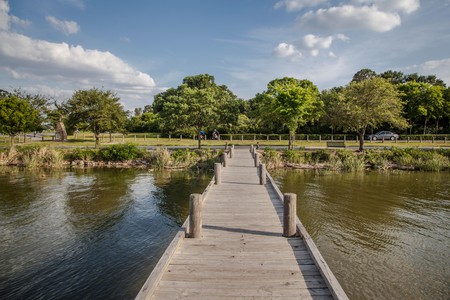 City Rustlin’ in Fort Worth

Just a little west of Dallas is the city of Fort Worth. The Dallas-Fort Worth-Arlington metroplex is the fourth largest metropolitan area in the US, so geographically one city very much blends into another. But this place has a very strong identity of its own, dating back to 1849 when it was an army outpost. With a rich history in the Texas Longhorn cattle trade, this is a place steeped in Wild West heritage, and to this day the city embraces it. A trip down to the Stockyards in an absolute must. Here you’ll see the world’s only twice-daily cattle drive, where a herd of majestic Texas Longhorns stroll through the town – it’s a bizarre image, as cowboy history meets modern city life.

In the Stockyards you’ll also find Billy Bob’s Texas, the world’s largest honky-tonk, and a year-round rodeo. Meanwhile the Cultural District has a diverse range of exciting museums and the Entertainment District is the place to go to see a show. The city center is only a 30 minute drive from downtown Dallas, but it can be over an hour on public transport, so it may be worth finding fresh accommodation in Fort Worth. 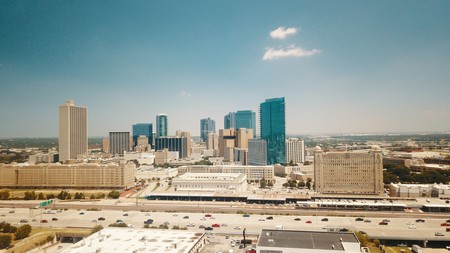 Fort Worth, TX | Photo by Dan Formsma on Unsplash

The Road to Austin

Now it’s time to properly hit the open roads. The 190mi (305km) trip towards the state capital along Interstate 35 takes you through a number of towns worth visiting to break up the long journey. First stop is the unusual city of West, one hour from Fort Worth. After a wave of immigration at the turn of the twentieth century, West became a hub of Czech culture, and to this day you can still hear a bit of Czech being spoken around town. Be sure to try a traditional kolache pastry from a local bakery while you’re here.

Last stop before Austin is the gorgeous Victorian city of Georgetown, just over an hour from Waco, and a further 30 minutes from central Austin. Be sure to head to Downtown Square – one of the most beautiful square’s in all of the South – and explore classic architecture, boutique shops and excellent dining spots. You can also check out the Inner Space Cavern for some underground magic, and don’t miss Blue Hole Park, a picturesque lagoon surrounded by limestone bluffs that, incredibly, is only five blocks from Downtown Square. 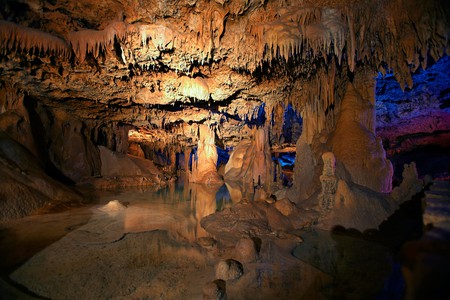 Finally arriving in Austin will perhaps be the most exciting part of your journey. This is a vibrant city that offers an experience like no other. The city’s unofficial motto is Keep Austin Weird, which perfectly captures the joyously offbeat atmosphere here. It’s a very pretty city to walk around and there are countless excellent outdoor spaces, cultural hotspots and cool neighbourhoods worth exploring. But Austin may be best known for what happens when afternoon becomes evening. 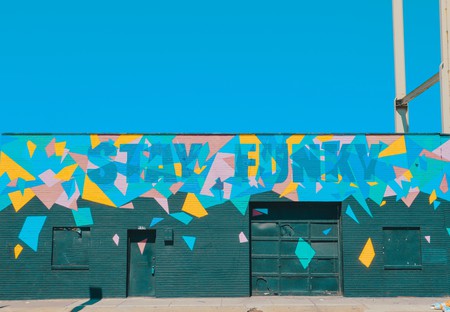 This is the live music capital of the world, so catching a gig is absolutely essential. Meanwhile there are countless great breweries, bars, restaurants and creative food trucks waiting for you either side of the show. We definitely recommend staying in Austin for at least a few nights, so you can really embrace this larger-than-life city. It also allows for some day-tripping out of the city; don’t miss Hamilton Pool Preserve, a stunning natural pool in Dripping Springs, where you can swim in beautiful waters and shower under the 50ft (15m) waterfall.

Next up is another hour and 30 minute trip along Interstate 35 towards San Antonio. We recommend splitting the journey in two by stopping off at Buc-ee’s Gas Station in New Braunfels. Buc-ee’s is a staple of any Texan road trip, but this particular branch is the world’s largest convenience store, at over 66,000sqft (6,131sqm). Refuel, grab some jerky, get lost looking for some snacks and come out the other side ready for the next leg of your tour.

San Antonio is another culturally rich, visually pleasing Texan city. This place is 300 years old but does not look its age one bit, having developed into a cosmopolitan hub that boasts some of Texas’s tastiest food, most interesting museums and picturesque parks. It’s also home to the Alamo, the legendary compound that stands as the most famous symbol of Texan independence. We recommend taking a leisurely stroll along the scenic River Walk, stopping for food and drinks along the way; you’ll discover little fragments of history while soaking in the buzz of every street corner. 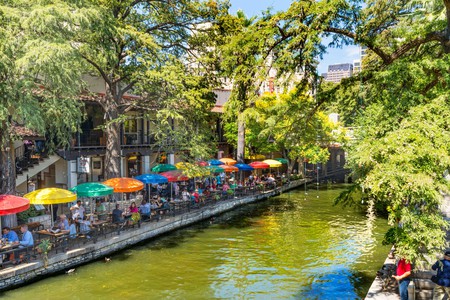 Before heading east we also recommend making a day trip out west, around an hour’s drive, to Bandera. You can’t miss out on a visit to the Cowboy Capital of the World, and there’s no place better to go on a ranch tour or get some horseback riding lessons.

Space Out in Houston

The longest leg of this road trip is the 197mi (317km) trek along Interstate 10 between San Antonio and Houston. Recommended stops along the way include a boozy detour to the Blue Lotus Winery and Seguin Brewing Company in Seguin and a trip to the Luling Oil Museum in the oil town of Luling, once known as the toughest town in Texas. Around halfway to Houston you’ll find Schulenburg, home to a number of painted churches that look pretty on the outside, but breathtaking on the inside. They stand as a fascinating monument to German immigration, a hugely important element of Texas history – in 1930 it was estimated 36% of the population was German.

From Schulenburg it’s only another hour and a half to Houston, the largest city in Texas. As a city built with oil money, and boasting a history of technological innovation, it’s also one of the richest. But the sheer scale of Houston has resulted in one of the most diverse populations in the US. Neighbourhoods vary from hipster to high-end and everything in between, while festivals and events celebrating all kinds of cultures are constantly springing up. Houston is also one of the bastions of Tex-Mex so, when you’re not exploring Space Center Houston, be sure to take your dining experiences here very seriously. Grab yourself some grub and a frozen margarita, and enjoy the sound of the irresistible Southern drawl that Houstonians are famous for. 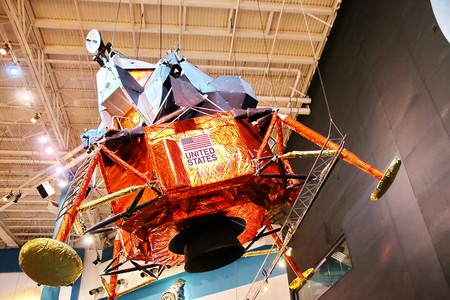 Head to the Beach at Galveston

The final leg of our epic Texan adventure takes us to the southeast coast and the charming island city of Galveston. It’s only an hour from Houston, so it’s no surprise that this is a summer favourite for Houstonians looking to escape the city. Expect laid-back seaside vibes, with a magnificent main beach that goes down a treat with all that sun and sea breeze. There are a number of excellent resorts here, so treat yourself to some well-earned luxury, grab a cocktail and head poolside to soak in the sun at the end of your ultimate Texan road trip. 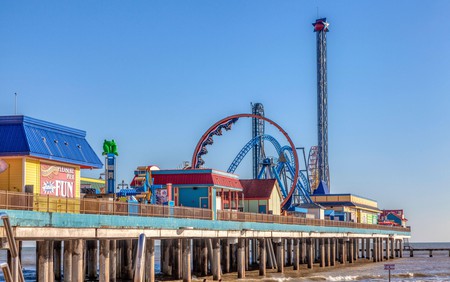