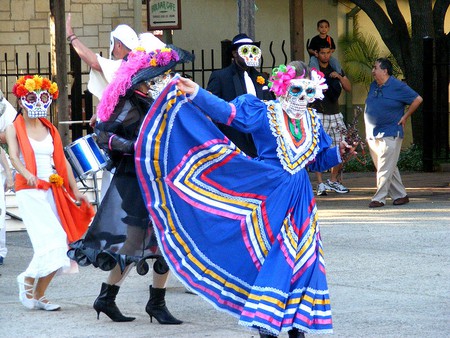 Dia de Los Muertos, or ‘Day of the Dead,’ is a Mexican holiday that commemorates family members and friends who’ve passed. While celebrations in Mexico are commonplace, with Texas’ large Mexican-American population, Dia de Los Muertos events are present throughout the Lone Star State, highlighting just how connected Tejanos are to their Mexican history and roots.

In case you can’t get south of the border this Dia de Los Muertos, check out how Texans remember their loved ones through special ceremonies in historic cemeteries, celebrate with ballet folklórico showcases, and create large ofrendas (altars) in the middle of big cities like San Antonio.

San Antonio hosts the largest Dia de Los Muertos celebration in Texas, and for 2018 the city is providing two different worthy festivals. From October 27-28, Dia de Los Muertos at La Villita offers visitors a chance to admire the largest open ofrenda to those who have passed in the city. They can dance to live music by Bidi Bidi Banda, Femina-X, Pinata Protest, among many others, or enjoy a parade through downtown and cultural dance performances such as ballet folklórico. There will also be an arts and crafts show and free workshops for kids. Be sure to check the calendar for other activities that weekend, such as live poetry, music at Arneson River Theater, and Day of the Dead art shows – all for free.

One Dia de Los Muertos event isn’t enough for San Antonio citizens. A few days after the La Villita fest, locals and visitors can celebrate again on November 2-3 at Muertitos Fest with SAY Si. This free Dia de los Muertos festival will be more family-focused and offer an educational angle to the holiday. The 2018 event will focus on indigenous cultures of Mexico and the origin of the holiday, which transpire through folk art workshops, food booths, an artisan mercado, and music and cultural performances.

While most people go to Terlingua to explore the Big Bend National Park on the US-Mexico border, their Dia de Los Muertos celebration is quite unique in Texas and an annual tradition for both locals and visitors. On November 2, a sunset meeting at the Historic Cemetery in the Terlingua Ghost Town is lit by candles and offerings on the graves of loved ones. Many of the cemetery graves are large stone altars built above ground, creating a particularly ethereal scene.

Many event attendees arrive with faces painted as skeletons – a common Dia de Los Muertos tradition – while others wear red roses, a signifier that the memory of those who have passed will remain strong. Visitors can bring special items or mementos like jewelry or flowers to place on three large pyramid-like altars to commemorate loved ones, or, walk the cemetery to reflect on life and death, overlooking a setting sun and ceremonial candles that flicker in the desert’s dark. Following the event, the masses head to the Starlight Theater for music, drinks, dancing, and socializing with various members of the community.

Corpus Christi’s Dia de Los Muertos Street Festival is held in the downtown Marina Arts District. The festival includes a community-wide display of ofrendas or altars attributed to the passing of loved ones at the Ritz Theater. The community are welcome to submit their own ofrenda to be placed on stage. The Hecho-a-Mano Expo will have over 85 arts and crafts vendors and is one of the most beloved aspects of the festival. There is also a luchadores wrestling exhibit at the Lucha Kaboom stage, mariachi performances, ballet folklórico dances, and multiple live music shows by bands like Mexicana. Whether visitors are watching luchadores flying through the air, or shopping among artisanal products, there is plenty to keep all ages entertained at this Dia de los Muertos celebration on October 27.

#DiadelosMuertoscc Make sure to stop by @ccritztheatre to check out this amazing #ofrenda! I was so happy when they asked us to participate again! The arch is HUGE this year!! (See me for scale lol) I can’t believe it’s been a whole year already 🤯 Don’t forget to tag us in your pics!! Ps we just put up our BIGGEST backdrop ever! 😍 see our story for a sneak leak! Deets to follow 💜#poshandposypaperie #paperflowers #diadelosmueros #downtowncorpuschristi #virgencita

Texas’ state capitol is ablaze with Dia de Los Muertos fanfare come October 27. Hosted by the Mexic-Arte Museum, Viva La Vida Fest, or ‘Live the Life Fest,’ is Austin’s largest and longest-running Dia de Los Muertos festival. Viva La Vida Fest begins with a grand parade at noon that will feature a mix of live music, dancers, and floats all marching down 6th Street. Following the parade, there will be a free street festival until 6pm, which will include hands-on arts and crafts, a low-rider exhibition, dances by ballet folklórico and aztec dance performers, and live music by Latin Freestyle Records. Kids can enjoy face painting and story time with Matt de la Peña and Christian Robinson.

El Paso is one of Texas’ most notable border cities, and they have a Dia de Los Muertos festival, or two. The Concordia Cemetery hosts their own cultural celebration inside their historic cemetery, which is the burial place for several gunslingers, like John Wesley Hardin. This one-day event occurs on November 3, and includes people dressing up in traditional Mexican wear such as floral peasant blouses and dresses. Also on offer are artisan and vendor booths, a scavenger hunt, food trucks, live music, dancers, poetry readings, and skull face painting. There is a $5 fee to enter.

For those seeking a no-fee experience, the El Paso Museum of Art will host a free Dia de Los Muertos event on November 3. Transformed by a visiting artist collective from Mexico City, Colectivo Ultima Hora, the museum will feature some stunning ofrendas. They will also host a mask decorating station and printmaking workshop, as well as folkloric dance, pan de muerto (traditional sweet bread served on the holiday), and live music.