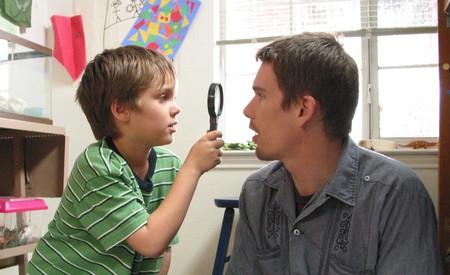 It took American film director, Richard Linklater, over a decade to make Boyhood, but it was certainly worth the wait. Its existence had been veiled in secrecy, known only as an ‘Untitled 12-Year Project.’ The aim to keep the project’s identity hidden from the outside world is a testament to the cast and crew’s artistic vision and integrity. We learn more about the man behind one of the most iconic films of 2014.

The film invites its audience into the private world of Mason (played by Ellar Coltrane), to watch his physical and emotional growth from a boy of six through to adolescence. A true coming-of-age story in every sense, Linklater commits the film’s vision to Mason’s perspective. By honoring a child’s view, the director has ensured a nostalgic reverence to his development. Its documentary style of storytelling captures the corruptive adulthood confronting Mason at every step without infecting the purity of its observational quality. We watch as Mason is uprooted by his mother, leaving friends and roots behind. We recoil as Mason endures alcoholic and disillusioned stepfathers.

Mason’s formative years are challenged in familiar ways by the failures of the adults that surround him. A sensitively devised scene where Mason’s father (played by Ethan Hawke) admits to his son that ‘no, technically there are no elves,’ is followed by a scene of violation. His rather overly abhorrent stepfather enforces a haircut just as the magic has slipped away: ‘you’re going to look like a man, instead of a little girl.’ Mason’s shield to the growing harshness around him is brutally shaved off, exposing him to the gender posturing he will eventually reject.

Coltrane’s naturally shy charisma fits perfectly with the character we see grow up in front of us. His macho second stepfather ironically conceives Mason’s artistic flair for photography and observation by gifting him a camera. This strengthens the audience’s observatory connection with the protagonist’s perspective. As he finds beauty and purpose in photography, you become heartened by his new direction. Linklater’s lasting success is encouraging the maternal and paternal relationship the audience has for Mason. It is with proud attachment that we see him survive the tribulations of his boyhood because for the most part, we have too.

For children of the nineties, Boyhood delivers an array of cultural touchstones conjuring childhood nostalgia. The film’s soundtrack navigates the decade to place its audience firmly within the context of the film. By opening with Coldplay’s anthem of unrequited love, Yellow, we are implanted into the post-9/11 melancholia that characterized the early nineties. The track’s uncertain nature beautifully echoes the reality of a six-year-old coping with the separation of his parents.

Linklater collects transient moments of cultural assimilation, from queuing up to receive the latest Harry Potter book to time spent playing on a gameboy, assimilating the audience into the film’s cultural growth. While speaking more to the experiences of boys – the casual vandalism, the first glimpses of female sexuality in your mother’s catalogue – Linklater does not make it exclusively male. The director cast his daughter Lorelei Linklater to bounce off the insular Mason. Her evolution from the teasing, Britney Spears singing girl to smart Austinite woman is a pleasure to watch.

Boyhood has faced some degree of criticism for its failure to address the issue of race. In his article ‘Not Everyone’s Boyhood’, Imran Siddiquee justifiably challenges its ‘all-encompassing’ portrayal of an American ‘Boyhood.’ It does seem incongruous that the American society so consumed by the issue of race has no place in the cataloguing of Mason’s transformative years. Linklater’s failure in this should not disparage the director’s achievements in purporting an American reality.

It should be noted that its documentary style in following a child through to adolescence is redolent of Steve James’ Hoop Dreams (1994). James followed two inner city black Americans over five years, tracking their quest to become basketball players. It was a profound examination of low income life for black Americans in Chicago. Whilst Linklater’s Boyhood has obvious situational contrasts, the director has carried Hoop Dreams’s spirit of exposing familial reality into his feature film.

The performances from Mason’s mother (Patricia Arquette) and father (Ethan Hawke) become increasingly invested as the film journeys on. Upon Mason’s 15th birthday, Mason Sr. gives his son a poignantly devised present: ‘I’ve put the band [The Beatles] back together for you.’ His failed musician of a father lovingly put the best post-Beatles solo work together to bring back the essence of the band. It is no surprise that the idea came from a real gift Ethan Hawke gave to his eldest daughter (Hawke has since released The Black Album track list online). It shows the personal nature to the film’s performances.

Not only have they brought an organic ageing process to the screen, but private aspects of their true personality. Speaking after a screening, Patricia Arquette divulged her sadness at leaving the project: ‘I didn’t want it to be the end. I don’t want to give this to the world. I don’t care what their opinion is, I don’t want them to get to have a say in that.’ Her sentiments mirror her last scene with Mason. Olivia’s desperation at her son’s parting for college concludes Linklater’s negation of adulthood: ‘you know what’s next, huh? It’s my f***ing funeral!’ A fragility begins to overwhelm parental notions of responsibility. Olivia’s vulnerability is laid bare, Mason Sr. has evolved into a responsibly dull parent – a course for Mason’s independence is set forth, one that should be unadulterated in the literal sense of the word. The film has been building up into the present, which Mason must seize.