An Introduction To George Strait In 10 Songs 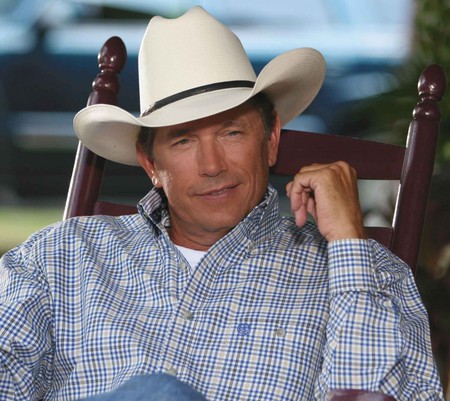 The King of Country, The Fireman, The Man, and The Cowboy–all of these names were bestowed upon George Strait for a reason. He is the epitome of country and undoubtedly another blooming bluebonnet of Texas.

Surprising to some, Strait was a huge fan of The Beatles and Frank Sinatra growing up in Poteet, Texas. During his early days, he became the lead for the Ace In The Hole Band. Following several failed attempts at stardom in Nashville, The Cowboy hung up his hat on music. Instead, he took a job designing cattle pens. If it wasn’t for his wife insisting that he stick to his guns and give music just one more year, Strait would never be who he is today. That summer, MCA Records signed Strait for one single. This got him back on his horse and was the first rodeo of his everlasting country career.

Famous for his live performances, it is no surprise that Strait holds the record for the largest attendance of fans at a single concert in the U.S. Who knew that a simple case of the stomach flu would be where it all began? Strait took the reins for the ill headlining star of the Houston Rodeo in 1983. In just a straightening of a saddle, this man was about to take the crown in country.

Country music has seen many shifts within the genre. Strait stayed true to its roots. He didn’t dabble with a more ‘poppy’ or synthesized sound. A true legend, he made his name by going back to the original tone of good-old country dance hall music that makes you two-step until your heart is content.

It is verging on impossible when asked to pick a favorite George Strait song. The man is in a league of his own with more CMA and ACM awards and nominations than any other artist. He even beat Elvis with more hit singles. Brace yourself cowboys and cowgirls for George Strait in 10 songs.

Arguably one of his most self-reflective songs, ‘Troubadour’ delves deep into George’s soul. The comparison to the infamous outlaw and cowboy debonair Jesse James makes you fantasize about riding into the sunset on a horse. This is a reminder that despite the inevitable physical signs of aging, the best of us still feel 25 at times. Yes George, you will always be our troubadour.

When this plays, a whole herd of cantering two-steppers storm towards the honky-tonk dance floor. ‘Give It Away’ is country at its finest. A good country song tells a story and this thoroughbred doesn’t sell itself short – it tells one hell of a story. For all those men who thought ‘aw, she’ll be back’, this one’s for you. Just give it away.

‘The Best Day’ sums up the unique relationship between a father and his son. Strait and his son George Jr. or ‘Bubba’ are two peas in a pod with their love of roping, horses, hunting, and fishing. You can’t help but wonder if this tune was on their minds the first time George watched Bubba compete in the Houston Rodeo. Then moments after, George graced the stage to perform. That must have been his best day.

What happens when you have a deep love for Texas but it also happens to be where all your ex’s live? You hang your hat in Tennessee. This hilarious ode to the trials and tribulations surrounding ex-lovers is country to the core. Lines like ‘she forgot I hung the moon’ and ‘got the law looking for me’ touch upon this troubadour’s sense of humor.

Certainly, this song strikes a chord and acknowledges what is important. In a tip of a hat, life’s precious moments can go galloping past you. Whether by foot, plane, train or automobile, this tearjerker will make you drop everything and run to the person you love the most. It exudes the endearing romantic side of Strait that has always set him aside from the rest.

Always a man of great wisdom, Strait highlights valuable life lessons throughout his songs. ‘Ace In The Hole’ is what he renamed his former band before it was just ‘George Strait’. If times get too tough or you are planning a trip to Vegas, just think of King George as a compass pointing you in the right direction. Remember, you’ve got to have an ace in the hole.

A perfect example of why he is The King of Country, ‘Check Yes Or No’ is all about the story. If you didn’t have a childhood romance, this adorable song will make you wish you did. George is still married to his childhood sweetheart, so you wouldn’t expect anything less. This one will make even the toughest cowboy smile.

This was Strait’s comeback song following his retirement from touring and ‘The Cowboy Rides Away Tour’. The brilliant dialogue between two lovers still reigns true to this king’s neo-traditional country style. After many decades, he’s still got it. Well there’s something – it’s better than nothing.

‘Fireman’ is provocative, cheeky, hilarious and irresistibly charming. A tad faster-paced than some of his other songs, but boy, it works. Some listeners may go burning out of control when experiencing this tune. With a little mouth-to-mouth they will be raring to go though. George Strait can cool anything down. After all, this fireman is the King of Country.

‘Amarillo By Morning’ is a fan favorite when it comes to the man’s music. Serving as a second national anthem for Texas, this yellow rose of a song resonates with all the cowgirls and cowboys. Who doesn’t love the idea of a noble rodeo king embarking upon a majestic trek? Amarillo is on George’s mind just as George is most certainly on ours.