An Introduction To Erykah Badu In 10 Songs 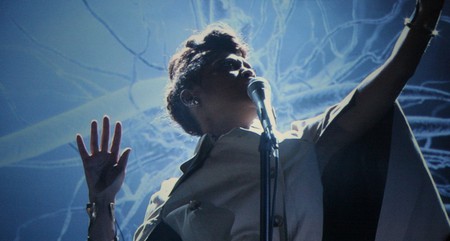 By the 1990s, hip hop had reached a precarious place. The genre was dividing into immeasurable amounts of subdivisions, and quickly became defined most by the separation between “gangsta” and “conscious” rap. As such, one of the most influential movements of the hip-hop genre throughout this decade was the Soulquarian movement, whose sound aimed to capture the musical and political essence of both early hip-hop and soul. While the movement featured incomparable rapping and the kind of lyrical intelligence that is still unmatched to this day, one of the most defining voices of the entire movement came from soul singer Erykah Badu.

Although she has never been a rapper per say, her lyrical and musical abilities were just as empowering as any other artist of the movement. Erykah Badu has developed a deep and enriching musical career endorsing feminism, creative liberty, and sociopolitical progressive movements, like the Five Percent Nation. Here are 10 songs to help dissect her musical prowess.

This song is possibly the greatest proof of the searing smoothness Erykah Badu has come to be known for. While the track drifts on a cool, laid-back soul groove, the song humorously drops all sorts of Five Percent Nation philosophies and intense calls for self-empowerment. It’s always good to be reminded that a smooth song is not always lighthearted.

Set to what sounds like the greatest free-flowing song Marvin Gaye never wrote and Sade missed out on, Badu feeds self-empowerment and confidence to this ‘bag lady’ carrying the baggage of her former relationships and all of the mistreatment that came with them. ‘All you must hold onto, is you.’ Couldn’t really be put any better, honestly.

The new decade had a strong impact on Erykah Badu’s music, and none make it more evident than ‘Love of My Life.’ Decidedly more upbeat and referential to hip-hop musically than previous outings, this song effortlessly ties together the long-running theme of love and hip-hop being one throughout the Soulquarian era Badu was so intimately apart of. Badu personifies hip-hop as the ‘love of her life,’ featuring reference to The Roots’ ‘Act Too (Love of My Life)’ and actually featuring Common, the mastermind behind ‘I Used to Love H.E.R.’ While the song is certainly of the neo-soul aesthetic, it is just as catchy as any radio hit, proving Badu’s much-deserved leadership in hip-hop culture.

As careers move along over time, many artists lose the edge that once made them vital voices in music in the first place. If anything, Badu has done the opposite, and that kind of progressive edge comes forward especially in ‘Soldier.’ Five minutes is all she needs to berate systematic oppression and attack police brutality, all without raising her emotions beyond her signature, silky-smooth vocal, which is more of a testament to the strength of her lyricism than anything else.

Nothing like an ode to being in the right place at the wrong time. Chimes, woozy guitar leads, and sensual bass licks – sounds like the perfect musical setting for a killer R&B love song, but in her wonderfully complicated way, Erykah turned the entire love song concept on its head and wrote a song about the beauty of having a love that’s just close enough to be a tiny bit too out of reach. What a shot to the heart.

Lyrically speaking, ‘Honey’ follows many of the same themes as Badu’s previous work, but the real catch in how incredibly poppy and vital the song itself is. Far from the low and slow mood music she dominated in the late 90s and early 00s, ‘Honey,’ is packed to the brim with beefy synths and the kind of energized funk born from trailblazers like James Brown. Overall, the song sounds like the poppiest song Dr. Dre could ever put together, and the results are fantastic.

Even coming off of Baduizm, tracks like ‘Didn’t Cha Know’ kept proving Badu’s insane songwriting talents. The song is just loaded with memorable vocal hooks and intoxicating rhythms, and her masterful wisdom of love comes shining through with lyrics ‘love is life, and life is free.’With songs like these, Badu proves that she is a woman wise well beyond her years.

Even though it has certainly happened before, it never fails to surprise when an artist as big as Erykah Badu writes a hit about wanting to get away from their own fame and success. Out of her most recent material, ‘Window Seat’ feels the most in line with the music of Mama’s Gun and Baduizm, but the earnestness in her voice is on an entirely new level with this song. It’s hard not to feel the gravity of an artist’s desire for solitude, and the fact that Badu could take that sentiment and flesh it out into such a beautiful song speaks volumes to her creative and personal integrity.

Never has the Five Percent Nation sounded so beautifully romantic. On this slow burner, Badu likens the harmonious nature of her partner and herself to the rays of the Sun and the reflective nature of the Moon. Both pertinent representations of the man and woman in ‘Fiver Percenter’ philosophy, the synchronicity of the ‘knowledge’ of the Sun mixed with the ‘understanding’ of the Moon, or the combination of Badu and her partner, results in a powerful and beautiful ‘Orange Moon.’ Evoked over spastically enthusiastic flute and piano soloing, the idea of love as power simply cannot be missed.

Out of all the strangeness that has come out of Badu’s extensive career, ‘Phone Down’ is easily the most left-field project she’s dropped to date. Part of her experimental mixtape But You Cain’t Use My Phone, the song conjures the darker sides of Drake and challenges even the youngest and brightest production talents of modern hip-hop. Even more impressively, the entire song revolves around a harrowing synth pad and the kind of individual prowess that can make anyone put their phone down. Erykah isn’t going to ever going to become irrelevant.