A Look Inside Dallas’ Underground Tunnels 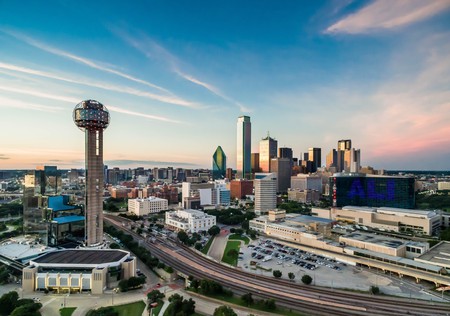 Deep below the bustling streets of downtown Dallas, a labyrinth of underground tunnels weave and curve beneath one of the most dynamic areas of the city. Unknown to many locals, the Dallas Pedestrian Network connects many of downtown’s biggest skyscrapers, businesses and residential buildings.

Comprising three miles of tunnels and sky bridges, the Dallas Pedestrian Network was the brainchild of urban planner Vincent Ponte. Starting in 1969, his plan influenced development in Dallas throughout the 1970s and 80s by including underground tunnels and passageways for residents and visitors to get around downtown without suffering from rain or extreme Texas heat. In the 90s, the tunnels were blamed for the significant loss of foot traffic and, ultimately, the economic downturn of many stores and businesses on the street level of downtown Dallas.

Today, the tunnels still exist, but not in the way originally envisioned by Ponte. Parts of the tunnel system have been shut off due to building closures and new development plans, while others are now privately owned, requiring a key to enter. The tunnels are also closed on the nights and weekends, meaning the only time to explore the tunnels is during the busy downtown workweek. All of this to say, they’re still an attraction worth checking out.

A fascinating aspect of Dallas that most locals and travelers don’t know about, the tunnels offer a fun weekday exploration. The most common entrances are at Thanks-Giving Square, Renaissance Tower, One Main Place and Bank of America Plaza, though they can be a bit hard to find as most buildings won’t have signs. Generally, entrances can be found by taking the elevator to the garage or looking for a set of stairs that goes down past the street level. Luckily, maps can be found that provide looks at which tunnels are accessible. 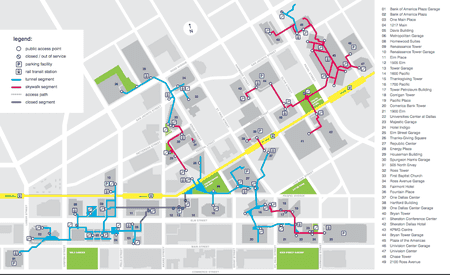 Once inside, the tunnels are air-conditioned and well-kept, as many office workers in downtown Dallas still use them to get around. Explorers can check out tunnels containing local art and small businesses before grabbing a snack at one of the city’s subterranean foodcourts and heading above ground to explore the best attractions Dallas has to offer above ground.