The Film Buff's Guide To Texas 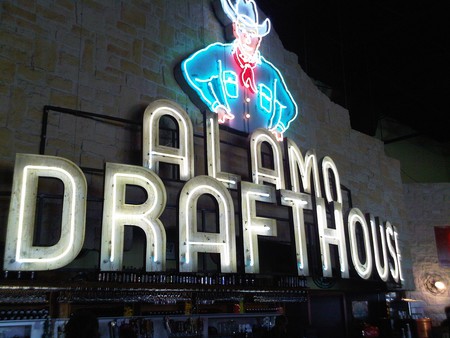 For a movie buff, movies are more than just an entertaining experience. Movies are life. Whether you’re an avid filmgoer, filmmaker, or a hardcore movie buff, Texas is a great place to satisfy cinematic cravings. Complete with art house movie theaters, cinematic events and tons of iconic movie locations to visit, this list will walk through the ultimate movie buff’s guide to Texas. 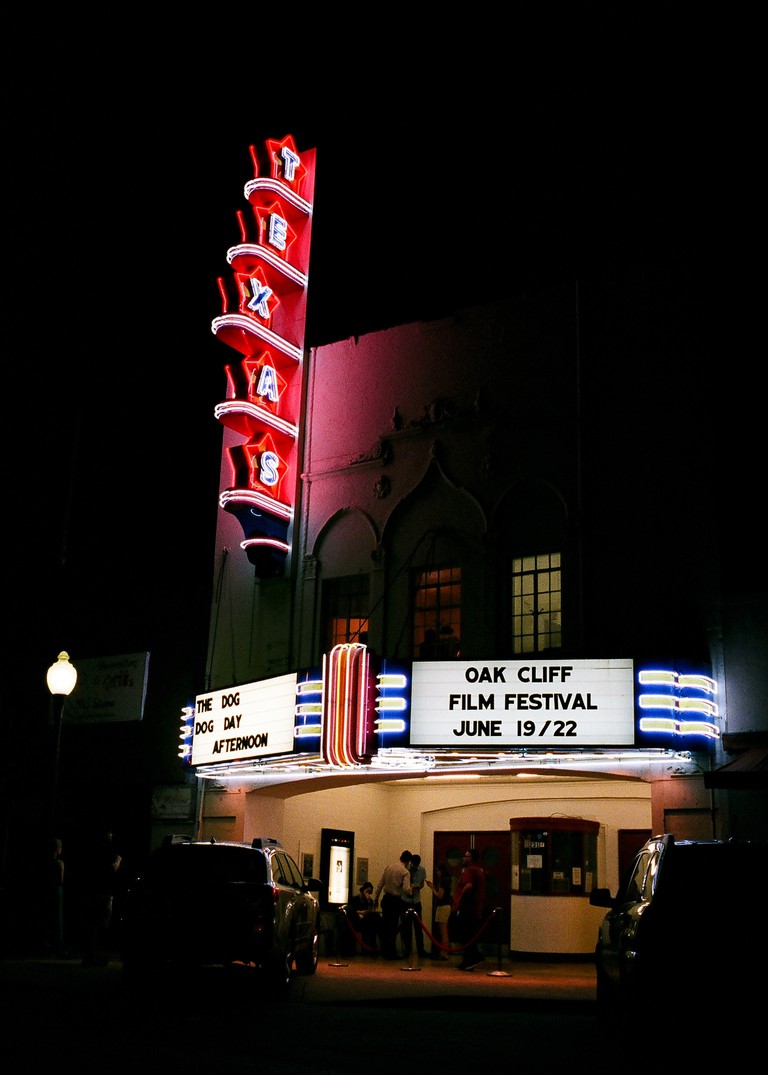 Texas Theatre is a historical landmark and spot to watch indie films | © Sean P. Anderson / Flickr
The Texas Theatre in Oak Cliff is truly a gem and stands as the location that Lee Harvey Oswald sought out for a hiding place after murdering Officer J.D. Tippit. He was then arrested. Oswald would later assassinate JFK. It has survived the times and has become a charming and renowned theater for the avid filmgoer. A director’s hall of fame shines beautifully in the lobby of the theater, of distinguished directors both old and new. In fact, it’s almost a mini film museum, showcasing old cameras and classic relics. The theater shows independent movies, film festivals, independent screenings, documentaries, old classics and 35mm films. Any movie buff would feel understood here.
Open In Google Maps
231 W. Jefferson Blvd, Oak Cliff, Dallas, Texas, USA
+12149481546
Visit Website
Give us feedback

The Angelika is another theater that appreciates filmmaking. They host several screenings, indie features, premieres and inspiring events to educate the thriving creative. In fact, on Tuesdays, they offer a discounted ticket for students, along with complimentary popcorn. And the broke college student rejoices! They have ‘Crybaby Matinee’ for parents with young ones that want to enjoy movies while catering to their needs. Next time you’re cruising through downtown Dallas, hit up the Angelika for an enjoyable experience – it’s a place that truly understands the needs of the movie buff. 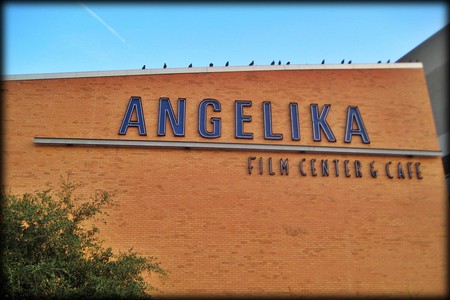 Movie Theater, Cinema
Facebook
Email
Twitter
Pinterest
Copy link
Share
Map View
The Alamo Drafthouse may be the most famous indie movie powerhouse franchise in Texas. Founded in Austin, they operate in Dallas/Fort Worth, Austin and several other locations around the state and the country. The original intention was to create a theatre by fans, for fans. Indeed, they enforce strict cinema-going etiquette so that movie lovers can have a genuine movie experience. They have several events, like ‘Quote-Along’ nights and ‘Master Pancake’ events, in which comedians mock an entire movie on the spot, and ‘Weird Wednesday,’ which shows eclectic movies for one dollar at midnight. With so many events and locations, there’s no excuse not to visit!
Open In Google Maps
320 East 6th Street, Downtown Austin, Austin, Texas, 78701, USA
+15128617020
Visit Website
Give us feedback 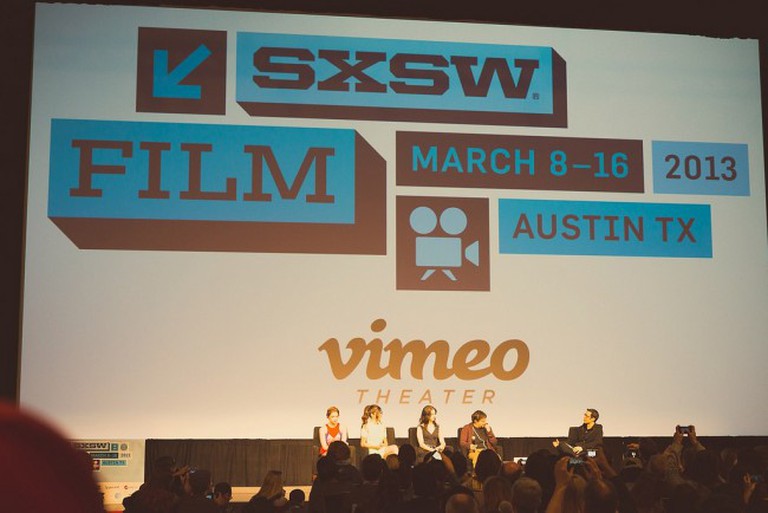 SXSW Film | © Riot Cinema Collective/Flickr
Perhaps one of the most prestigious film festivals in the world takes place in one of the weirdest and most wonderful cities – Austin. SXSW is also a music festival and hosts interactive events. So many great films and directors have been discovered at SXSW. It’s a great place to experience the new up-and-coming films that will make a mark on culture. It’s also common to see celebrities and renowned directors attending or speaking. It’s a great place for the up-and-coming filmmaker, but any lover of movies can have fun at this event. Experience conference sessions, attend screenings, and make the most of the networking opportunities.
Open In Google Maps
STE 1100, 1400 Lavaca Street, Downtown Austin, Austin, Texas, 78701, USA
+15124677979
Visit Website
Give us feedback 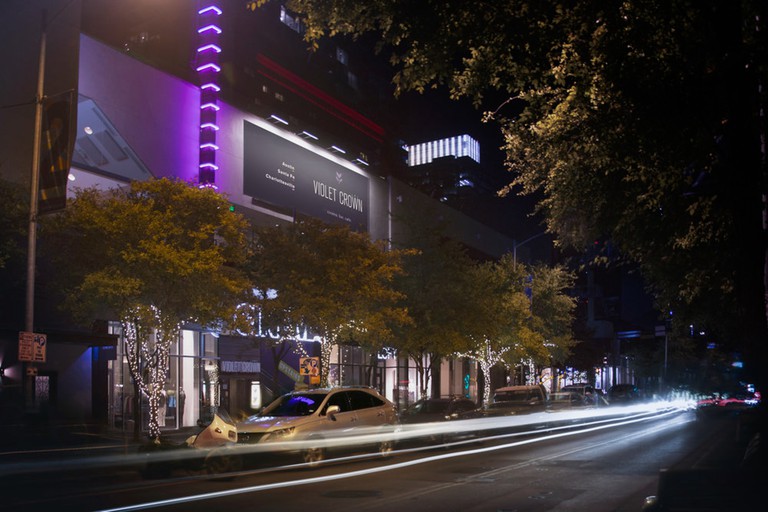 Headlights show the way to the Violet Crown movie theater | Courtesy of Violet Crown
An art house theatre devoted to showcasing independent, documentary, international and studio films, Violet Crown Cinema is locally owned and operated. They’ve got four screens inside, making it a charming place to appreciate the art of filmmaking. For the best possible experience, they offer wireless headsets that carry the movie soundtrack at an adjustable volume according to the needs of the viewer. They even have captioning devices that display subtitles in sync with the movie. This is truly a commodity that contributes to the perfect cinematic experience for all types of viewers.
Open In Google Maps
434 West 2nd Street, Downtown, Austin, Texas, 78701, USA
+15124959600
Visit Website
Give us feedback

From director Richard Linklater, this cult comedy classic tells the story of a group of teens in the 1970s that embark upon their last day of school before the summer. With its unique vibes and weird personalities, it’s really perfect that it’s in Austin.

When a female agent (Sandra Bullock) gets thrown into a beauty pageant, she experiences a dramatic character change, not only saving the day but also finding herself.

Texas sure has worked its charm on the Coen brothers. This mystery/thriller follows the path of Llewllyn Moss (Josh Brolin) who comes across a couple million dollars and runs from a ruthless killer (Javier Bardem) desperate to track him down.

The opening scene in which Moss finds the money is shot in West Texas in the town of Marfa, off I-90 about 400 miles west of San Antonio. It’s right off Big Bend National Park. Nothing screams dry open wasteland like that, but then again, it’s the perfect spot for the scene.

The Coens’ affinity for Southern culture and dialogue certainly earns them some good old-fashioned respect.

This iconic indie, starring a young Leonardo DiCaprio and Johnny Depp, has certainly achieved cult status for many fans. It gives the audience a glimpse of the life of Arnie Grape (Leo) and how his brother Gilbert (Depp) struggles and strives to make life possible.

Although the story takes place in the fictitious town of ‘Endora, Iowa,’ it’s set right here in Texas, specifically in the town of Manor, which is just east of Austin. The famous water tower that Arnie repeatedly embarks upon stands at the intersection of Old US-290/Parsons Street and South Lexington Street, behind Duett’s Tire Service, 106 W Parsons St, Manor, TX, USA.

Last but not least, this iconic Texas film focuses around a group of friends who encounter a crazy killer and must struggle to survive. As the tagline suggests, ‘Who will survive, and what will be left of them?’

Visit the actual Texas Chainsaw Massacre house in Kingsland, Texas. It has moved around, but it now stands as a restaurant: Grand Central Café, located at 1010 King Court, Kingsland, TX, USA. The gas station featured in the movie, ‘Bilbo’s Texas Landmark,’ is located at 1073 State Highway 304, Bastrop, TX, USA. According to Google Maps, it doesn’t seem to be operating anymore, but the building still stands.

With the power of film only getting more powerful and more exciting, the film community and locations to cultivate its growth will only grow and expand. Keep an eye out for new spots and places, and never stop exploring!