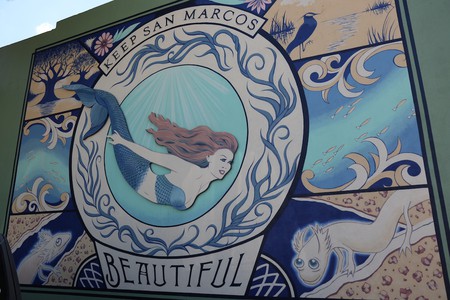 When most people think of mermaids, Texas Hill Country likely isn’t the first place that comes to mind – but the region is home to aquatic lore and a river so turquoise it could be mistaken for the Caribbean.

San Marcos and its namesake river serve as the heart of mermaid culture in Texas, which draws from deep local history for festivities, art and a full-fledged mermaid society.

The San Marcos River has long been a centerpiece of Hill Country, as a recreational destination for swimming, kayaking, paddleboarding and even snorkeling. Thanks to the turquoise tint and crystal-clearness of the water, due largely to the Edwards Aquifer where the river rises from, the waterway looks more like a tropical beach. It spawned its very own mermaid mythology, starting with a now-defunct theme park called Aquarena Springs.

Inspired by these “tropics,” the park featured an underwater theater with mermaids, or “aquamaids” as founder A.B. Rogers called them. Though Aquarena Springs shuttered in 1994, the Mermaid Society of San Marcos was formed as a way to bring the finned beauties back into local tradition. 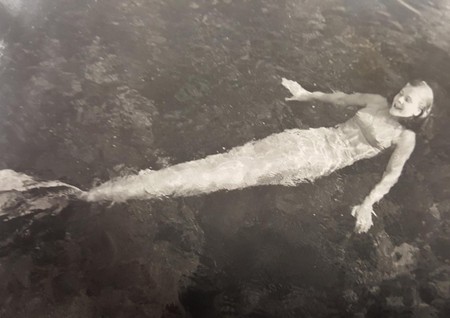 Mermaids first made a splash at Aquarena Springs, a defunct theme park with an underwater performance theater | © Mermaid Society of San Marcos

The Mermaid Society of San Marcos

With the intent of preserving local history and highlighting river conservation efforts, July Moreno christened the Mermaid Society of San Marcos in 2016.

Throughout the year, the society hosts volunteer events focused on cleaning the river, along with a big annual fete called Mermaid SPLASH (Stewardship, Preservation, Local, Arts, Sustainability, Heritage). The September event is a two-week spree of entertainment, activities, a parade, music and more. Highlights of the festival include the “Mer-Tini Shakedown,” a mermaid-themed cocktail competition among San Marcos bartenders using local spirits, and the parade. The latter runs by the river in downtown San Marcos, with music, floats, art and – of course – lots of smiling mermaids.

Taking things full-circle back to where it all began, the Mermaid Society Art Ball takes place at the Meadows Center for Water and the Environment, an educational conservation center on the grounds that once held Aquarena Springs. The ball looks like something out of a Disney movie, with hundreds of attendees clad in mermaid-inspired gowns as they dance near the shores of Spring Lake.

At the end of the SPLASH festival, the society hosts a community cleanup at the river, ensuring the overarching vision of the organization remains rooted in conservation. 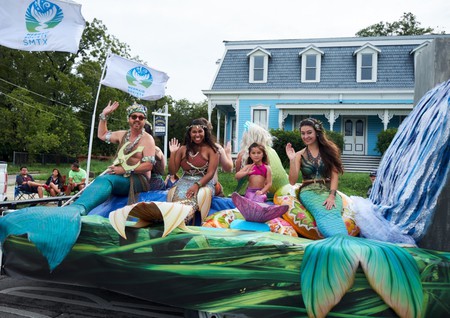 For anyone who doubts the legitimacy of San Marcos’ mermaid scene, a visit to the annual festival will prove that real live mermaids swim among us.

Sirenalia is a mermaid production company based in nearby Austin, which designs shimmering, silicone-based tails and trains performers for events, parties and festivals like the one in San Marcos.

Not only do these mermaids participate in parades, but they enter the water to help clean up parts of the San Marcos River. In September, mermaids from Sirenalia partnered with Eyes of San Marcos River to perform what they billed as the world’s first underwater mermaid river clean-up effort. 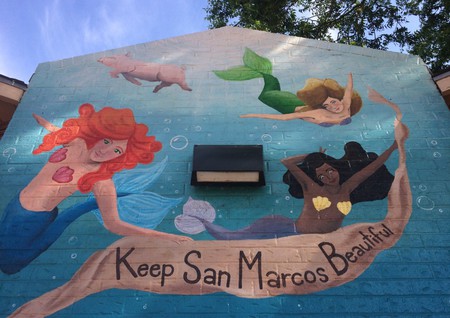 Inspired by the success of the Mermaid Society and its events, San Marcos has fully embraced its aquatic history and unveiled a new series of mermaid art pieces throughout town.

The crown jewel is the recently installed Mermaid March, a series of 10 massive mermaid sculptures scattered around the city. Each mermaid is uniquely designed by different artists, like the “Blooming Brightly” mermaid decorated with local newspaper clippings, or “The Fish Of The San Marcos Waterways,” bedecked with images of native fish.

For San Marcos and the Mermaid Society, it’s part of an ongoing effort to create a unique local icon with meaning and history. In a city that’s hundreds of miles from the coast, Texas mermaids are changing perceptions, embracing origins and preserving a most unexpected tradition for generations of Texans to come. 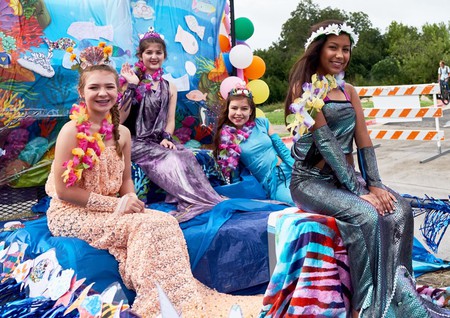 From art and performances to festivities and dances, there's a mermaid movement underway in Texas Hill Country | © Mermaid Society of San Marcos
Give us feedback