The Most Canine-Friendly Parks In Houston

As the truck rumbles up Highway 6, Hulk begins to pant heavily. Houston is in the middle of its dog days of summer and the temperature is sweltering outside. Hulk is a two-year-old Chocolate Labrador Retriever with a heavy, long fur coat. He loves to swim, and cool water is a welcome reprieve from the 100 degree heat. His sister, Hannah, is along for the ride too. She’s an eight-month-old boxer, and her gait resembles that of a doe. She relishes open spaces so that she can hop unabated with her tongue flapping in the breeze. 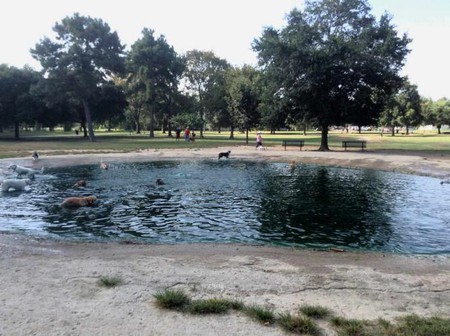 Houston has a sprawling metropolitan area (10,000+ sq miles/26,000+ sq km). There are over 20 public off-leash dog parks in Greater Houston. Here are some great parks that offer all of the necessary amenities to keep your pooch safe and happy, including double-gated entries, separate fenced ares for large and small dogs, swimming ponds, drinking fountains, plastic bag dispensers, and showering stations.

At 14 acres, Katy Dog Park has a paved pathway that curves around the perimeter, which is perfect either for parents with young children still in strollers or the exercise aficionado who likes to run while Fido plays. It also comes in handy when leash-walking a dog after a bath so that they can air dry before returning to the car.

There is one large pond toward the back. Mature trees dot the landscape and benches are conveniently positioned in the shade. A canvas canopy covers the showering stations so that the cement does not overheat. The water spigots resemble fire hydrants, and the water pressure is excellent. The one drawback is that the section for small dogs is…small. 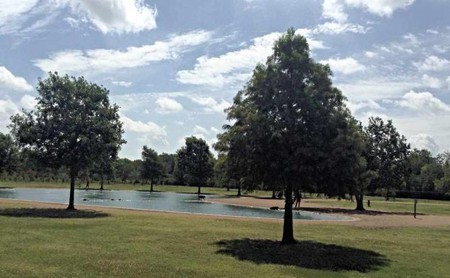 At Millie Bush Dog Park, there are three swimming ponds, with the large dog section having two. The two swimming ponds are positioned at opposite ends of the park with over 800 meters of open space in between. This is one of the most popular parks in the Houston area, and sometimes this can influence the quality of the visit due to overcrowding and owner spats. 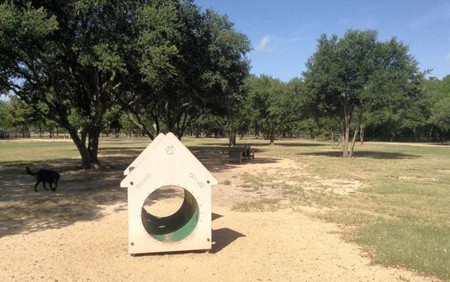 Congressman Bill Archer Dog Park is the largest off-leash park in Greater Houston with 20 fenced acres. It has a limestone walking trail, two bone-shaped swimming ponds, and agility equipment. Half the area is dedicated to the agility equipment, which is in the back of the park, and most owners don’t use it; therefore, all the activity is near the front of the park by the swimming ponds. While that isn’t a big surprise considering the summer heat, the developers could have made better use of the space. There’s more natural shade at Bill Archer than Millie Bush, but Millie Bush gets a higher mark due to its layout. 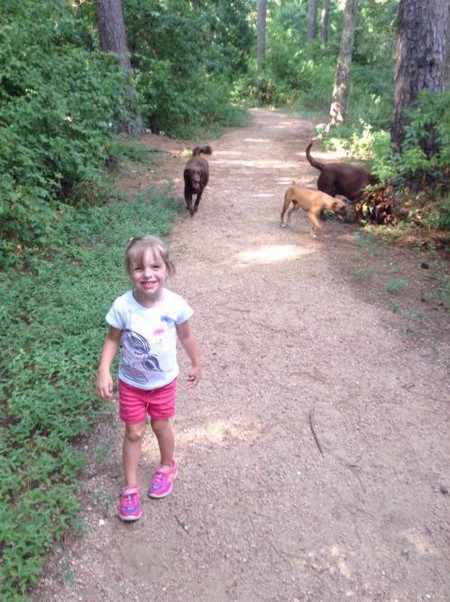 While this park is much smaller (four acres) than the previous three parks, it has a true nature trail with a limestone path covered by a canopy of pine trees. There’s easily a 10 degree temperature difference between the open area and the nature trail during the late afternoon. Another dog owner of three chocolate labs said he’s experienced other owners who bring dog breeds often described as ‘more aggressive’ to this park. While the swimming pond is usually in good shape, it can get messy and overgrown at times. 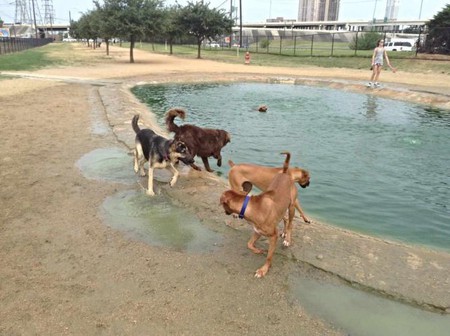 This park is one long alley with a swimming pond in the middle. Power lines decorate the sky above. There’s generally a decent crowd no matter the day as it’s inside Loop 610 and close to the Galleria. Although the space is small, it has all the necessary amenities to keep the dogs entertained. The confined area also presents more opportunities to interact with other dog owners.