14 Reasons You Should Visit Dallas 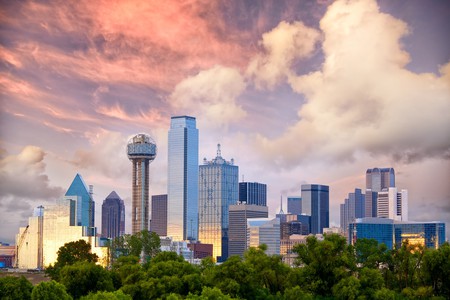 As one of the fastest growing cities in the U.S., Dallas is starting to attract more and more visitors. Whether it’s a weekend getaway or a week vacation, here are 14 reasons to visit Dallas.

Mention Dallas in countries around the world and people can’t help but say, “Like the TV show Dallas?” The answer is no; Dallas isn’t really like Dallas or any other pop culture film or TV show. Sure, there’s a small pocket of the Western culture seen in Dallas or Walker Texas Ranger and the upscale scene of The Real Housewives of Dallas, but visitors often find that Dallas is less stereotypical Texas than not. It’s a metropolitan city with a diverse population of people from all over the world, a large business and cultural sector, a thriving nightlife, and a growing arts and music scene.

Shopping is no joke in Dallas. The Dallas-Fort Worth metroplex has more shopping centers per capita than any other city in the U.S. Dallas alone is home to the Neiman Marcus flagship store, and the oldest shopping center, Highland Park. Whether it’s NorthPark Center, Galleria Dallas, or the West Village shopping center, Dallas has an abundance of shops and stores to meet all your fashion needs. 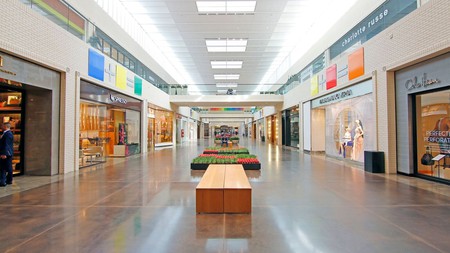 Texas is known for Tex-Mex and barbecue and the same can be said of Dallas. Barbecue joints like Pecan Lodge run out of barbecue nearly on a daily basis, while Taco Tuesdays are seriously adhered to with the complements of queso and frozen margaritas. Yet, Dallas is home to a big foodie scene beyond Tex-Mex, barbecue, Southern soul food and steaks. It’s visible in the popular Jamaican food joint, Elaine’s Kitchen, the thriving restaurant marketplace of Trinity Groves, and the Taste of Dallas food festival that draws tens of thousands each summer. Dallas is making waves in the food scene. 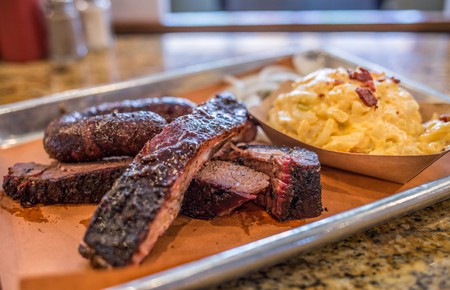 Sports are a big deal

Dallas-Fort Worth is home to five major professional sports teams – the Dallas Cowboys, Dallas Stars, Texas Rangers, FC Dallas and Dallas Mavericks. It’s safe to say that sports are huge in Dallas. Add in the city’s college and high school teams and the Red River Showdown between OU and the University of Texas at Fair Park every year, and Dallas is arguably the epicenter of sports in Texas. 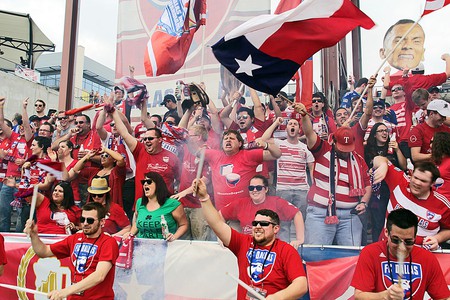 Dallas is often overshadowed in the realm of Texas history by places like San Antonio and the Alamo. Established in 1841, Dallas has been making waves in terms of history with inventions of things like the microchip and laser tag, the founding of 7-11, and the creation of the term “Super Bowl.” Figures like Bonnie and Clyde, Doc Holliday, and Huddie “Leadbelly” Ledbetter all have a place in Dallas history. Perhaps, the most significant aspect of Dallas history is as the place where John F. Kennedy was shot. While Dallas’ history isn’t always pretty, there’s plenty to learn about Dallas and its history in the amazing museums throughout the city.

Dallas might not be known as a hip art destination, but that’s changing. Dallas is home to the Dallas Art District, the largest in the U.S. that spans 68 acres (27.51 hectares) and covers 19 blocks in downtown Dallas. Not to mention, Dallas has the Dallas Art Museum, one of the 10 largest art museums in the U.S. with 24,000 works of art. Neighborhoods like Deep Ellum, Oak Cliff and the Design District are alive with contemporary art galleries, rotating graffiti walls, pop up shops, and art festivals like the Deep Ellum Arts Festival. 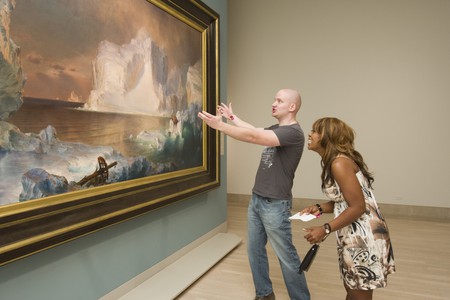 Dallasites love to be outdoors whether it’s having a coffee or a meal on the many (dog-friendly) patios, the numerous rooftop bars or in the green, bountiful parks that attract visitors every day. Klyde Warren Park and White Rock Lake are the two most popular green spaces in Dallas. Trinity River is being developed into a 10,000-acre (4,046-hectare) nature district that will be 12 times as large as Manhattan’s Central Park. Altogether there’s 22,000 acres of parks and 125 miles (201 kilometers) of hiking and biking trails, proving that Dallas is an outdoor-friendly city. 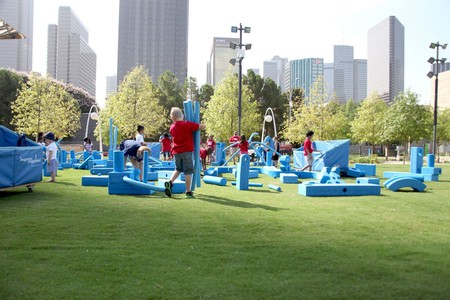 Bar-hopping isn’t just a term in Dallas, it’s a common nightlife practice. Many of the neighborhoods of Dallas have their own strip of bars that make it easy to bar hop between. McKinney Avenue in Uptown is lined on both sides with upscale or college-friendly bars. Lower Greenville plays host to a laid-back group of bars, while Oak Lawn or “the Gayborhood” caters to the LGBT bar scene. Perhaps the most popular scene right now is Deep Ellum, offering a mix of live-music, dive and upscale bars that are easy to bar-hop for free.

Dallas’ population is nearly 43% Latino, and in 2012, Dallas-Fort Worth was ranked as having the sixth-largest Hispanic population in the U.S. The heart of the Latino community has always resided in Oak Cliff but is apparent in other areas like East Dallas. It’s clear in the restaurants like Gonzalez Restaurant, the grocery stores like El Rio Grande Latin Market or Fiesta Mart, monthly literary events like Lucha Dallas, salsa nights at Gloria’s and in big celebrations for Dia De Los Muertos, Cinco De Mayo and #214Selena. 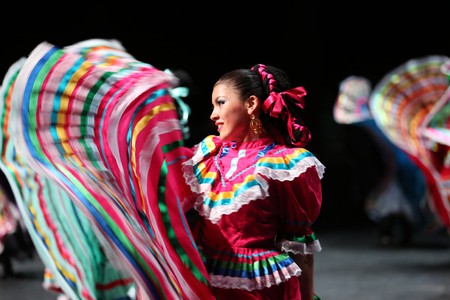 Dallas may be an amalgamation of people from all over the world, but like any good Texas city, Dallas locals are very kind to newcomers and visitors. Be prepared to have a genuine conversation with the clerk at Trader Joe’s or be welcomed by strangers at bars. Hotel receptionists will profusely apologize for making you wait for more than five minutes to check in and people walking on sidewalks will say hello and move over when you pass. Most neighborhoods have home associations that bring residents together for block parties and events throughout the year, often inviting outsiders to join in on the fun. Visit Dallas – it’ll be one of the kindest travel experiences you’ll have.

Austin may have South by Southwest, but Dallas has a long history of live music. Though concerts can be enjoyed at large venues like American Airlines and Starplex Pavilion, Deep Ellum has been the epicenter for live music since the ’20s. Blind Lemon Jefferson, Bessie Smith, Huddie “Leadbelly” Ledbetter and other famous jazz and blues musicians put Deep Ellum on the music map. Later, venues like Trees, Club Dada, The Bomb Factory and Deep Ellum Live played integral parts in the early careers of greats such as The Flaming Lips, Nirvana, Toadies and Pearl Jam. The music scene is still thriving in Deep Ellum today, attracting diverse bands and music listeners each week for new, old and upcoming tunes. 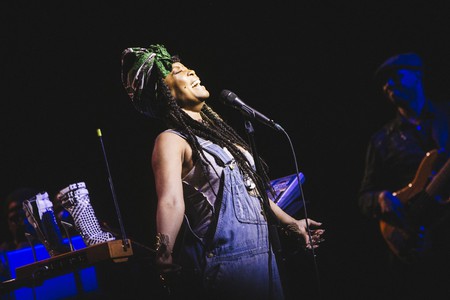 Traveling to Dallas is relatively cheap with a $103 average daily cost. Compare that to New York City at $229 or Austin’s average daily cost of $371, and Dallas is the perfect place for the budget traveler. A hotel can be booked for about $115 a night, a beer costs anywhere between $3 and $7 and meals range between $7 to $15 on average. Don’t forget all the free attractions that Dallas offers, and it’s clear that a buck goes a long way in D-town.

Home of the Texas State Fair

Dallas welcomed the Texas State Fair in 1887, and since then, it has become an integral aspect of the city’s tourism. In 2017, the fair welcomed 2.25 million visitors to a month-long extravaganza that offered trade shows, amusement rides, live concerts, agriculture exhibits, sports events and a famed-selection of food. Visitors to the Texas State Fair are often overwhelmed by highlights that include tastings of Fletcher’s Corny Dog (which boasts itself as the inventor of corn dogs), gigantic turkey legs and Fried Oreos, a ride on the Texas State Ferris Wheel, and a selfie with Big Tex, the de facto mascot that stands at 55 feet high and has made multiple movie cameos. 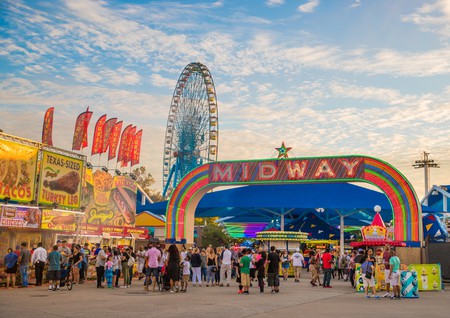 Midway at the State Fair of Texas │Courtesy of VisitDallas

Skyline lovers – eat your heart out in Dallas. The Dallas skyline gained international recognition thanks to Dallas and other hit TV series, but has since grown to include interesting architecture like the colorful rotating Reunion Tower, the green neon lighting of the Bank of America Plaza Building or the pointy top of the Fountain Place skyscraper. In 2014, it was even voted the Best Skyline in the World by readers of USA TODAY. Dallas’ skyline is real, it’s beautiful and it’ll be burned in your mind forever. 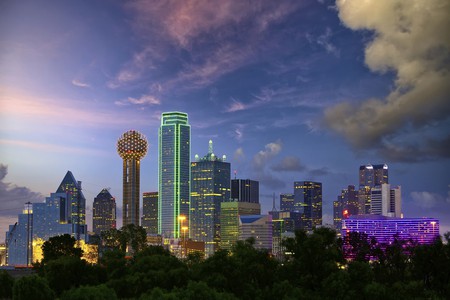 Dallas skyline at night │ | © Dibrova/Courtesy of VisitDallas
Give us feedback