Cadillac Ranch | © scott1346 / Flickr
Texas boasts a lot of unique, random, and downright weird attractions throughout the state. Check out these 11 quirky destinations next time you want to see a different side of the Lone Star State.

Museum
Austin's Cathedral of Junk was constructed by artist Vince Canneman | © Dennis Cox / Alamy Stock Photo
Austin is known for keeping it weird, and this eclectic “museum” certainly falls into that category. Vince Hannemann began collecting random items and pieces of trash in 1989, and he continues to build upon this shiny structure in his backyard. Call ahead if you want to visit, and be sure to make a donation to his project to preserve the weirdness.
More Info
Open In Google Maps
4422-4424 Lareina Drive, South Austin, Austin, Texas, 78745, USA
+15122997413
View menu
Visit website
Visit Facebook page
Send an Email
Give us feedback

Built in 1974 by Stanley Marsh 3 and members of a San Francisco art collective, The Ant Farm, Cadillac Ranch is ever-changing due to the invitation of graffiti additions by visitors. There are 10 old Cadillacs sitting upright in the middle of a field off of I-40, a welcoming site to an otherwise drab road trip through North Texas, and the cars are said to point at the same angle as the Pyramid of Giza in Egypt. 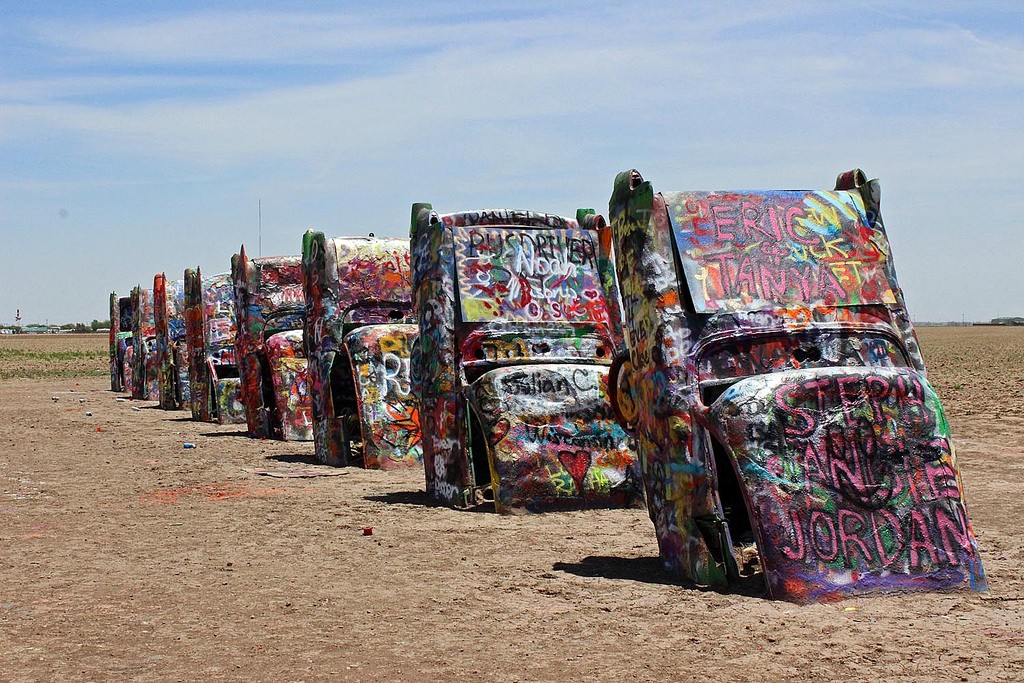 Stonehenge II is not the only famous landmark replica in Texas, but it’s certainly one of the strangest, with Easter Island Moai statues added two years after the original unveiling. This version of Stonehenge is 60% of the original’s size and made of plaster and wire mesh. The purpose of the installation was to show what Stonehenge would look like without the erosion that caused the stones to fall where they are today. 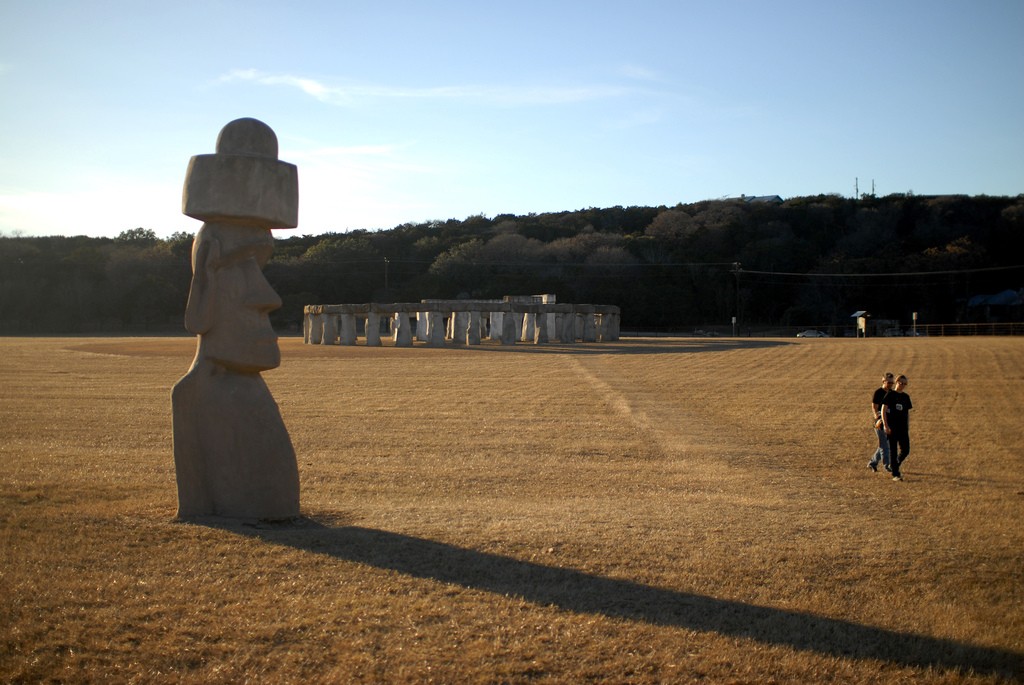 Bridge
Crowds gather at the Congress Avenue Bridge during the warmest months to view an odd natural occurrence: thousands upon thousands of bats ascending into the night sky to hunt. Austin is home to the world’s largest urban bat colony, with an estimated 1.5 million bats living in the area. You can watch this occurrence from upon the bridge, or take a bat cruise on the Colorado River.
More Info
Open In Google Maps
Congress Avenue, Austin, Texas, 78704, USA
View menu
Visit website
Visit Facebook page
Send an Email
Give us feedback

Building, Store
‘Prada Marfa’ is the brainchild of artists Elmgreen and Dragset | © Mike Graczyk / AP / REX / Shutterstock (6289474a)
Marfa has become Texas’s hipster haven, and no trip is complete without a visit to the less-than-glamourous Marfa version of the luxury store Prada. Berlin artists built the installation with biodegradable materials so that the building will slowly disappear, a commentary on Western materialism. It originally opened in 2005 and was nearly immediately broken into before they added more security and cut the bottoms out of the real Prada bags housed inside. While you’re nearby, check out the Marfa lights, another unique West Texas attraction.
More Info
Open In Google Maps
14880 U.S. 90, Valentine, Texas, 79854, USA
+14327293600
View menu
Visit website
Visit Facebook page
Send an Email
Give us feedback

Burnt orange is a commonly beloved color around much of Texas, thanks to the many diehard University of Texas fans. One man took his love of oranges (the fruit, not the color) to the next level by opening The Orange Show, a 3,000-square-foot (278.7-square-meter) monument that took over 20 years to build by himself. The Orange Show is a space for art events, as well as the preservation of other local treasures. 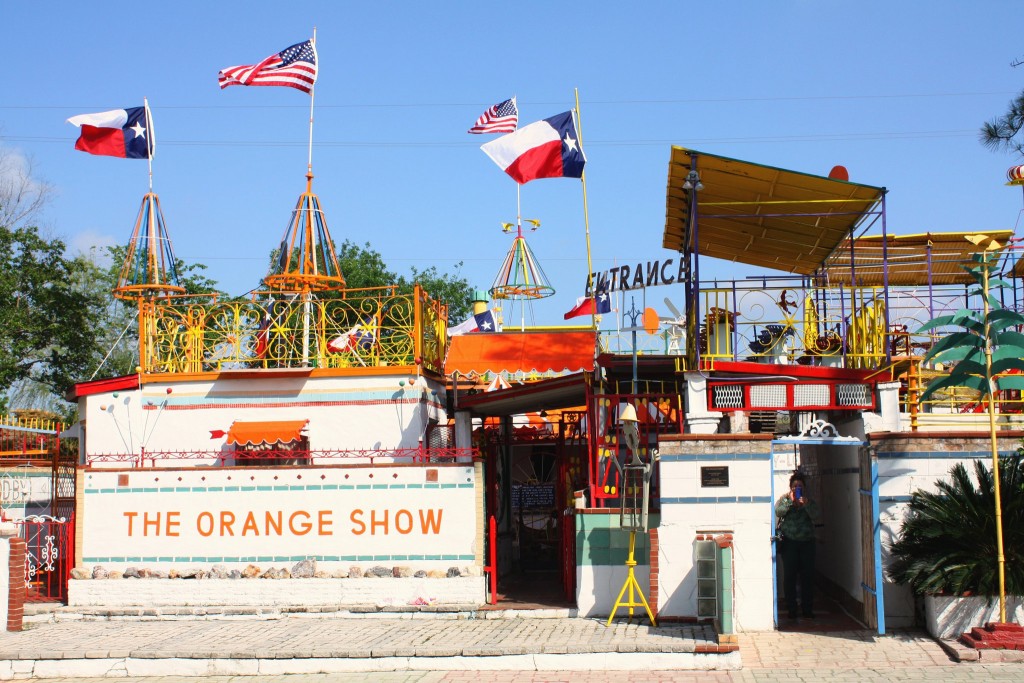 In a small town called Aurora in the late 1800s, rumor has it that a UFO crashed, leaving behind the body of a small Martian pilot. Locals buried the body under a tree at the cemetery, and the legend of the alien continues to be passed down through the generations. Though someone stole the alien’s headstone, you can still read a historical marker near the site to get the full details.

Barney Smith spent his pre-retirement days as a plumber and carried on his passion by opening the Toilet Seat Art Museum. He collected used toilet seats and painted and adorned each one himself to become a unique work of art. You can even bring your own toilet seat to the museum when you visit, and he will engrave your name on it before adding it to his collection. 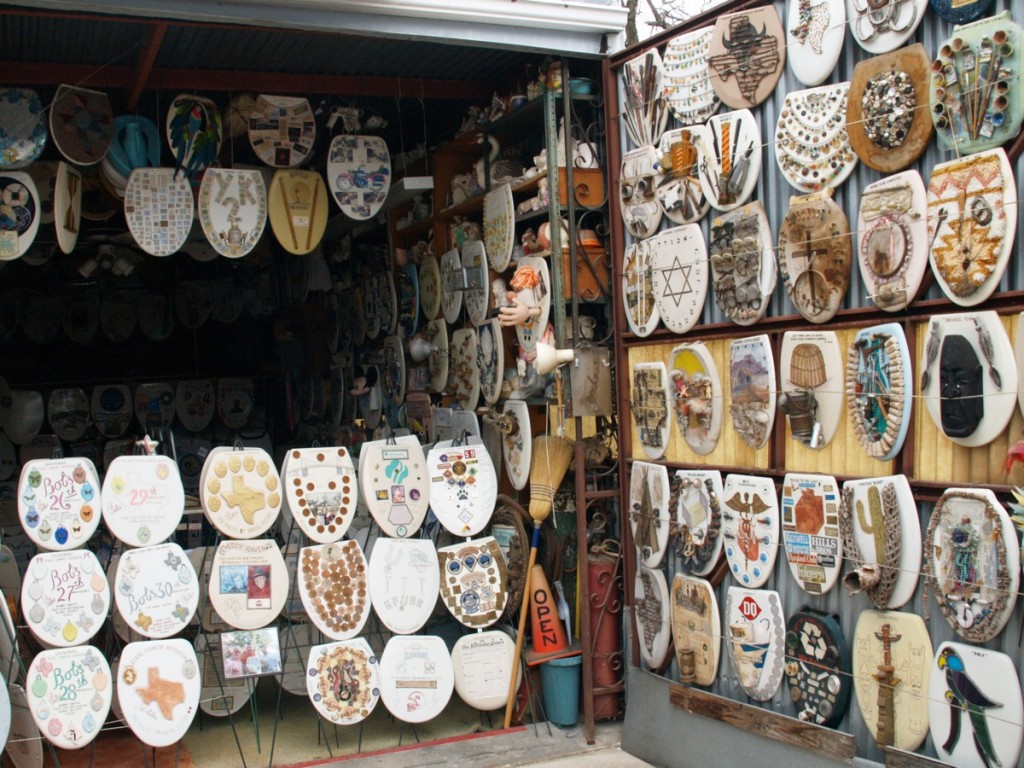 Some buttons are just begging to be pressed. The unmarked red button on Houston’s Preston Street Bridge has no signage, but it invites any curious passerby to press it, which forces the bayou below to begin bubbling. This installation has an ecological purpose, as it keeps the water oxygenated and, therefore, less stagnant and smelly than it would normally be.

Ozymandias of The Plains

Another work by eccentric millionaire Stanley March 3, this sculpture too sits near Amarillo and pays homage to Egypt in another strange way. Ozymandias is the name the Greeks gave Pharaoh Ramesses II and was also the title of a famous poem written by Percy Shelly after she visited the Egyptian ruins. These lines of the poem were the inspiration behind the installation’s peculiar visuals: “two vast and trunkless legs of stone. Stand in the desert.”

Ozymandias of The Plains, I-27 and Sundown Lane, Amarillo, TX, USA 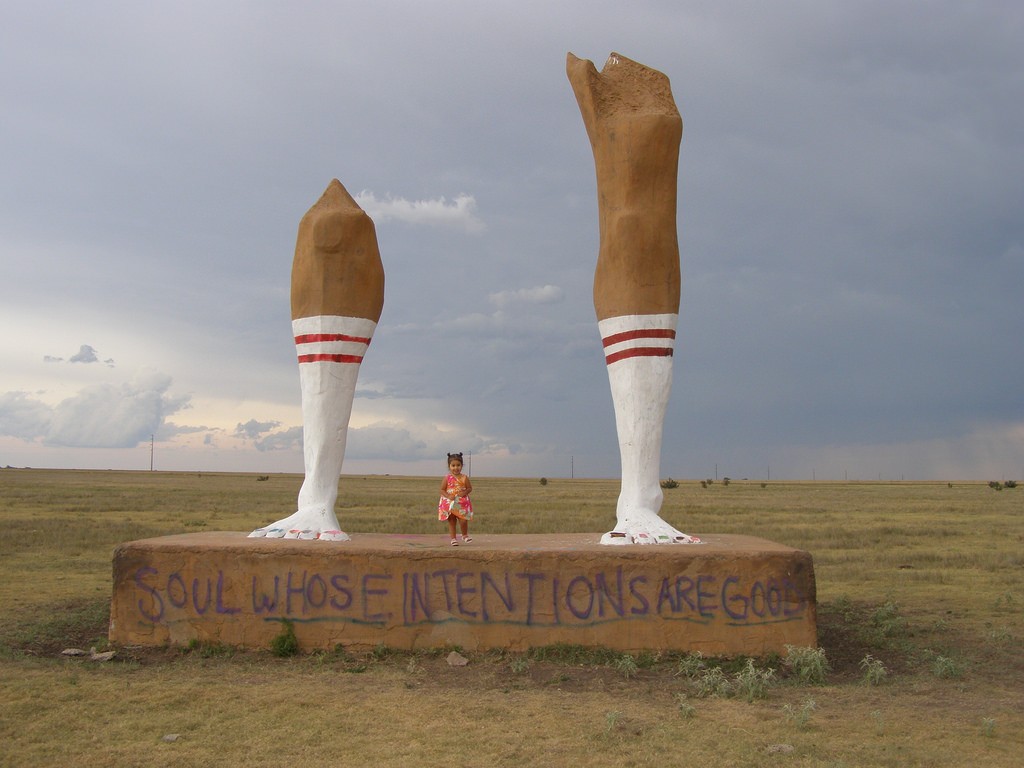