There’s a long-standing motto that ‘Everything’s Bigger In Texas.’ While the following statement may not accurately stand for all things Texan, it certainly stands true for the Texas State Capitol. Hidden within the large landmark lies fascinating facts about the capitol’s legacy you may not know.

In reference to square footage, the Texas Capitol is the largest State Capitol in the United States. 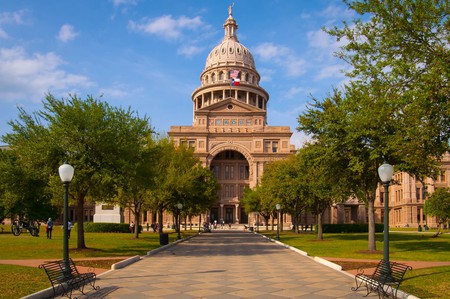 In 1993, a $75 million underground extension was added to the building. The extension spans more than 650,000 square feet and contains eight skylight courts, adding a plethora of natural light in the capitol’s addition.

In 1853, a grand Texas Capitol stood tall after completion only to burn down in The Great Capitol Fire of 1881. Construction of the new capitol followed quickly, and in 1888, the building took shape. However, an electrical fire in 1983 severely damaged the official chambers, prompting the capitol’s ten-year restoration, turning it into the structure we know today. 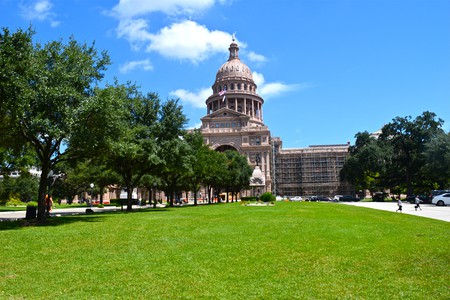 The main capitol builders, John V. Farwell and Charles B. Farwell, were paid with three million acres of land. Not a bad deal considering they later turned it into one of the largest cattle ranches in Texas. 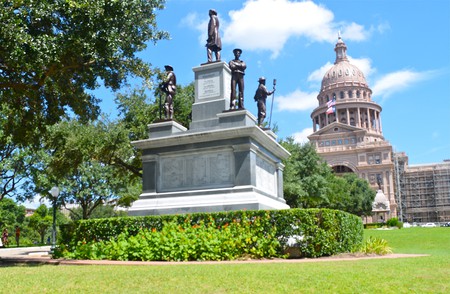 There were thousands of men working to build the capitol. Many of these men were convicts and migrant workers.

The Voice Echo In The Rotunda

The Rotunda is a circular room with portraits of former Texas governors and past presidents lining the curved walls. The echo in the room is magnificent, and in certain places throughout the space, it sounds like your voice is blasting through a microphone.

What used to be the General Land Office Building is now the Capitol Visitors Center, where an interactive exhibit is located. You can dress up as Texas cowboys, early pioneers, or try out posing as the Goddess of Liberty, and learn what it took to build such a monument. 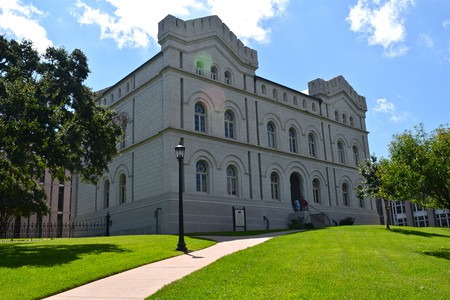 Along the wall in the Rotunda hangs a picture of Miriam Ferguson, the first woman governor of Texas. She started serving in 1925 and held office for a total of five years. Her husband served as governor from 1915 to 1917 but was impeached during his second term; he was not allowed to hold office in Texas ever again. Interestingly enough, Miriam won the election after ensuring the people she would follow the advice of her husband.

The Goddess of Liberty

The statue on top of the State Capitol is The Goddess of Liberty, and her very existence up there is said to make the Texas State Capitol taller than the US Capitol.

On the floor of the Rotunda is a circular collection of seals representing the six flags that have flown over the state. The seals stand for Texas under Spain, Texas under France, Texas under Mexico, and Texas under the Confederacy. In the middle is a seal standing for Texas in the United States, with oak and olive branches painted to symbolize strength and peace. 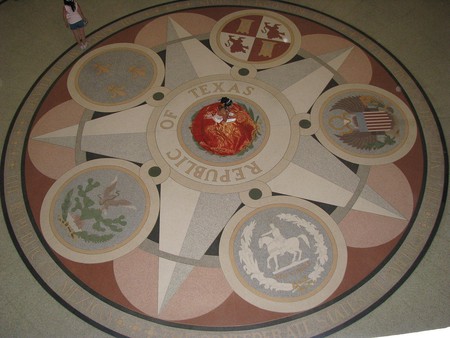 The Rotunda Floor | © Mickey/Flickr
Give us feedback